After multiple versions, the game slows down even more. But it’s still faster than AOE2.

A big reason why civilizations like the French and Rus are so strong today is that they had early heavily armored units, which had few weaknesses.

Like the Eagle Scout AOE2, in order to reduce the explosive power of the unit in the castle age. The designers significantly increased the unit’s training time during Feudal Age. I think it’s a good idea to balance early heavily armored units such as Early Knight and Early MAA who once they start stocking up in Feudal Age and then upgrade in Castle Age, are already overpowered.

I think that’s something to consider. 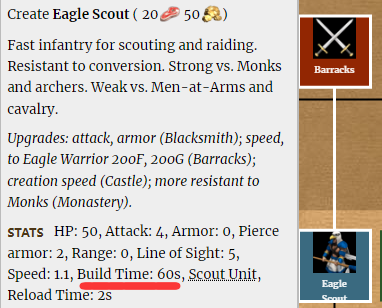 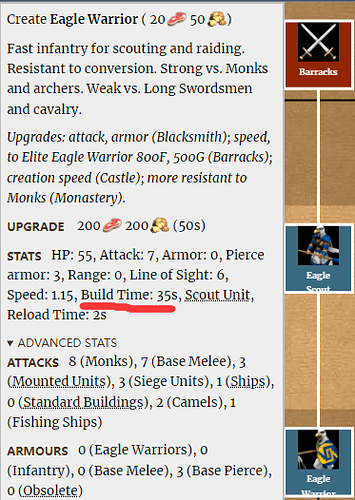 You can make spears dude.

Knights and lancers should permanently take 10 more seconds to train!!! This is all the nerf they need.

In fact, a lot of Spearmans training just delays your death and doesn’t give you any initiative at the tactical level.

You can argue by saying. Just make spears.
And yes spears are an solution to knights.

But then. What about MaA? You literally have no hardcounters against them.

Simply adding Crossbow Units in feudal age would have greatly upset the current balance of 1 and made MAA units too weak.

Civilizations with economic advantages such as Abbas, Delhi, China, and Mongolia will be greatly enhanced as they have been hoarding Crossbow units since feudal ages, the all-powerful units that can be used at the end of the game.

So my suggestion would be to simply increase the training time of all early feudal heavy armor units so that the civilization that had them could use such units for defense and gain a certain advantage. This nerf is relatively mild and can cost more wood to build barracks and stables for similar feudal all-in tactics in the past.

Why are the knights so powerful in France? This is because it only has 30 seconds of knight training time under Landmark bonus, and has technology that can restore health and quickly accumulate amount. If the French feudal knight training time is 40s, I think it is reasonable. Because France does not have the economic advantages of Rus.

That depends how powerfull you make the Feudal crossbows though.

Spearmen counters Horsemen who counter archers who counter spearmen.
Then you throw a Maa that none of these counters.
But a knight counters everything and is only countered by spearmen.
You throw in feudal crossbows, and you’ll be having Crossbow is countered by Horsemen and Archers.
You’ll have a much smoother Balance Circle that is easier to tweak and adjust accordingly.

Only a few unique feudal units with niché roles come outside the circle. Such as Camel Archers, ZhugeNu, Mangudai, and Longbowmen.

But you obtain a much more Solid Feudal-core gameplay.

And you avoid having to tweak around on finicky roundabout game balance tweaks that are far harder to balance, in the form of increased cost/production speed, nerfing techs, or starting income.
That has far more consequences down the line when adjusted.

Also what might adjust well, such as Training Time for 1v1 fights, doesn’t always translate well in a 2v2, 3v3 or 4v4 fight.
but if you have a Solid core mechanic in place, it’s far easier to adjust.

The Crossbow is so versatile, as long as it does additional damage to heavy armor and has more damage than the Archer, I will always choose the Crossbow.

In contrast to AOE2, Skirmisher’s specialized counter ranged units are not positioned in the same way as AOE4 archers. If there are feudal Crossbow, I don’t believe there will be any Feudal Archers. The two units in AOE4 actually overlapped after the castle age. It is the Archer who spends wood and the Crossbow who spends gold. Archers are better than Crossbowmen only at fighting Spearmen, not to mention Handcannoneer.

Crossbow cost gold, archer wood, I think they can co-exist in feudal, just make an early crossbow with less hp, what do you think?

How much HP gap? If only feudal there is a 10HP gap

I would also choose the crossbow

If the entire line is 10HP less

I’ll stick with the Crossbow, because I can kill MAA and knights and even riders faster, and use my MAA, knights and riders against the archers.

Consuming wood is more expensive than consuming gold in the early stages. A crossbow is a perfect substitute for an archer.

I used to think that archers beats crossbows because they are cheap and more LOS and at the end when you both make reinforcements of same units you have a better economy advantage with archers. So I was wrong?

No, you are correct, archers are stronger than crossbowmen against light melee infantry, such as spearmen and landsknecht.

As they do a total of 14 Damage (2 more damage than crossbows)
With a higher Rate of Fire.

Thus their DPS against Light melee Infantry is 9.3 Damage per Second.

So in an archer vs crossbow, the crossbow wins.
Exception is Arbaletier that has +5 range armor with deploying Pavises (Making them exceptionally strong vs archers)
Or longbow men that outrange Crossbowmen.

The reason why you rather stick with Crossbowmen with how the game currently is, is simply because Crossbows are just far more Universal. While they don’t do as much DPS against spearmen as a archer would do, they do enough damage regardless, but more importantly, provide that extra DPS support against heavy armor units such as MaA and Knights, something archers won’t be able to do, and currently crossbows are stronger than archers in a range fight against each other.

Now for my suggestion on adding crossbow to feudal age, also means a buff to archers.

Meaning that Archers should be doing 14 damage against a crossbow who does 12. so in a crossbow vs archer fight, the archers should always win (Exception being french unique crossbow the Arbaletier)

This against should lean back to the core balance triangle i mentioned earlier:

This is just a list of Hard-counters. I.E units that counter specific units really well for related to their cost.

By giving archers +7 bonus damage against Light-infantry, they also become a viable cost effective option against Handcannoneer spam, and would help greatly at keeping them at bay. Handcannoneers are among the strongest unit in the game, but is quite costly and a rather slow moving unit, making up for their strenght.

You failed to include the handcannoneer and ranged cav and yes, the knight soft-counter the horseman in proportion of resources, what’s more, the knight seems to me to be the same or more counter to the rider than the MAA to the archer.

Range cav are unique units to Abb, Mongols and Rus.

They don’t take part in the “core-unit” balance. I.E units that is available for everyone.

Unique Units aren’t really a part of the core-unit balance equation as they require a whole different approach into balancing.

But solid core-balance means its far easier to integrate unique units into the balance without throwing them off whack.

Handcannoneer are late game units that currently has no counter but siege.
But I did refer that a buff to the archers would greatly help against Handcannoneers going out of controll.

Currently, the only real counter towards Handcannoneers are Mangonels/NoB, and Knights/Horsemen.
Knights dosn’t trade to effectivly with handcannoneers, but are able to kill them rather effectivly if they get their charges in.

Horsemen trades well against handcannoneers cost-effective wise. (they do bonus damage against Hand cannoneers and only cost Food and Wood)

If the future does increase the archer’s additional damage to light units.

It’s too similar, MAA will become similar to AOE2 and can only be used later in the game.

The archer can be given a bonus against light ranged units, but it should be a minor bonus because the cost of the archer is cheap. I would give it a +2.

I can’t wrap my head around the logic of AoE4 players. Everything is painfully slow to train but people want to make it even slower? The solution to most of the problems with knights is extremely obvious; make them cost 2 population.

This is the difference between AOE3 players and AOE2/4 players.

We think you can increase the number of barracks or stables to 10 for training units, which will require more space and wood for containment. Players playing AOE2/4 will often run out of space to place buildings in distress, which is something every player needs to consider. You have to fight for space, not just resources.

However, if you only add population cost, it will mainly affect the knight’s late game effectiveness. The early effects were minimal. After all, a 50 wood house is not expensive, while AOE3 requires 100 wood.

if you only add population cost, it will mainly affect the knight’s late game effectiveness

That also seems to be a problem with knights. They’re just way too population efficient in the late game.

lol, makes me think of a meme idea.

What if Knights require special houses? Afterall they are knights. What kind of knight lives amongs the common pleb?
Nah, we gotta make them houses of grandieur. Mansions. t twice as big as a regular house, and allows for knightpop. lol.