So if you all remember a while back when I made a thread on giving Bulgarians a buff, almost every suggestion ended up going through, more notably their siege workshop tech discount and blacksmith buff. This is because despite having great siege, they were generic with no bonuses.

It has always been the norm since AoC where if a civ has access to Siege Ram + Siege Onager + Heavy Scorpion that the civ is classified as a siege civ and therefore is granted a civ bonus.

And now Sicilians is basically where Bulgarians were with their siege workshop.

Don’t get me wrong. The change is good and I approve of it. And I do commend the fact first crusade offers conversion resistance. But teutons get that by default too and they also get Heresy whereas Sicilians don’t.

You’re probably thinking to yourself, well we are out of siege bonuses. So nothing else will work right?

Well actually. I was thinking maybe once you’re in Imperial (you can even put it behind their imp tech Scrutage) that their siege takes less bonus damage.

That way their siege has some distinctive value. I think the civ itself is fine but I really would like to give them a siege bonus that they deserve once they get access to Siege Onagers.

Bombard Cannon will still be a considerable threat as they lack redemption block printing and no real power unit with mobility. So I don’t think this change hurts them too much.

P.S thoughts on giving them thumb ring too?

Sicilians strike me more as an Infantry civ than a Siege civ. Teutons have a better Siege Workshop than Sicilians but aren’t classed as Siege.

But if you really want to buff the civ a bit more, then just make Serjeants a bit cheaper on gold, maybe -5g, and it’ll probably give them enough of a bump up.

Thumb Ring and call it a day.

My analysis of the sicilian buff is actually basically the same as the one from sotl. The biggest weakness, the early game, has not been adressed at all.
Sicilians already were a strong lategame civ, it wasn’t necessaryl to buff them there further, it just makes potential further balance attempts awkward.

That’s shouldn’t be a rule, just because something usually is “that way” it doesn’t mean that it have to be “always that way”.

Just because a civ have FU generic siege, it doesn’t mean that it needs a bonus for them to be good, as much as vikings and japanese arbs are still powerful despite being generic, or like turks and Italians knights are still good even if just FU.

Sicilians siege is still good even of generic, they are helped by the extra wood coming from their farm bonus, and they have great FU meatshields (champs, halbs and serjeants) that takes less bonus damage.

That’s should be enough for now, and their cavaliers and arbs even if generic and not FU, should give them the possibility of doing something different times to times.

But you see, civs without thumbring don’t have them on purpose. Just giving it to all civs makes this tech so “generic” if you understand what I mean.
Just revert the Siege Exception from the less bonus damage

First crusade/faith is actually quite a bit stronger than the teutons bonus. Heres a graph of the cumulative probability of a non-scout/eagle unit being converted: 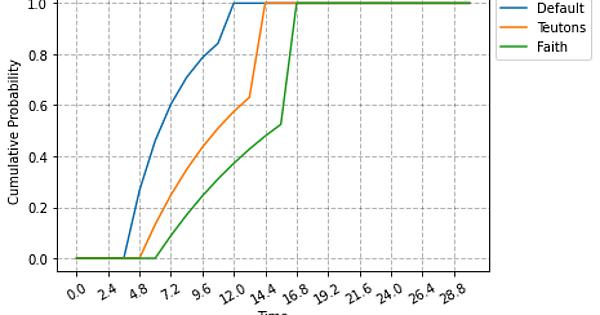 I still think first crusade is going to be a massive pain to balance around. I mean amortizing the cost of 4 TCs and the tech’s cost you still net out at around 70 resources a serjeant. Plus you now have 4 extra TCs and strong farms lol. I’d say see how this patch goes with the changes they have.

They have resistance to conversion after first crusade, quite important for SO

I think they gave the civ siege onager because their siege doesn’t resist bonus damage. Had they given them stuff like hussar or better archers, they would have ran into the issue that the Sicilian would end up with too hard to counter late game stuff, and if the bonus is lowered in response, it becomes useless in many stages of the game.

Making scutage give their siege armour against bonus damage would look as ugly as the bonus they had to come up with to “fix” Indians, in this case because denying a civ bonus to a certain class of units but then giving it as a tech just sounds weird.

Unfortunately I don’t have a better idea. Only think I could think of is making onager upgrades not cost gold but that sounds way too OP lmao.

They have resistance to conversion after first crusade, quite important

It would be quite interesting to see how this interacts with faith. Will Sicilians become the anti-monk civ?
Potentially making them completely destroy arena civ rankings?

It would be quite interesting to see how this interacts with faith.

Nah I just think sicilian SO have one less counter now.

Tbh I don’t like the change at all, first crusade already had insane value (getting instantly 35 units that normally cost more than 3k res for 950 res), and now those units are buffed and a strong secondary effect has been added aswell (that is the same effect of a 1,75k res tech).

Getting instantly for 950 res something that you should spend more than 5k res + train time to get, feels pretty broken to me.

First crusade/faith is actually quite a bit stronger than the teutons bonus.

Its still locked behind a gimmicky castle age tech, and teutons get their bonus immediately. Yes it’s stronger but they still lack heresy which Teutons get.

I’m honestly all for 25% bonus damage reduction for siege upon imperial age. It fits with the theme of the civ without having too much impact.

Unfortunately I don’t have a better idea. Only think I could think of is making onager upgrades not cost gold but that sounds way too OP lmao.

My only other suggestion is Free Siege Engineers. But I think that’s worse than a bonus damage reduction.

Sicilians strike me more as an Infantry civ than a Siege civ. Teutons have a better Siege Workshop than Sicilians but aren’t classed as Siege.

But if you really want to buff the civ a bit more, then just make Serjeants a bit cheaper on gold, maybe -5g, and it’ll probably give them enough of a bump up.

Did Bulgarians strike you as a Siege civ before the addition of “Siege Technologies cost 50% less food”?

The civilization in general needs proper Imperial Age units, not a less useless Teutonic Knight or Siege Onager which is obviously can’t save the day all the time, especially on Arabia.

Yeah, lacking crossbow kinda means that there’s not really anything else to support your melee units, given that the UU is also melee, so the change made sense for them.

Teutons are also in a weird spot, but they do have some good towers, so you can tower rush if the civ is super unfavourtable

and yes Spanish also lack crossbow, but Conqs are a more than decent substitute there

Yeah, lacking crossbow kinda means that there’s not really anything else to support your melee units, given that the UU is also melee.

The point is that you won’t be making archers with the civ, and your range support in castle age is most likely to be siege → so you benefit from the siege upgrades.

Sicilians have quite acceptable good Siege already. And good trash, resisting bonus damage. And an excellent trash counter in the serjeant. And Scutage for some extra gold income.