EDIT: the update is live, we get the new civs and balance changes, DLC drops in a “few” hours. so no new campaigns until the DLC releases.

Seemingly some really nice changes as well such as :

Fixed an issue where, under certain circumstances, units would first move towards the opposite direction as commanded before then moving to the intended target destination.

Might be awesome if this is what I think it is! (edit: ive played a match and it does seem more intuitive now, might be wrong)

they promise the roadmap soon. They also say the “LAST” DLC of AoEll DE. This means is the newest or there will be no more dlc’s? Time will say it.

I certainly hope so. 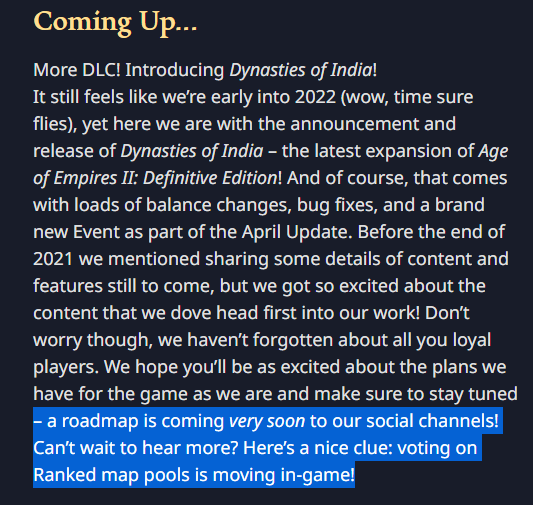 How many more, how many civs?
Edit: i read last, maybe bcoz i read it on spanish?

They just said about a roadmap to chill out the children afraid of newer brother (Aoe 4) getting all attention of MS.

hahaha the first prithviraj mission you cant win because the TCs are destroyed too fast. No one play tested it

strange, i always play it and win. i save both if i have time

No one play tested it

no one, not one person at all

anyway elephants seem really cool, loving the UUs, love siege elephants, so smooth compared to rams. Not sure about the EA yet.

drav elephants are so srongk!

They also say the “LAST” DLC of AoEll DE.

Where do they say that? If it’s what is in the excerpt posted in the thread, they say latest, not last. And it’s worded in a way that there’s more content (including DLCs) to come in the future.

my bad. Im blind 11. Or maybe was spanish traductor?

When I played it there were no siege elephants, so I was able to save both TCs like in the earlier version.

Great, ranked voting will be in-game. A nice UT for the Saracens now as well.

lol Donjon rush is back, Serjeant training time in them reduced and Donjon HP increased.

Donjon rush is back, Serjeant training time in them reduced and Donjon HP increased.

I really like this. Not sure why their TT wasn’t adjusted previously

Watched a survivalist video earlier with someone trying the new donjon rush v Persians. Seemed more viable. That huge foot print is still a weakness. Which is fine. Fwiw the Sicilians lost.

But trushing in general is stronger, which is ultimately a nerf to Sicilians as donjons are simply so much more expensive