We need regional unit skins now more than ever

Now that we have like 3 different hussar skins in the game, specific castle designs for individual civs and so on, we now more than ever need proper official region-appropriate skins for all units. If for nothing else, at least for the sake of cohesiveness and consistency. We are almost approaching a point where we have a 2 tier system as far as visuals go in the game where some of new DLC civs are getting more and more unique visual indicators (buildings, units etc…) that set them apart from their regional counterparts while all other civs are just generic amd the game’s visuals is starting to look like it is some kind of incomplete graphic mod with missing and incomplete assets rather than a fully fledged official release version of a game.

And please don’t start with the “oh but it’ll be too confusing”, seriously if having 3 hussars that look almost identical isn’t considered confuising then unique skins for other units won’t be either. Sure might take some getting used to, but we’re not morons, we’ll learn the difference soon enough and get used to it. 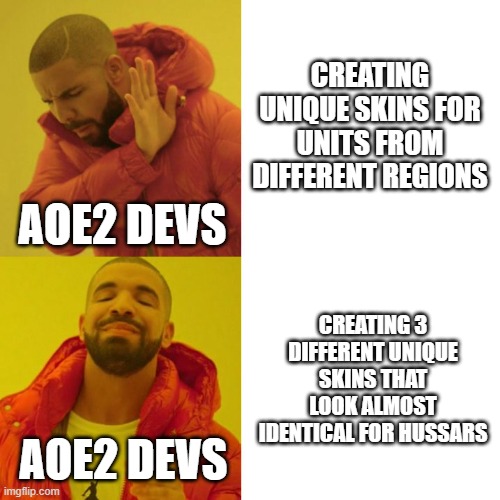 i dont understand what you are asking for. do you want the game to have more unique units? are you complaining about the new unit the winged hussar? are you asking for different skins for the same unit? your goal is not clear

Ok editted the wording, is that clear now?

Wouldn’t it just be what most people want? Civ specific variations for each unit skin, at least the major units: Monks, Swords, Spears, Archers, Skirms, Knights, possibly Scouts, possibly Villagers, and maybe some other stuff I’ve missed. Also unique castles, and eventually totally unit architecture sets for each civ. Such things should probably be optional for each player.

itd be nice to have suble differences between units across the architecture types.

we already had this concept explored with meso-monks vs other monks.
Arguably thats a nice specific case because monks are so unique compared to other units, so it doesn’t ruin readibility.

I for one would like to see this started by at least having unique castles graphics for each civ. They are large and unmistakable, thus its the perfect and easiest entry into this concept. Which I think is comparable to unique monks - as it doesn’t hurt readibility to have unique castles.

If you were going to have it for the core units however, the changes would have to be subtle, on the plus side, they could use the same animation, which would make readibility very nice (you’d be surprised by how much you see a unit more by how its moving than what it looks like)
I think this is definitely something that is possible.

They should test it out on the spearman line only for example, and see how everyone responds

Ideally almost all units would have civ specific variants, but it would all be optional in the settings, in terms of which ones were turned on.

he’s just trying to state that units that look very similar are different, thus there’s not real reason to say units that don’t look similar have to be the same. He’s making an argument that a readability already in the game is an issue at a similar level to what he’s proposing, thus readibility is not a good argument against his point.

i dont understand why you brought the different hussar units as an argument.

The reason I brought it up as an argument was that, previously everytime regional skin variations would get brought up as a request other players would jump in the thread and yell that it would be too confusing to have slight visual variations for similar units in different civs… but as the hussar shows the game can handle having slightly different looking units without getting confusing. Yes they are different hussar units but the point remains that the skins are very similar and a new player to the game could easily mistake them for being the same unit if they don’t know the subtle variations however this was obviously not deemed a good enough reason to not have these units in the game, so with the same logic it shouldn’t be a good enough reason to not have regional skins for units either.

he’s just trying to state that units that look very similar are different, thus there’s not real reason to say units that don’t look similar have to be the same. He’s making an argument that a readability already in the game is an issue at a similar level to what he’s proposing, thus readibility is not a good argument against his point.

Thanks for explaining it… yes basically this is the argument.

I thought it was evident what I was trying to say, but apparently not… hope it makes sense now.

Wouldn’t it just be what most people want?

Well you’d think so, but apparently not, a lot of people have argued against this in the past on the grounds that it’ll affect gameplay negatively due to readibility issues.

Well it doesn’t really apply. Those three units look different because they are literally different. They aren’t the same unit.

Yea but they CAN be confusing for new players. THAT’s the point. And if you wana get into a debate about its actually kimda worse that they are different units, since if you somehow DO get confused about what it is you’re up against it can have a bigger negative effect on your gameplay experience.

That’s why it has to be optional settings for each unit.

Sure, fine, whatever, I have no issue with that. Let’s bring it in as an optional feature then.

They look nothing alike one guy even has a spear.

They look nothing alike one guy even has a spear.

To an untrained eye they might look the same

Only thing common about them are the wings,even those look different enough.For a completely new player everything would look confusing at first.

Do we need regional skins for units,absolutely.but saying hussars look the same hence we need them is a wrong logic.

Why are you all so thick. I am not saying the Hussars are the reason we need them. I am just saying having unit skins that cause confusion is not a good enough reason to not include different skins in the game.

I would suggest first fixing the game with all the current issues, like the broken TG ladder and stuff like that. Afterwards this seems a nice addition. At least make it possible to mod while still playing ranked. That would already be a huge step forward. Currently this is not possible, since when you tried this you have to altern the data, which makes it not allowed for ranked (and you probably also wont get the new balance changes? I am not that familar with modding). Such change will already make a big difference. It will be a huge step forwards to regional units.