What happened to the game they showed us in 2019?

I want that game with that graphics and scale and camera zoom and great walls and buildings.
Was that a scam and a fake?
Or did someone really thought what we have today is better than what we saw in 2019? 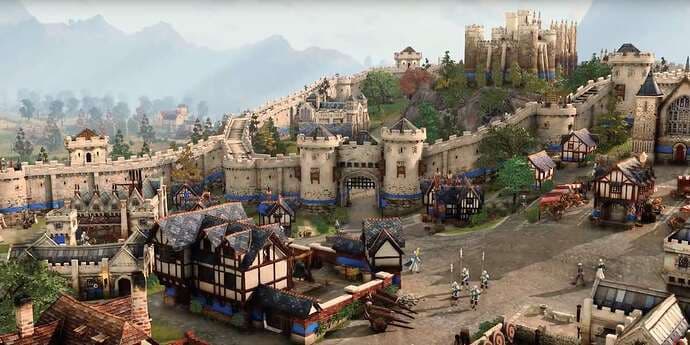 You wouldn’t have that zoom, it is a dev camera

I think they decided they wanted something cheap to develop that runs on iphones, consoles, and old laptops.

Business guys trying to maximize profits rather than making the absolute best RTS they could.

I do think the game is fun, but there is nothing ambitious or next generation about it. The graphics look like an indie game, but they are selling it as a top priced premium product from a beloved franchise.

The sad thing is there is still massive delay in unit response times. Everything feels so sluggish. We get the premium price without the technical or artistic achievement.

It’s not a game. It’s a video. They had assets, they used them to render promotional materials.
That is not a big mystery how game development works.
It’s a normal practice to release things like that, bullshots, or completely fake, handcrafted imitations that are based on wishes and not an actual game code (CP2077).

Unless somebody can prove they had a working, functional build floating among more people than just core devs- IV wasn’t played by people before closed beta. Comparing game to promo materials from few years back is not productive.
There’s a reason why people in the industry started to include disclaimers like ‘not an actual gameplay’ or ‘rendered on game engine’.

There’s a reason why people in the industry started to include disclaimers like ‘not an actual gameplay’ or ‘rendered on game engine’.

It’s kind of sad that some people always think there is a conspiracy going on, not just video games, in everything

It’s kind of sad that some people always think there is a conspiracy going on, not just video games, in everything

You don’t think showing that video as gameplay is misleading?
They showed real units with the same Trebs you see in game today so what makes you so sure it was a video and not a prototype?

There’s already a thread on this same, dull topic:

Hey [10 Hidden Features Uncovered in AoE4's Files!] In one of the points he says that other things that he encountered like volumetric lighting (X019 lighting) and more!

I assumed this as well. Company of heroes is on IOS and Android apparently? If this game ends up on low end platforms, then we know the real reason for “optimizing” it so that it runs on a potato, is that they didn’t want to make dedicated ports, which would obviously be at the expense of the PC platform. In that case, selling it on PC for $60 is a bit of a slap in the face.

Their decisions start to make sense if they want this being played on a smaller screen. Big weapons, bright colours, capped zoom out.

And for low end hardware you have cheaper calculations like recalculating the projectile arcs every x frames. Sniping to ensure collisions instead of working out collisions, etc. They don’t want you zooming out too much because low end hardware might struggle.

Can’t really think of any other reason why they would optimize it to the point of not really being competitive in technical quality despite being such a big name.

Who is even playing an RTS without a PC though? Weird.

You don’t think showing that video as gameplay is misleading?

Welcome to the world of marketing.
I’m not justifying them, but people ought to judge only what’s being delivered, not things like promotional materials from (soon) three years ago.

Even if there was no disclaimer and it was at its core a captured gameplay, it’s still not a legal obligation of any sort.

Almost every time things change, more often than not- for the worse, when game is adjusted to match specific system requirements, and optimized for the broad market. Especially on this level, where there’s a lot of money involved and more often than not- multiple ports at play like with Watch Dogs, or any other major AAA.
It’s very naive to look so far back and expect things like they were shown or promised.

Nothing happened to the game from 2019 because there was no game in 2019, at best some early alpha build.

You don’t think showing that video as gameplay is misleading?
They showed real units with the same Trebs you see in game today so what makes you so sure it was a video and not a prototype?

Even if it was real, how is it a scam? It was pre-alpha footage, things were bound to change. They don’t owe you any obligation to deliver what they showed in a pre-alpha trailer

I would rather have a strategy game where the graphics were diminished so they could squeeze more money out of it by porting it to phones then have intrusive microtransactions that affect the gameplay experience by giving it a pay to win vibe. Or have the game lose official support for 15 years because the developers are losing money on it.