What is the reason for the existence of American Allies?

Probably the Incas will train special vils that are 1.25 times more efficient every time they build Kancha in the next patch. And a month after that, Chimu 2 will come with shipment, receiving shipments a little faster.

Don’t developers have the ability to develop new mechanisms other than to copy the characteristics of existing civilizations and destroy completely existing mechanism?

The only thing Incas have from any Asian civ, is that Chasquis can be a shipment point like Daimyo.
In everything else, they are a copy of Aztecs, not Asians.

With this patch, the Inca got a consulate in 1age card. Please check it.

It is not a Consulate, never was, and they have no Export mechanic that allows them to get European troops for free.
It is a new spin on the Native Embassy, to encourage it’s usage, not an Asian Consulate.

However, its function is exactly the same as that of a consulate. Except that you have to use the card.

The Incas called the Inca Empire Tawantinsuyu, which means “the alliance of the four places.”
So the design has 3 kinds of aboriginal allies. Plus the Incas themselves are 4 kinds.
Although I am not a geographer, I know that the Caribs are not next to the Inca.
The developer may confuse the Caribs with the Tupi.

It refers to the four directions of the Incas, not the native people living around the Incas.

Caribs are added there, because they give Incas upgrades to the Warchief (Ambush Party) and the Jungle Bowmen.

Incas also did not have regular contact with Zapotecs either, but their Lightning Warrirs and Hand Infantry upgrade pair well with the Incas.

For example, the Zapotec option allows you to send a large amount of Wood, and has an upgrade for Hand Infantry damage, taht goes REALLY well with Chimu Runners, making them Vill destroyers without equal, in Age 2.

If the unit is weak, they can buff the unit, but the developer used complex methods and plagiarism. I don’t understand why the developer made such a decision.

They plagiarized nothing, and complex methods are the best way to buff stuff.

The units need no buffs, they are already decent (except Plumed Spearman). What the devs did was make a card more interesting, and need a choice, which is ALWAYS good.

In the game map, South America happens to be these three indigenous tribes.
Maybe the developer just wants to reduce development costs.

Tawantinsuyu means: “four parts together” can explain direction or land or alliance

You might think so, but what I want to point out is that I don’t know why it has the same mechanism as the consulate. The developer couldn’t put up with plagiarism because the consulate function in Asia was so attractive? So, why don’t Haud or Lakota have a consulate? They too initially interacted with Westerners such as the British and the French. And so are many natives. Why should only the Incas continue to receive such a special mechanism?

How is sending a card and getting to select one(!) native tribe to ally with identical to anything an Asian civ can do? It is nothing like the consulate.

Specially when the Consulate is a base mechanic, operating on an alternative resource unique to Asian civs, and it sends out buildings, crates and trickles, instead of direct upgrades. 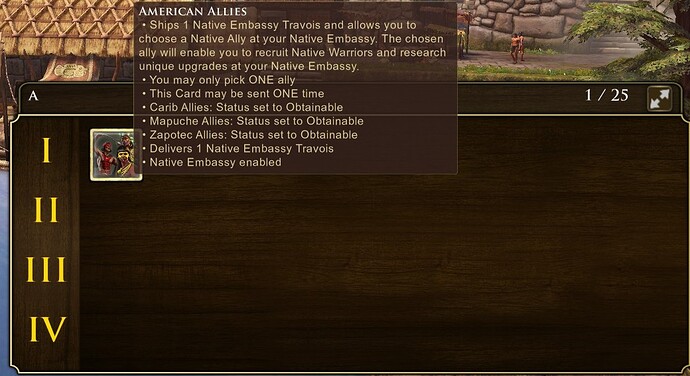 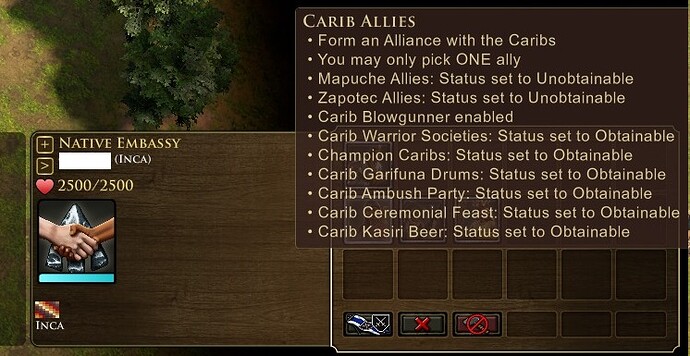 I would like to commend once again that the efforts of the developers who gave up the unit buff and made these cumbersome and useless decisions are truly amazing.

I wish all Native civs had an Embassy card like this. Would make a lot of sence, and somewhat compensate for lacking Mercenaries.

Also, you cannot change your Alliance, like in a Consulate. It is much more permanent.

What happens is that there is a build order with Incas that allows you to have many native warriors at 6:30, (I know people who can do it faster in fact), one of the strongest and fastest rushs you can find, With this change the devs seek to nerf that build, in my humble opinion it is still powerful, but you no longer have the option to create Caribs or Zapotecs, which were the warhorse of this order.

I wish all Native civs had an Embassy card like this. Would make a lot of sence, and somewhat compensate for lacking Mercenaries.

Or maybe do the same to mercenaries, like selecting certain “mercenary contracts” at Saloons/Monasteries and permanently unlocking certain units.

They could have done that, but instead the original devs chose to do with Mercenary Army shipments.