What is this? Matchmaking aint fair at all

Im not whining about that, I am whining why I get teammate that is 250 elo lower than me and plays vs 324 elo higher. Was not even close to 60/40. I am the range of circa ±100 elo, while my teammate -324 elo. For me it was a decent game, but he just got outplayed gigahard and if you think 300 elo dif is nothing then I dont know.

BEST GAME EVER WITH THE PERFECT MATCHMAKING 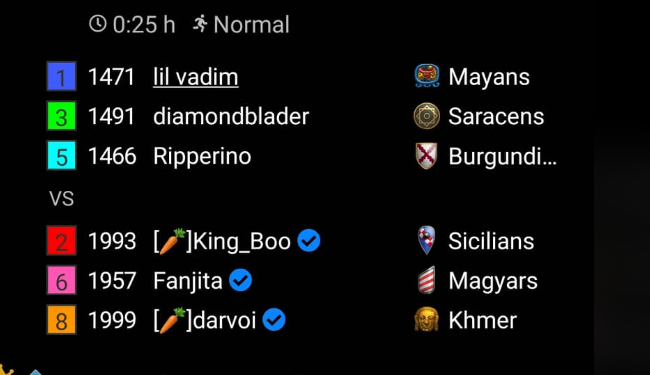 look at other on-going matches. who should they have been matched with instead?
if there is no high level opponent available for them they get matched with somone at a lower level instead. in 3v3 especially this is pretty likely, I think it’s the least played game mode

you are just complaining without providing an idea for a solution

“you are just complaining without providing an idea for a solution”

If you read that guy the solution has been proposed hundreds of times on this forums, mark him as spam he is just defending what can’t be defended on all topics about the same, it is merely spam.

Option number 2= remove time preference, if a team can’t find a match close to their level they should wait longer, rather than getting a match before 8 min mark, at min 7 it matches 500 or 1k elo difference which should never happen.

Option number 3= premade teams can only face premade teams, solo players have to deal with no communication, language barriers and unfair matches all in one game.

There you have mr spammer, you don’t need to attack anyone who is complaining about getting smashed cause the devs have never tried to prevent such scenarios.

i am on the record saying that lobbies should get some form of ranking back. however this will still be smurf-tastic as people can manipulate their elo however they want. regardless, this isn’t a solution for ranked queue

Option number 2= remove time preference, if a team can’t find a match close to their level they should wait longer, rather than getting a match before 8 min mark

I, and many others, would rather have a match against anyone than no match at all. If you need to wait more than 10 minutes to find a match it feels like a dead game

yes it should. if they are the only players online

Option number 3= premade teams can only face premade teams, solo players have to deal with no communication, language barriers and unfair matches all in one game.

“solutions” like this are not thought through, have significant downsides. Other than adding ranked lobbies in some form again I don’t think these are at all viable

Devs dont care current teamgame ladder situation, its just toxic wasteland with current system.
You either get stomped or be the stomper, never fair games as far as ive gotten at 12-15tg level. Its so so so so sad that devs havent cared about it since launch of the game.

I, and many others, would rather have a match against anyone than no match at all. If you need to wait more than 10 minutes to find a match it feels like a dead game

This game will lose more player due to unbalanced matches than queue wait times. Its easier to multitask something else and wait. Another thing about longer queue times, keep current system and there will be fewer players. Why should I spend time on getting stomped.
ELO system exists for a reason, it is to match people within similar skill range. Some max elo dif should be implented or based on ladder positioning.

I’d be interested to know what percentage of the ranked player base are playing just team games. Compared to other online games, circa 20,000 people for aoe2 is already not a huge player base and more than half of those will probably not be online at the same time as you. Also a lot of those 20k are only playing 1v1 ranked, or unranked, or private games with friends, or 1 player offline exclusively. That leaves just the team game players, but only the TG players who typically play and queue online at the same time as you. Then if you want to force them to factor in +/- 100 or less ELO on top of that as well, you have a fair matchmaking nightmare. Maybe they try to match you with players on closer servers too(?) - If so, that will add waiting time too. Either way, the other reasons are already enough on their own.

You won’t like it, but the compromise is to just play 1v1 ranked. Far less waiting time and much much fairer matchups. Getting better at 1v1 also makes you a far better player (and by extension, a better TG player) because you can’t make excuses or blame losses on weak team mates or OP opponents. It forces you to analyse your weaknesses and fix your mistakes.
Team games are by their very nature pretty unfair anyway. Lots of 2v1 situations, picking on the weakest player etc. Even the most equally balanced team games still end up being lopsided anyway, as soon as one team starts snowballing some momentum. The only games which don’t snowball often end up being dragged out into an epic post-late game stalemate. I’d much rather lose a lopsided game relatively quickly and get into a new game ASAP than waste hours and hours on a stalemate.

Also notice how nobody complains when they win an unfair team game against much lower ELO opponents.

“Nobody complains when they win an unfair team” That is what the current match making offers, you might get dusted but eventually you will crush lower players, when stacking crushing lower players is more often but they will never complain, none of those scenarios should happen, but some folks are addicted to easy games one after another.