When the next update?

The last one was 2 weeks ago and was only a hotfix … .

I’d be really disappointed if the regular updates and patches already stopped after only two patches and some hotfixes… Admittedly, the updates were really good so far, however, obviously not nearly enough and seeing how often and regularly AoE2:DE is updated - i know it’s the more “important” game of the two - it just rubs salt into the wound.

next week either at 8th december or 10th

It maybe better though if they take their time with the next update as the last ones came with a new bug!

Love the work from the devs, really great job. Wish I knew how to program and join in keeping the AOE community alive.

I reckon I’d have some pretty good qualities to bring to the team. Particularly a term in engineering (my background) quality control. It’s this concept where, you have a product and instead of just pushing it to the public, you instead have this otherworldly approach of making sure it’s ready for release before making it irreversibly available to the public and ruining the product as it is.

You guys need to give the devs a break, they’ve got a big task. It’s almost like, the more they work on the game the bigger the task gets!

Anyway I’m gonna go buy a new top end computer to replace my i7 9750H GTX1660TI 6GB 16GB RAM 2600MHZ SSD1TB low end PC, re start and re install the game and pray to the AOE gods that maybe I’ll get a chance to play this game.

How can it be better when 2 weeks have passed since the last patch, campaign and AI are still broken, there are memory leaks, broken texts, broken maps, no replacement for incas, a lot of expansion content that don’t apply to the base game, problems with sound files and such. If they were going to release a few patches and then take 2 week (maybe 3) to “fix it”, rather finish it, they should had pushed the game relase. Every week without a patch is people leaving the game and it being trashed in every social media platform and steam and driving away new players. I don’t se any better.

Now, i know it is probably microsoft’s fault and not the devs (entirely), but thats one thing and the other is saying 2 weeks without patches and having the single player content not fully playable is far from being good.

they need to have an ad campaign on YouTube or something so there will be more new players, average daily players is less than a quarter of AoE2

Gaming paused until next update!

Evangelos posted on Steam about a huge update next week 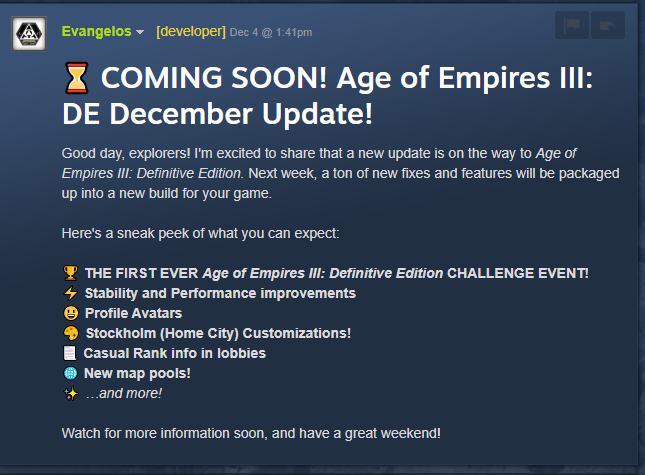 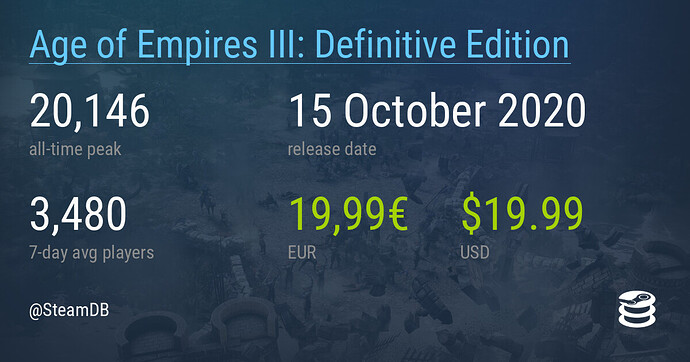 Age of Empires III: Definitive Edition completes the celebration of one of the most beloved real-time strategy franchises with remastered graphics and music, all previously released expansions and brand-new content to enjoy for the very first...

What does this mean?

What does this mean?

another activity 50 minutes ago. probably update is imminent.

Looks like all major releases come out on Thursdays, but given we’ve gone 19 days without a hotfix or update, whereas previously we had an update or hotfix every week, perhaps an exception will be made and we’ll get this one earlier in the week.

They update their internal branches everyday, it doesn’t mean the update is coming soon, just means they are working on it constantly which is a good thing.

The update(public branch) is probably coming on 10/12, 3 days from now

they said december so 31 december

Where did they say that? Everywhere they said that earlier this month, they also promised an event.