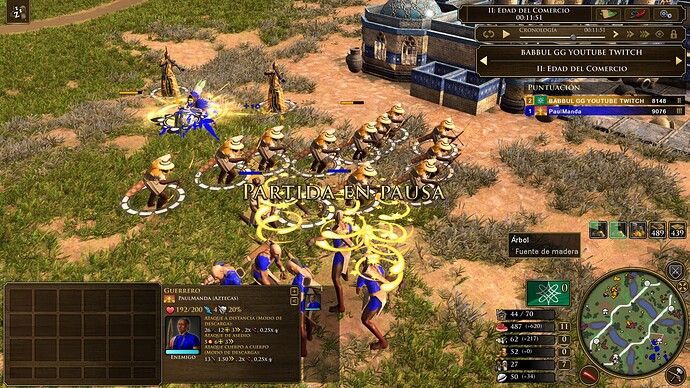 only 2 griot, 1 unit intimidated by each one, but 4 whirlwinds are present instead of 2. This confuses, as whirlwind animation is above other unintimitated units.

What was SUPPOSED to happen if the bug you encountered were not present?
to see whirlwinds only above the intimidated units, not the ones that already died
show on iu area of effect’s size, of intimidation

Attach a SAVE GAME (.aoe3Ysav) or GAME RECORDING (.aoe3Yrec) of the match where you encountered the issue. Link it below if using an external file service.
Grabar partida.age3Yrec (6.3 MB)

iirc griots have 1 aoe on attack, but its not shown on the UI, would be great to see that in game

yes on the image, only two units that are alive are intimadated, the other ones are dead but hey still have the whirlwind

That may be because the units died during the wind-up of the Griot casting the AOE stun attack, so they were affected after already having died. Thanks for your report