Why are the buildings so spread out?

OMG in a nutshell. Yes!

Very true! But urgh. Ugly! The roads and foof aren’t that pretty. Not worth making it look like Wysteria Lane.

Personally, I have let go most of expectations for ‘roleplaying’ aspect that I’ve mentioned before, when it comes what’s going to be included in the final product for us to work with.

I haven’t seen the editor, but clearly, this game is not focused on building mood and atmosphere with small, handcrafted details. Dumbest thing- currently (KNOWING FROM PUBLIC MATERIALS AND NOT PLAYING BETA

) there are like three types of animals? Deer, boar and sheep. That is way less than even in AoE 1.
All map props are auto-generated (fences, roads…). Even in AoE 2 you had banners, torches, paths, city bushes, ruins, tombstones, dead bodies, small architecture and small settlement-related props that can be placed on map.
If that’s not gonna change - buildings alone won’t really help me creating beautiful scenarios rich with identity and detail. It’s a much more straightforward, classic and utilitarian approach to map building.

Even then in Command and Conquer! I remember spending hours in CnC3 map editor, just creating parking lots ha. I don’t think will have a fraction of things to work with from… anything- Cities: Skylines, ANNOs, Tropicos.

I hope I’m wrong but judging by the general design- IV won’t be close to these things in this regard. 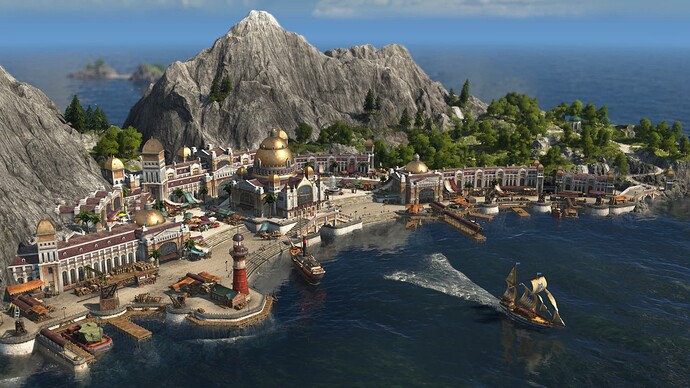 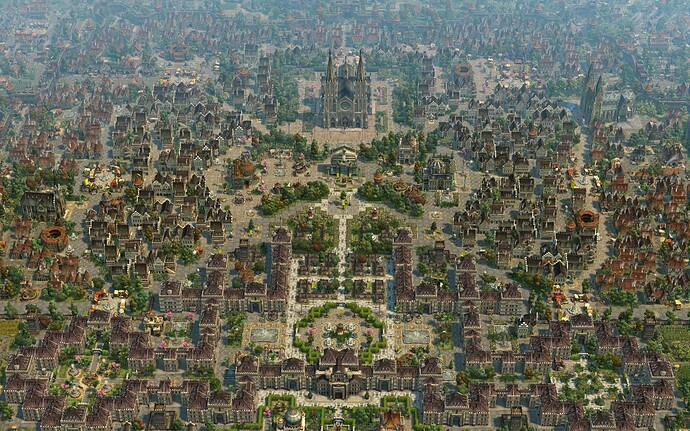 Very good appreciation. There are many art design decitions that I dont fully understand and just contribute to have bad visuals… I wish they could hire AoE 2 concept artist, art style of AoE 2 was ahead its epoch

Nooo, stop. Don’t show us what it COULD be. The comparison really hurts Age of Empires 4 lol. Anno 1800 really outshines AoE IV.

Maybe you should play some game City Building not play RTS AOE series. Have you ever play these AOE game before?

Maybe YOU should play the AOE series once in a while. Close placement of buildings was a big thing in AOE1 (no wall-gates and horrible pathfinding) and AOE2 (leading the flow towards towers/castles/TCs; quickwalling is a staple in pro games). AOM and AOE3 tuned it back, but still allowed gap-free placement of most buildings.
It is a great way of allowing the player to shape the battlefield and controlling the flow of units and plays into optimisation of both military and economy.

I remember when i played the campaigns in AOEII…and i still remember that i was impressed about the design of Paris and Byzantium…i can barely imagine in AOE4…a great city that becomes basically an encampment with some buildings.
Not talking about the city center, closed, inacessible like in aoe3 and aom.
I think that Aoe4 have lost a lot of things.

We also can no longer make walls with buildings, which seems very much part of the Age formula, at least to little old me.

We also can no longer make walls with buildings, which seems very much part of the Age formula, at least to little old me.

If you think of it as an abstraction of real life scaling, it was not silly: Instead of an army having problems moving through a dense urban area, in AOE you have trouble moving through 4 houses with your 10 units.
It also has the mentioned gameplay implications. Do you find them “silly” as well?

It is a great way of allowing the player to shape the battlefield and controlling the flow of units and plays into optimisation of both military and economy.

It’s wrong to cut a feature just because some aspects seem wrong to some people. There are other ways to evolve the feature: The influence of quickwalling for example could be reduced by only making the finished building block unit pathing, not the construction site with 1+hp.

In all previous Age games, blocking unit movement is not some unrealistic annoyance. It is a fundamental feature of what buildings do. Blocking travel is part of the definition of what a building is on the game board: Buildings are not just the the source of training units and researching technologies, but they also prevent units from moving through their space.

Before, if players wanted to spread out, they could. But they also could decide to pack buildings in tightly. Now, all in the name of realism or beauty or something, AoE4 has removed an entire level of strategy from the decision about placing buildings.

By removing this entire feature from the entire roster of buildings, AoE4 has stripped a huge portion of a Building’s usefulness out of the game. Essentially, building placement no longer matters as much in AoE4. Houses are now just annoying things you need to build. You can’t use them to your advantage. Meanwhile, this decision has spread out the game visually, causing all sorts of problems with scale and zoom.

Now, all in the name of realism or beauty or something

If it were for this we wouldn’t have houses for Snow White’s friends.

subjective opinions of the art style are super important, but not specifically relevant to this topic

You don’t have to build them that far apart. In at least in video you can see the building grid and it is very obvious you can build things y much closer together than the cities in many of the promotional videos.

I feel like some of you just want anything to complain about at this point.

I feel like some of you just want anything to complain about at this point.

That is understandable and a risk we all run when we complain. The burden is on us to show others that we are not just trying to troll the game. We are not. I sincerely believe that the decision to spread out the buildings and prevent walling results in a number of unexpected consequences that hurt the game. I’m doing my best to explain as neutrally as I can.

I’d love to see the images/videos you have in mind that show that this spread can be avoided.

I addressed the top post which says nothing about walling. We already know you can’t wall with buildings, we also already know you can build them closer together than the cities in the promotional videos to which he refers. This is just from other clips that have been revealed, not the beta. I am not going to bother tracking them down right now. There’s a reddit thread about it somewhere with images.

“Essentially, building placement no longer matters as much in AoE4.”

I can’t let this statement stand in its current form. Maybe you did not play the beta much or read some public information about it. If it doesn’t bring you joy, you don’t have to play it. Fair enough.

But I have to say: Some entire concepts of civs in this game are built around building placements. Dehli Mosque Network, Mongol Ovo + Outpost Network for example and many more small buffs/ interactions(HRE Fortifications) I cant tell you bc of nda.

If your statement would say: “housing placement does not matter as much”, maybe i could let it slide. But then again even that is kind of untrue(Chinese).

To sum it all up: Yes, blocking with buildings as a strategy is gone. But to then conclude, that building placement as a whole is dumbed down in this game, isn’t particularly accurate I would say.

PS: It sometimes reeks of hidden agendas in here:

Person A agenda: the game is bad

Person B agenda: the game is good

Person a and b will then to continue to post in this forum, but everytime they’ll post something, they have their hidden agendas in mind and their posts must always support these. So they can’t just discuss things purely, just weigh pro and cons. Instead they are bound to their agendas and must uphold the “bad/good” flag.

housing placement does not matter as much

forgive me. housing placement does not matter as much. blocking with buildings as a strategy is gone. I agree that there are other ways in which building placement matters, and I definitely should have mentioned that.

thats how it often worked historically tho, small settlements would only put some pallisades between larger buildings and then let the building themselves act like a part of the wall.

While age tries to be as historically accurate as possible, they do prioritize gameplay over accuracy almost always.