Hey devs, do you know there are other communities outside of the sweaty tryhards? why the hell do you only cater to them.

Max pop size 200, no more big battles, RIP Real world diplomacy games, what the hell are you doing? turning this into an E sport game? whyyyy …

atleast allow us to change the pop size in custom scenarios, don’t force people into having to make increasing pop size mods because you couldn’t figure out how to get good performance for a game in 2021

What’s next? biggest map size is 6 player size? bringing back pop cap for buildings? what the ■■■■ man…viper isn’t the only fella who plays the game

Also for the people mass flagging this post as “offensive” to take it down, take a step back, go outside, do something more important with your life.

They said the AoE4 economy will require less villager than in previous games. So instead of a 50/50 split being optimal, we might end up with only needing say 25 villagers for optimal eco. Or something. We’ll see.

it does not justify making it that ■■■■■■■■ low, like jesus christ atleast 300 is acceptable, but 200? what do they NOT know how to get good performance?

I’m a little bummed about 200 max pop (only for multiplayer? not sure), too. I don’t know that such a low amount has ever worked well for AoE or similar games. If we bump into that ceiling frequently whatever game modes it’s encountered, it’ll be disheartening.

If a player wants to play single-player vs. AI and they have a good PC, and in unranked MP games, will it be capped so low? I hope not. If it is, I’d have to imagine it’ll eventually be increased someday, just as it was for AoE2. With object-oriented programming (OOP) or whatever equivalent that got used, it seems the “200” could be changed in the code on a whim. And if single-player or unranked games have a 200 cap, could it be an option we can increase? It may present balance or gameplay issues or impacts, etc., if that’s a concern – but as with any AoE game, those things get sorted out over time.

Wasn’t the original AoE2 pop cap like 200, too? That was too low for a long time. When it was finally lifted to 400-500, we finally felt less restricted gameplay and far fewer, “Can’t build more units” error messages.

I bet players, in general, would grow tired of 200 pop cap pretty quickly, no matter where it was in the game (Ranked and Unranked MP, SP vs. AI, etc.)

Completely agreed, the building pop cap was one of the things that threw me off from AOE3DE

Is there a link or citation to the statement that it’s a hard 200 cap on every type of game?

I mean, I get the frustration, but honestly I think 200 pop that’s actually 1:1 and not elephants that cost 10 would be an acceptable effort. It’s a 3D game, that’s to be expected, AOE 3DE only gets to 250 with a bonus and that’s a 10 year old game. Honestly from what I’ve seen AOE2 also barely is able to handle the maximum scale of those massive diplo games in any version so I don’t know how you think it’s supposed to be handled but every unit and building is a 3D model.

Each Age game does super different things.
1 has a slow and casual pace
Myth has activatable abilities out the wazoo god powers and over the top units
3 is diet Warcraft 3
One of 2’s things that it has and 4 doesn’t might just end up having to be big diplo games

Is there a link or citation to the statement that it’s a hard 200 cap on every type of game?

I don’t know about every type of game. I hold out hope the cap is only for multiplayer, if anything. I’ve edited my post to reflect my uncertainty about everything

I remembered this post, but I see it’s only saying multiplayer (see screenshot below). 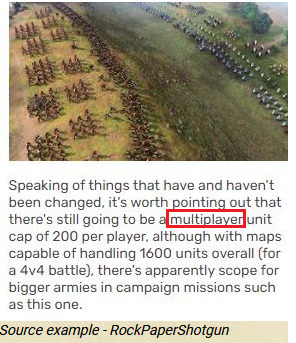 I thought I saw another post recently, too, that quoted a podcast/interview where it was mentioned the 200 cap was pretty firm. One that talked about the villager-to-military unit ratio, and how there will be fewer villagers and more military units. But I could be wrong… I can’t seem to find that post

I very much hope that the 200 limit just applies to ranked matches and we can just change the number in the lobby.
Or even better increase it for ranked too. 300 doesn’t seem unreasonable.

Devs only said that the game is being optimalised for handling 8 players with 200 pop each (1600 total). Nowhere it’s stated that in a 1v1 it cannot be adjusted to 300 vs 300 or something. So this complain thread is a bit premature in my opinion.

I think it would be reasonable if 1600 was max overall for the map, it sounds good, but if its 1 v 1 then 800 unit cap for each player would be very cool. I remember when me and my cousin were playing 1 v 1 we got 1000 unit cap mode and it was much more fun to play.

its not confirmed. XD

MAN chill OUT, its NOWHERE CONFIRMED , they only said that they optimazing the game for 8 players in 200cap, BUT in 1v1 they doesnt say nothing. Sooo This is a stupid topic.

Lack of info on differing amounts =/= confirmed 200 lock. I bet it is customizable

200 pop cap without any exceptions would be really sad.
At least let me edit the pop cap in scenario editor, since i dont really care about competative gameplay. Do with ranked games whatever you want devs, but leave other players some room please.

AoE 2 had when it launched a limit with 200 too. In a dlc they increased it from 200 to 500 so there is hope. Still you are right and it´s something I expect from the beginning.

lol, just imagine if they made us buy a DLC just to get more pop cap … 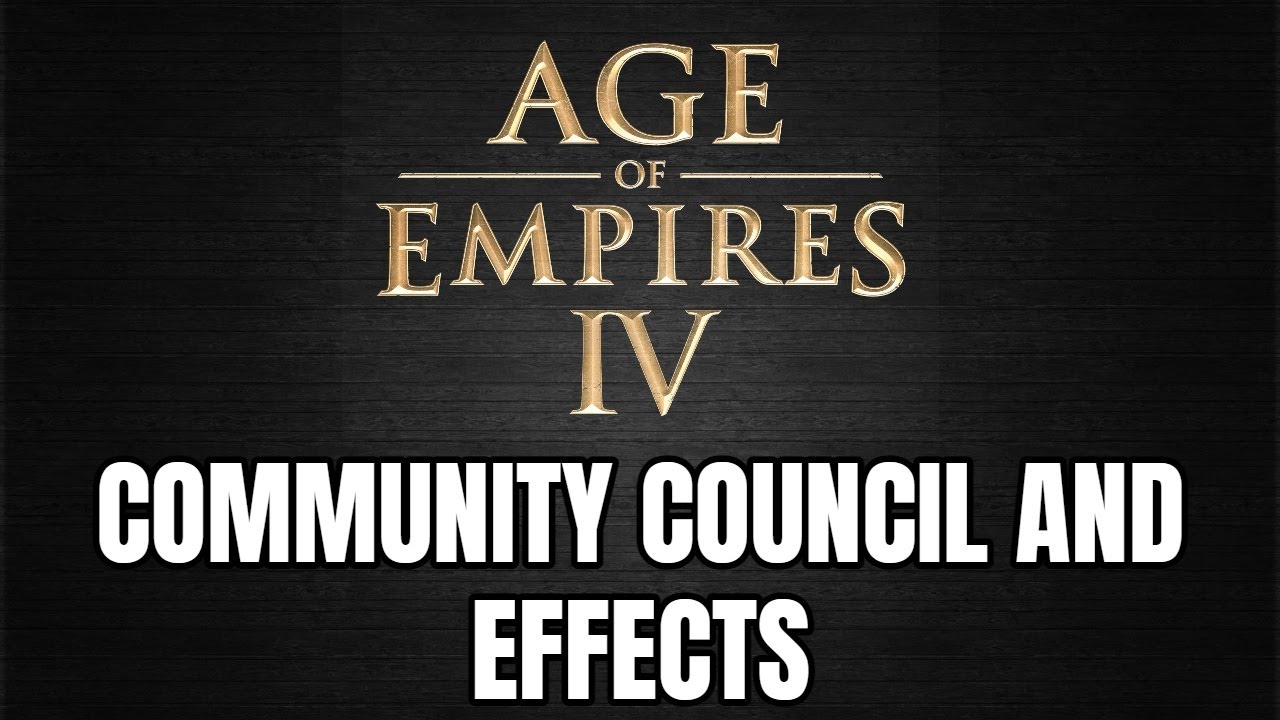 Are lots of people concerned about this? Battles in these games turn into such mosh pits anyway that I have no desire to go over the 200 pop limit, even in aoe3 with the units taking different pop amounts.