Why does it take so LONG to load the MENU/SAVES for a SAVED REC/GAME?

I literally waited for 1 min and 35 sec to load the menu. Typically the menu would load and the spinning load icon would come up, but i cant find out how to fix it. I deleted most of my rec and saved games to see if it helped, but no. here’s proof for how long it took. ---->

anyone else have this issue?

anyone else have this issue?

all the other menus load instantly

Not sure how my specs affect load time. I have 36gb of RAM . lol. should load with no problem.

yeah i got a 1tb SSD as well. another menu that has long time loading is my hotkeys menu…

Move your older recs to another folder and leave just the ones you want to watch. This works for me.

Empty your folder should work

I have the same problem and for some reason it hadn’t occurred to me to delete anything!

My understanding is that recorded games from older version don’t work anymore anyway. (Not sure if this also applies to saves.) Is there a way to auto-delete them? Or at least an easy-ish way to delete just the unusable ones?

That happens because you probably have too many recordings in that folder, somehow whenever the game is reading load games it also looks for online data about the details of the game/ranks/nicks etc, as other suggest cleaning that folder will decrease the loading time, also you should erase all your recordings whenever a new patch is released cause it wont be compatible anymore, meaning that those files wont be useful anymore.

For me the amount of time it takes to load scenarios depends on the number of scenarios in the directory. I’d assume it’s the same for saved games, although I haven’t tested that explicitly like I have for scenarios.

Personally I maintain separate folders where I move older saves, recs, and scenarios as a workaround to this annoying problem.

But then the question is why it takes so long to get that online data?
Same thing when you hover over someones avatar to see his elo. That loads like 20 seconds. absolutely ridiculous.

I tried this already kinda. i’ll move all my saves and recs to another folder instead of most of them and will see.

I think i dont have any old recs but ill check

I just cut and paste ALL my files from the folder and it’s still taking the same amount of time to load. My hotkey menu takes awhile to load as well. must be a bug somewheres. 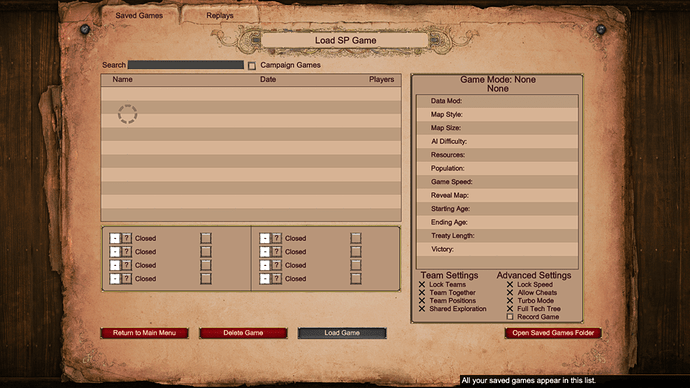