Why handcannoneers in game use different generations of guns？

They wanted to include as much AoE2 stuff as possible because they were afraid AoE2 fans wouldn’t like it.
Also giving everyone an Matchlock Arquebus would make the game look a little more modern and people that have no idea about history might think that’s not medieval enough.

Hand cannons just look so wrong next to Culverins and Landsknecht. Especially when the Landsknecht is unlocked in Castle Age already.

Hand cannons are still too primitive. Arquebus were when firearms really start to take over traditional bows and arrows. The latter fits better as the in-game role of “late game super unit”.

Also the weapon panel of janissaries write “trench gun” which is also super weird. First of all the weapon is obviously the same arquebus of Rus strelets (labelled as “handcannon”). Also “trench gun” is a term usually referring to WW1 shotguns.
I know this is to indicate they have a different role, but the naming is very inaccurate. 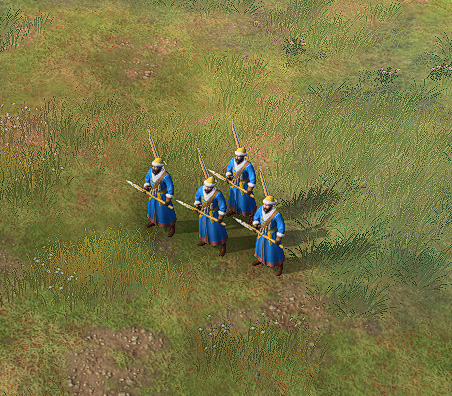 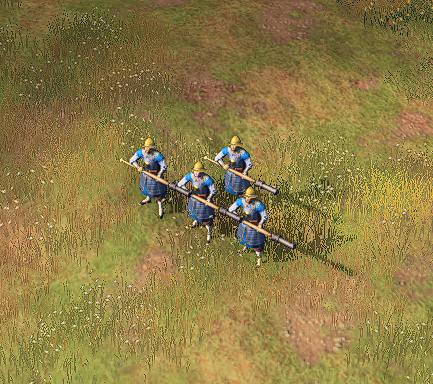 Yeah at this point just to standardize the technology I would prefer Hand cannons to be an age 3 unit for China, able to be upgraded to elite, (and move Xbows to age 2). Everybody else should just get Arquebus style guns, but Janissaries can continue to get them in Age 3 as a nod to Turks being the first to invent them.

The Malian Musofadi Gunners are completely out of the late medieval time period. Their guns look like late 19th century rifles, which is too late given where all other civs periods take place. It may be historically accurate, but too far ahead of the rest. 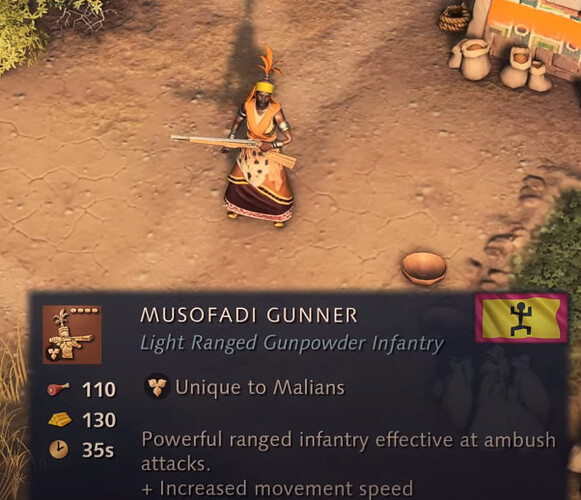 Can’t wait for them to at the US with Gatling Guns to AoE4.

I think they can add a new generic arquebusier unit to most civs with a similar role so that janissary is now a unique arquebusier not a unique hand cannoneer.
I do not know if this is likely. Previous AOEs have all added new units to existing civs though, and AOE4 is reworking its navy for all civs.

The Malian Musofadi Gunners are completely out of the late medieval time period. Their guns look like late 19th century rifles, which is too late given where all other civs periods take place. It may be historically accurate, but too far ahead of the rest.

musofadi gunners are confirmed to be a unit from the 18th century , devs did their research so malians could have a gunpowder unit so they dont fall behing other civs

So that’s right into AoE3’s time period, colonial to industrial.

It bothers me that AoE4 takes so many liberties with each civ’s time period. Longbows were already rarely used by the 1500s, but then we have them clash with 1800’s guns.

That’s lazy. Like saying: Mesoamerican civs didn’t have gunpowder so let’s add WW1 soldiers to balance it out.

yea but well , i dont care about having musofadi gunner tbh

Imo, they should change generic Hand Cannon to Arquebusier. It’s obvious at this point that AoE 2 people wont like the game, there is no longer a need to cater to them.