Why has Nomad been so heavily edited?

Title. As a player who has played multiplayer 2v2, 3v3, and 4v4 Nomad continuously for at least 7 years now, the state of Nomad on the “Definitive Edition” has been disappointing to say the least.

At launch, the map had almost no gold on it, and massive mountains preventing players from quickly placing their town centers. Then the gold issue was fixed, but the mountain issue persisted for a long while, and now, the mountains are removed, but much of the map’s identity and strategic options have been removed alongside the mountains. Here’s what I mean: 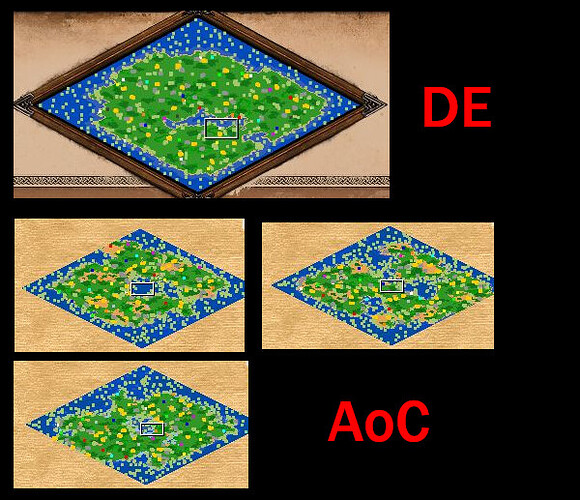 I would take more screenshots of DE nomad seeds, but apparently generating 8p size maps with 8 players in the scenario editor results in the game crashing to desktop on the second generation. Definitive indeed.

Fortunately, there is little information lost from this, as the current Nomad.rms file results in nearly identical nomad generations every time.

The middle water, while once often expansive, and sometimes even separated into multiple sections, is now always small, and often insignificant.

The landlock, i.e. the portion of the map where the land and the edge of the map meet, previously a key part of strategizing when playing Nomad, is now wholly nonexistent. Every game, experienced nomad players would ask their team “where is the landlock?” or they would flare the land lock themselves if they found it, because it provides key information for players to make strategic decisions. Why was the landlock removed from the game? The same thing can be said about the middle water, where players might have once asked their team “is the middle water big?” now have that question answered for them, as it’s small almost every time.

Now, the combination of villagers shorefishing at docks (so they can make 2nd and 3rd docks nearby consistently) feudal age fire galleys, and no landlock, has turned the game too often into a race to circle the entire map with docks and fires. Water was always an important component to Nomad, but it was never this one-dimensional.

I ask the devs to return Nomad to something more akin to its original state, where each Nomad seed felt truly unique, with the landlock and middle water variability being a big part of that.

I do not understand why they made such changes aswell, the original nomad from aoe2 the conquerors was pretty decent, we had tons of variations. It could have had some small tweaks ofc, but what we have today is very different and leaves a lot to be desired.

i don’t think they gave a reason

if i had to guess, it was because of whining from some 1v1 players

i think making coastal generate identical water all the time might make it a better map. but i don’t like that they turned nomad into something else. and nomad was mostly a teamgame map anyways

the map pool has too many scenarios and not enough random maps. nomad used to be one of the good ones

I think they streamlined it for use in tournaments. While a big portion of the player base likes nomad and would like to see it in tournaments the old map could be unfair.
Especially the landlocked side meant that you could send your first galleys into a completely wrong directions in 1v1s and some players might be trapped behind several enemies on water…

I don’t know why they changed the water in the middle though. Right now it’s always small, does not have much fish on it and does not create a barrier (by connecting to the outside water)… So it serves no purpose…

I would change it in a way that it at least provides one of the 3 things mentioned.

By the way, if you like unusual Nomad maps there is a map script in the mods section (I think it’s called:) “Mega Random Nomad” which has always a standard Nomad start but very different maps and resources…

I don’t know why they changed map script a lot. just trying to remove bugged maps enough. Like Arabia map is from Age of Kings and its famous most played map. Why they played with cliffs, hills, Woodline(wallable) and other stuff?

I saw arabia map from Age of Kings/Conquerors finding resources too hard because it’s too random. But still I think old maps better because too random makes another challenge in Dark Age.

it seems like they went with a very safe approach to map scripts, to create the least amount of variation and thr maps being as standard as possible.

just think of the arabia script we had at the first few months, where resources just spawned at a direct cross from the tc every single game.
Megarandom is also wayyyy less random nowadays (other than starting with weird buildings, it just feels like a random choice of standard maps).
Arena no longer has back resources, which is a way more standardized approach (and one of the few i agree with).

thats just their attempt at safely balancing the maps for ranked. I cant say i like it, but i understand it.

the old map could be unfair.

I ask the devs to return Nomad to something more akin

Because people already complain nomad can be unfair in ranked as it is… Retuning it to its old format will just cause even more complaints about RNG in ranked where you’re supposed to be provided with a more balanced match.

Off the top of my head from my nomad matches today. Opponent had zero gold for about 1/8th of the map except one pile far forward which was easy for me to wall. Another map i couldn’t for the life of me find food near me other than berries while opponent after minimal walking had a boar deer and snagged a bunch of sheep.

Every map can be unfair, and I see the changes implemented by the devs didn’t do anything to prevent the unfairness you experienced in your games. How does middle water and land locks affect how players find food and gold consistently? It doesn’t affect it at all. It’s about making the map unique and exciting, aka what nomad has been for 20 years, versus the same scenario again and again, which is what it’s becoming due to short sighted developers.

I am really disappointed in the changes to the nomad map. I have been playing the original map since zone days. I can’t think of any logical reason why they would have changed the map with all of the awful new maps that they have forced us to play instead. Why can’t they allow us to play the good old maps and allow people to not play maps that they dislike. Nomad has never been a fair map in a best of 1 or even in a best of 3. It however is a map that requires a lot of game knowledge and skill in adapting to the randomness and unfair features that the map has. Nomad has always required people to explore and adapt except in the current version where resources are always near town centers. In the past there was a trade off in looking for a good spot and dropping a quick tc.

Nomad and land nomad just have the name of the old maps, they are just different maps, ln has no berries on DE, deers are scattered in small groups of 3, boars are alone and the same behavior has the nomad with the hunting, both maps have bad gold/stone spots, original nomad usually had the gold in one side of the land, but at least when you were able to find hunting you could go up with that but on DE, you need to find several hunting spots.

They should change the names to Ln DE and nomad DE, so old players don’t get confused.