Why is there focus on monks? - Question to the devs

I noticed that many civs have unique kind of “monks”. The Prelate, the Warrior Monk, the Imam and the Scholar. Why is there such a focus on them? Do you want to promote healing or playing with the control points? This seems very unusual to be focusing on one unit class that is shared by many civs. Rather than making only 1 or 2 civs with unique monks, it seems to be the norm to have this kind of support class with different civs. There isn’t such a focus on other unit “classes”.
Compared to the other popular RTS title by Relic, it might be that they imported the idea of non-combat support units, since such a equivalent in this way wasn’t so fleshed out in Age of Empires 2.

Each civ has a variation of the monk because of the sacred sites win condition.

but this doesn’t justify making monks with different skills. One can capture them with generic monks as well. There is no variation on wonders (so far), pikemen or tretbuchets. Why monks? Other units are also needed for conquest.

It feels a little bland at a first glance with most civilizations using different variations of the same monk class.

I don’t get it, how is it bland to have variety?

There is no variation on wonders (so far), pikemen or tretbuchets.

but this doesn’t justify making monks with different skills. One can capture them with generic monks as well.

Having unit variation is always interesting for a game with different civs.
I feel a lot of the monk variations are super fun as well. (warror monks, prelates, etc).

Why is there such a focus on them?

I think the answer here is that they want to highlight the cultural/religious differences in civs. Making unique monks is a nice way to convey that.

there is a variation nonetheless, but that is focused on one unit class.

Because the devs were given a MWGA directive by Microsoft.

but this doesn’t justify making monks with different skills. One can capture them with generic monks as well. There is no variation on wonders (so far), pikemen or tretbuchets. Why monks? Other units are also needed for conquest.

Hm, good point but it would also feel very bland for all the civs to have different variations of the same Pikeman class. Your logic, not mine.

You’d be the 1st person on these forums to complain about too many unique units.

Seeing as you are in the beta I assume you know stuff we don’t so I take this post to assume that there are variations in one of those things, henceforth I declare you have broken NDA, henceforth I shalt smite you down with the holy law of reporting (jk)

Nooo I was trying so hard to be vague about it!

You think having variety in the monks makes the game more bland? How does that make any sense?

I think many of your are bored waiting for the game and just want to complain about something.

very true. That’s why I’m wondering still, why there is such a variety on monks and not other unit classes. It’s not so much that I’m complaining, but what is the idea behind focusing on different monks? I’m just curious, since this is definitely a new route that wasn’t there in Age 2. I edit my main post to be more clear about this.

All in all, I’m quite happy with unit diversity, just using such a support class is very unusual in my eyes.

All in all, I’m quite happy with unit diversity, just using such a support class is very unusual in my eyes.

Maybe because monks have been shoved to the side in other games for the most part and they wanted to actually make them useful? Just RANDOM guess…

very true. That’s why I’m wondering still, why there is such a variety on monks and not other unit classes.

There is probably much more variety in other unit classes that we don’t know about, we just know what they have revealed. What game do you know about that reveals EVERYTHING before release? That being said, we need to see gameplay, their marketing has sucked hard

I think the question should be why aren’t other units at least as varied as priests.

No. He did not break the NDA. He doesn’t need beta to figure out that not all wonders are the same. According to already made public info every faction appears to have unique ones because some of them involve unique units for example the english: 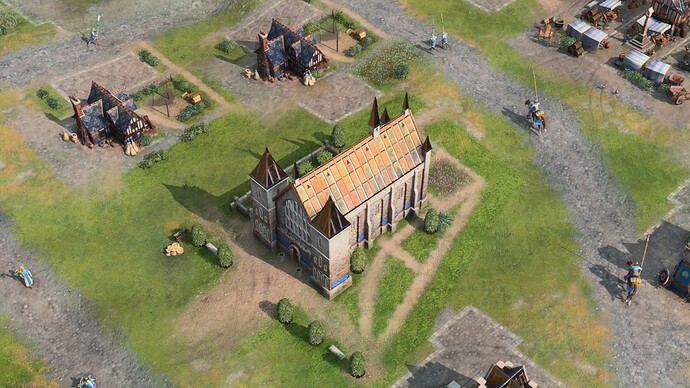 “Age 2
The powerful and
versatile Longbowman becomes
avaliable in age 2. The Council
Hall, one of the landmarks bringing you into Age 2,
produces Longbowmen faster than
an Archery Range—making the
beggining of an expansive
army”
(ps. I am quoting this from a completely public post at the bottom of the page on the English civ at ageofempires.com)

Monks represent knowledge, culture, and healing. Something one of Ensamble Studio’s lead civ designers (Sandy Peterson) mentioned recently was monks being too powerful in AoE1 and too heavily nerfed overall and too de-emphasized in AoE2. Monks are a tricky thing to get right. I like the idea of monks covering a huge spectrum of utility from research to straight-up battle monks. I’m honestly impressed! Plus, I think it adds a lot of unique flavors to each civilization since these religious units emphasize what different cultures valued in their societies.

Thank you very much for your response! Do you have by any chance the source of that interview? This is very interesting and might be the main reason. Edit: Found it: What Relics/Monks Were Really Supposed To Do - YouTube
I thought about the role of Monks yesterday as well.
From the game play perspective, it’s hard to introduce support units in a medieval scenery, but they are a part of many RTS games. So the monk might be the bridge to introduce certain interesting buff/spellcaster effects that otherwise wouldn’t be applicable.