Why No USA in Multiplayer AOE 3 DE?

Since the entire game takes place in the Americas, except for The Asian Dynasties, wouldn’t it make sense to have the USA as a playable faction in multiplayer? The faction exists in the game files as it is the primary campaign civ. Thoughts?

I missed any image in the trailler and in the screenshots of the German and Iroquois civilizations. Hopefully they are not biased, Germany is the favorite playable civilization.

I see what you mean. The difference though is that the entire base game and The Warchiefs are about the USA. The civ already exists in a quasi balanced form. With a few tweaks it can be usable in multiplayer.

I think they will add new factions as dlc later

america is a revolution option for Britain and France, who you know colonized the new world.

america is just a break away state, the game is about the colonization not about the post colonial power dynamics.

So we arent getting any new civs??

Incas and Swedes. Look up

we’re getting inca and swedes for now.

we’ll see in the future if we get more like maybe denmark or austria.

Since the entire game takes place in the Americas, except for The Asian Dynasties, wouldn’t it make sense to have the USA as a playable faction in multiplayer? The faction exists in the game files as it is the primary campaign civ. Thoughts?

You do have USA lol
Revolution is a feature available in the AoE3. It allows European civilizations to revolt from their home country and form a new country.

Play British to Revolt into USA. 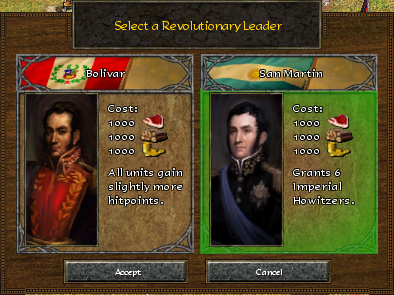 Revolution is a feature available in the Age of Empires III: The WarChiefs. It allows European civilizations to revolt from their home country and form a new political entity with additional unit types and specific bonuses which greatly boosts the...

Probably, he wishes to have US flag on buildings from the start

Why not? Even US took part in colonisation, but in different way than Europeans (Philippines). However, how to distinguish them from British, since as non-American I do not know about any uniqueness of the Americans at that time. Maybe kind of rapid expansion as settlers came in?

The USA won the Revolutionary War with mainly hit and run attacks. Units such as the militia with bonus vs musket line. Raiding units and strategies. Attack bonus vs native units. Extra tc an age early to represent expansion. A lot of possibilities to make them unique. They would be paired well with a Mexico civ to make the 1800s much more enjoyable to play in.

Yes iliAGSPili. I want that flag from the first age on.

If you slightly mod your game you can play with the campaign civs on game ranger/LAN without causing desync!
So you can play with Americans from campaign on skirmishes online but you get no starting res and no explorer, so it really sucks. Cards are also not that great.

USA is like brits but you get skimirsher instead of longbows and you can train rockets directly in age 4, which can be quite good or borderline op.

But it’s really fun to surprise random people online with campaign civs showing of as a hacker, (even thought regular civs are far superior)

Its very fun to train a batch of 5 rockets in age 4, costs 100 wood and 500 gold each and a very long time but then people really start calling you a hacker…

Even then brits is superior.

Malta can only go to age 3, can’t train facolnets but can sent mortars in age 3. Fun for a ridiculous base destroy rush but generally also useless civ.