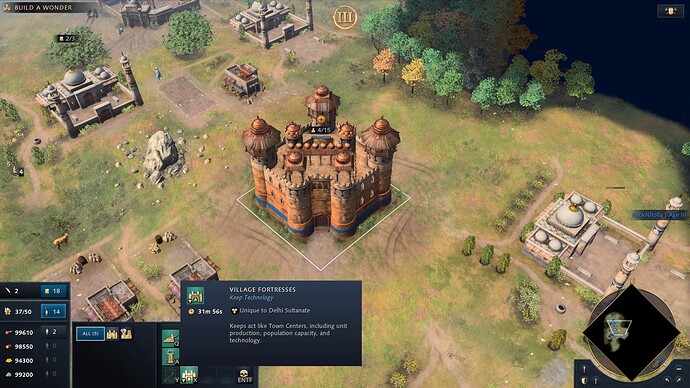 For some reason piety and herbal medicine are taking much longer than 3x the “original” speed. Screenshots provided: 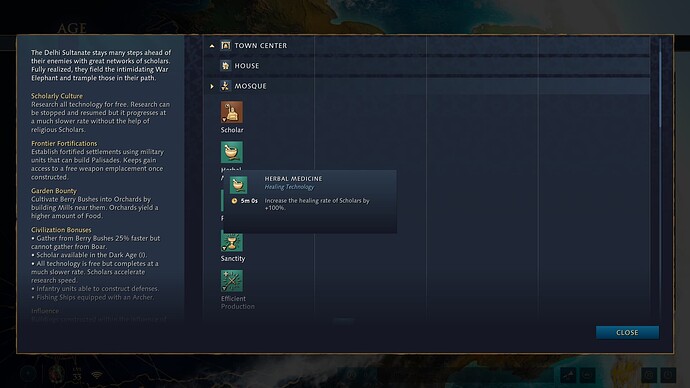 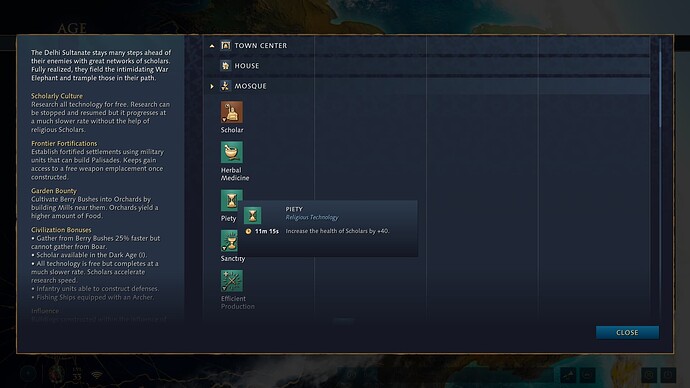 Compare this with other civs having 45s for piety upgrade, and 1 min for herbal medicine, this surely is not correct. Please fix as delhi is currently nerfed into the ground!

The changes in the most recent patch are correctly reflected in most of the research items.

However, techs that are available early for Delhi such as Piety (available in Imperial for other civilizations) has a research time modifier of 15x as opposed to the intended 3x. This means it currently has a base research time of 675 seconds instead of 135 seconds.

Additionally, the scholar system does not seem to have a consistent reduction value. Before this patch, 9 scholars brought the research time down from 5x to 1x. Now it takes 10 to reduce from 3x to 1x. I used Wheelbarrow as a reference both before and after the patch. When considering the 15x modifier, a 45 second research item takes 675 seconds. With 18 scholars, this time is still 2.33x longer at 105 seconds.

Please indicate the reduction via a tooltip and check the pattern to ensure it is working as intended. The reduction does not seem to currently follow any percentage reduction pattern, which is probably necessary given the now 15x increase in Imperial tech research time.

also dont rely on the tooltips, check the times with a stopwatch. there are many cases where the UI or the tooltip says something but actually its different in action

Plus, the Keep tech bug but you already know that.

The university increases the research timers with 20 scholar the keep research get over a hour long.

Sounds like Delhi got messed up this patch and are completely unplayable now, lel. Feels like we’re in initial closed beta.

No idea why anyone at Relic thought adjusting Delhi was necessary. They were never a strong civ even with the Sanctity strategy. The research was too slow and they don’t have any unique bonuses that give them any parity with the French, English, Mongols.

Previous Delhi was strong in ONLY two instances. After fast castle from the Sacred Site gold and right as Imperial is researched since all the tech is free. Delhi is weak to early ram rushes from English and HRE, weak in late castle to French knights, Abbasid & Mongol springalds, Rus and HRE relic gold, etc. And weak in late Imperial (especially with bugged Hisar) to French and Rus siege, English passive gold, etc.

Delhi balance changes should’ve been to make the civ more viable. If the team thought sacred site rushing was cheesy, make them more viable without it. Not make them unplayable.

Horned Blade is available at age 3 but takes x15 times.

Horned Blade is also falsely listed as an imp tech now in the tech tree. Probably the reason for the false research times. As a developer myself, I have really no idea how that is even possible. How can a tech be listed in the tech tree for imp, while being researchable in castle age and be counted for research times as imp again. Every upgrade should just have an “age” attribute which should be used for all three things. This feels like some quick and dirty hard coded stuff here. Ooof

It was mentioned on the latest stream they didn’t want every game featuring Delhi to be forced become a full army all-in for control of sacred sites in dark/feudal age with no other viable strats for either side. That said they really missed the mark on the power level of the civ.

yeah they didnt want delhi to only have one option i.e. sacred sites, so now delhi has no options of any viable strategies whatsoever. i have counted 20+ bugs in delhi which severly hamper its ability to be competetive or even at par with other civs. and 2 of those are major landmarks which are completly broken.

you got that right, this is open beta, its just you pay for it as well.

It wasn’t just that Delhi had only 1 option, but when playing vs Delhi the opponent also only had 1 option and the game basically came down to how long does Delhi hold sacred sites. Delhi does need many bugfixes and some buffs so that there are other strategies now.

It cannot be intentional to have research take over an hour with 30+ scholars. 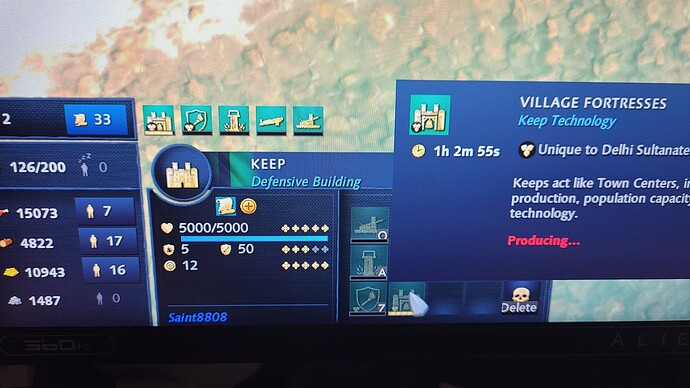 1 option for Delhi was too many option for Delhi… Lol I jest. I like that they want multiple vaiable strategies and aren’t afraid to work towards this. Delhi need a buff tho. Also, English need their first landmarks updated as there is only 1 pathway for english, 0 second op 2nd age longbowmen with no counter unless you’re french, production of course. With the changes to horsemen you can’t counter a longbowman mass. Simply can’t match the production rate especially since English don’t even need to make an archery range for it.