1 year of DE: What would you like to see changed/fixed?

So we have come quite far with the now 1 year anniversary of DE. Though, there are still things that can be better in this game. What would you like to see get fixed? Any wishes?

See also this thread: 1 Year of DE: What would you like to see changed/fixed? - ESOCommunity

Repost from: 1 Year of DE: What would you like to see changed/fixed? - Page 2 - ESOCommunity

The online experience still feels very empty and lonely. Honestly, ESO was much, much better (apart from its bugs).

My intention: If the game continues the trend of improving as it progresses, I hope that in the future it will be renewed and things will be implemented to the base content and its first expansions to live up to what the DLC ‘The African Royals’ offered us. I have thought about some things that have already been discussed and others that I would suggest, but it is better to collect them to represent common interests, so they do not become irrelevant forums over time. ¡Let’s start!: Africa…

Can we have the gunfire smoke fx of AoE4? I believe it will suit AoE3 perfectly.

Ohhh yes!! i 100% agree, in fact i´ve made several changes to germany and haven´t post them, don´t know when to do it honestly, but they are not too innovative, they´re just buff to age IV cards mainly and one or two changes more, but need the opinion of the community to see what changes would be welcomed and wich would be too op, so hope i´ll soon write it.

The awful “fur trade” mechanic needs to get fixed.

And reverting some of the worst of the name changes. Renaming “Medicine Man” to “Healer” and “Plantation” to “Estate” are objectively worse and far less clear. “Healer” should be the term for the class of units that includes Priests, Surgeons, and Medicine Men. Plantation is the term for an operation where cash crops are grown, while Estate alludes to the property of a rich master. Neither of those old terms were in any way offensive to begin with so it’s especially frustrating.

We already have it. But I think it can only be seen in high graphics settings.

New or heavily revised balance team. It’s clear from the launch of TAR, Mexico, and Sweden 1.0 that the new civs have always been busted in one way or another (mercifully, USA didn’t have this problem since most of their busted stuff was in lategame techs and in State Militia). I wouldn’t mind if they got some of the old EP 9.0 team together to help rein in some of the developers’ ambitions.

Mexico doesn’t need an omni eco building that trickles resources, can act as an HC shipment points, get a ranged attack, and garrison vills. Or hussars that can be upgraded to counter HI, or pikes that turn into muskets, or their 7 minute FI, or their 2.5k resource Industrial Age shipment, or their 800 resource discovery age shipment, etc. This is all stuff that could’ve been fairly easily caught.

But regardless, the fact that there is always one broken civ on the ladder that dominates FREELO until the devs stomp them into the ground, only to release another civ that does the same thing kills any desire I have to play online.

So I’d like for them to reprioritize their civ design and focus more on restraint. Not every new civ needs to be good at every strat. They shouldn’t be able to FF/FI/Turtle/Rush with minimal effort.

I actually think some are intended. If they do not know exactly what would make a civ broken, they would not implement 2000+ resource cards for a civ with no xp penalties like Germans (or even faster xp income). I can only think of this as an intentional design to make it op for the release and nerf it later.

Common practice in today’s game industry but not one that I like.

Either way, it’s not a good look for the team, and the constant P2W DLC kills all desire I have to play online. I’m sure I’m not the only one who stopped playing ranked mode because of this.

Are threads automatically translated into other languages?

Yes, click the globe icon under post to view translation (when original is not in your language).

I would like to see completely new theatres of war, maps set in Europe, so Historical European battles can be held as well as Maps set in the Middle East. As a citizen of South Africa, I want the Zulu civ to be added, which will allow you to fight as the British and Dutch , expanding ever northward from Cape Town all the way into Kenya, fighting and befriending the native peoples and encountering formidable foes such as the Zulu whom have strong, fast melee spear infantry called the Impi.

With added animals such as Lions, zebra and Elephants + hogs that attack villagers that shoot at them and don’t merely run away. Also add predatory animals that are not connected to treasures. For instance lions that roam the plains and attack lone ,unsuspecting settlers.

And in turn I too wish to fight in the deserts/mountains of the Middle East. Fighting as Napoleon in Egypt or as the Ottomans fighting against the Tuareg, Arabs and Afghans.

To exit a battle, you should have two options:

1.SAVE & Exit (For when you want to return to the battle at a later stage.)

2.Resign / Surrender (For when you have been defeated and you wish to give up the battle.)

In selecting Save and Quit, it forces you to create a save that you have to continue later.

When you Resign/Surrender, the battle is gone indefinitely, can’t be loaded and your Home city LOSES experience points, the more battles/XP you lose, the more card options you lose until you either start winning battles again or when your options become so limited form your Home City, you are forced or REVOLT.

I want a Revolution to have a more severe effect on your home city, if you launch a Revolution and you win, you sometimes have to fight a battle against the mother city whom will try to squash your rebellion. If you Revolt and you lose the battle, for the next three games you should be given a bad deck of cards as default since the Mother city won’t support your colony as punishment for your actions.

But should you win, during the revolt and repel the home cities army, you can have extra perks, such as choose a better explorer, gain access to powerful hidden cards and you can alter the appearance of your Home city dramatically.

If you Revolt to frequently and you lose a battle against a counter revolt, you should receive a declaration of banishment from your home city and then lose access to play as that home city, forcing you to start from scratch with a new Home city. (Shipment cards should be unlocked as your city progresses!! As it used to be in the base AoE3.)

Add more customizations to the Home cities, such as Soldiers marching through the streets, Highlanders/Musketeers for the British, Skirmishers for the French, Strelets for the Russians and so forth.

The more battles you lose , the less XP your Home City has, the more run down your city becomes, buildings should close, wooden shutters should appear on disrepaired buildings that has lost the most shipping cards, less citizens walking about and robbers, mobs, beggars and filth should spawn at random intervals.

Until you win battles to improve XP and reinstall better living conditions, or you are forced to revolt. If your revolution is successful, you gain a new city with a clean slate and special shipping cards. However if you lose a revolt, you, lose the city and you receive a notice letter from the Home City a declaration of banishment from your home city and then lose access to play as that home city, forcing you to start from scratch with a new Home city.

The Blockade system can be expanded upon, the enemy European , Asian and Ottoman AI should attempt to blockade you more frequently but once you are blocaded, you can assemble a strong navy to break the blockade, but to research that should be extremely expensive.

Civ’s to be added:

Please work on the European powers as well, I would like to see completely new theatres of war, maps set in Europe, so Historical European battles can be held such as the battle of Waterloo, Trafalgar , the campaigns of Gustavus Adolphus and so on.
Add more European factions such as: Polish-Lithuanian commonwealth and Austria-Hungary.

Give the French new shipments that provide them with African units + French units:
1.Ship x2 Napolion Guns from your French Home city.
2.Ship a regiment of Askari soldiers.

Some publicity would be nice. Imagine if they spent aoe4 marketing budget on aoe3de. Server pop would be atleast 10x 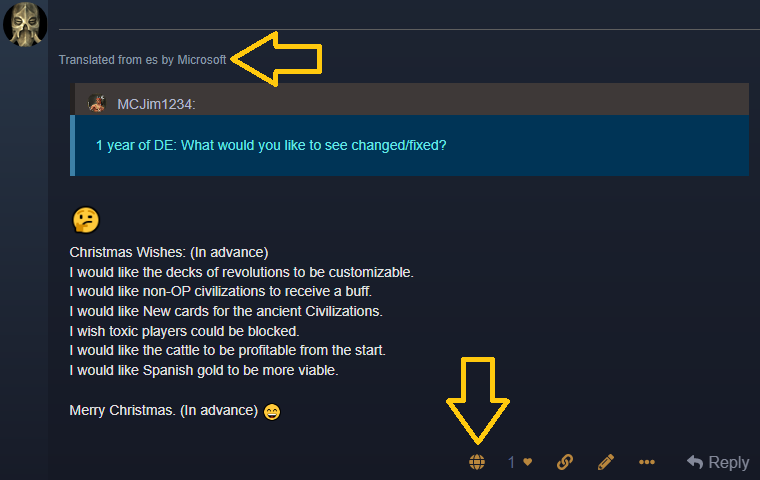 I wouldn’t mind if they got some of the old EP 9.0 team together to help rein in some of the developers’ ambitions.

Agreed, this would be the best fix to the balance issues plaguing the game.

RAM usage mainly
Then some crashes on skirmish