I searched the internet for some information about the Elo proportions in the Ladder for 1v1. I am currently at 1120 Rating. I was not sure if this is a good, or a bad rating. I was wondering if I am above average or below. For this reason I created a very small Tool in Java where you can select Elo ranges and it will show you the proportions. If you are Interested send me a message and i will send you the Tool. To execute it you will need Java on your computer, but I think everybody has. Dont blame me I am not very good programmer, but I am happy if this helps anybody lol.

If you click the Button in the Bottom the Tool sends the request to get the data from the AOE2DE API. This will take some time. On my computer to search in all the Data it takes up to 2 Minutes until i can see the Diagram. 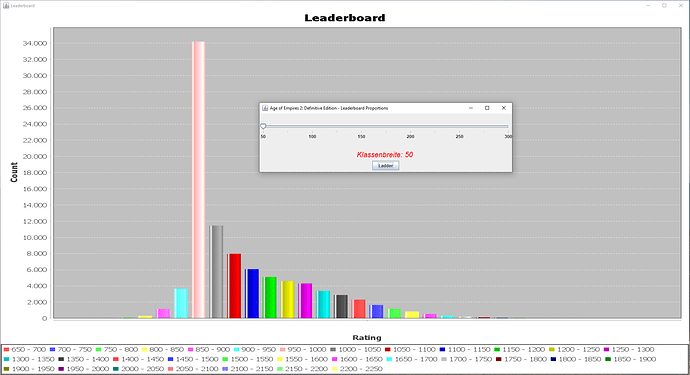 I will be open for some Advice or Input.
Have a good one.
UndueMicrobe128

Welcome here. I do find this an excellent idea and a very useful contribution.
They really should add stats like this.

Are you requesting data from AoE2.net or actual AoE2DE’s API? If it’s the latter, mind explaining how you managed to get access to it?

Hello, I got the data from the actual API. if you click on the API Menue there will be a good documentary of how to get access to it. Just build your link together and then you get the data. Unfortunately its only possible to query 1000 Players at once, so you have to query nearly 100 times to get all players.

What is that “API menu” you speak of?

You go to aoe2.net and go to API. There is the documentation. I hope this helps!

this is not actual api though. aoe2.net gets data from steam api

AoE2.net doesn’t get data from Steam API I’m pretty sure
DE isn’t even played on Steam servers, mind you

Not a bad thing!

Players in this range are most likely getting the shortest queue times and the most even matches.

More like, having one match vs a much stronger player, and the next against a total noob
I’m around 1100 and I have this every time I try to play ranked haha.

Watch your recorded games and if you’re anything like me, you’ll notice that in your losses the opponent isn’t necessary much stronger, they simply executed a superior strategy and you didn’t adapt properly.

Most of my losses aren’t related to the opponent having an insurmountable mechanical advantage, they simply made better choices.

I see players execute build orders or choose unit counters/positionning much better than me.
Or that they properly adapted to my strategy and out-smarted me.
Hence, I consider them as stronger. If they do it in a way that leaves me helpless, than I consider them much stronger than me.

I’m simply saying that at this rating, I tend to find big opponent skill gaps between games, and balanced games are rare.

Actually I think DE is indeed on Steam. if you launch the Game there is a Steam Icon in the SystemTray. 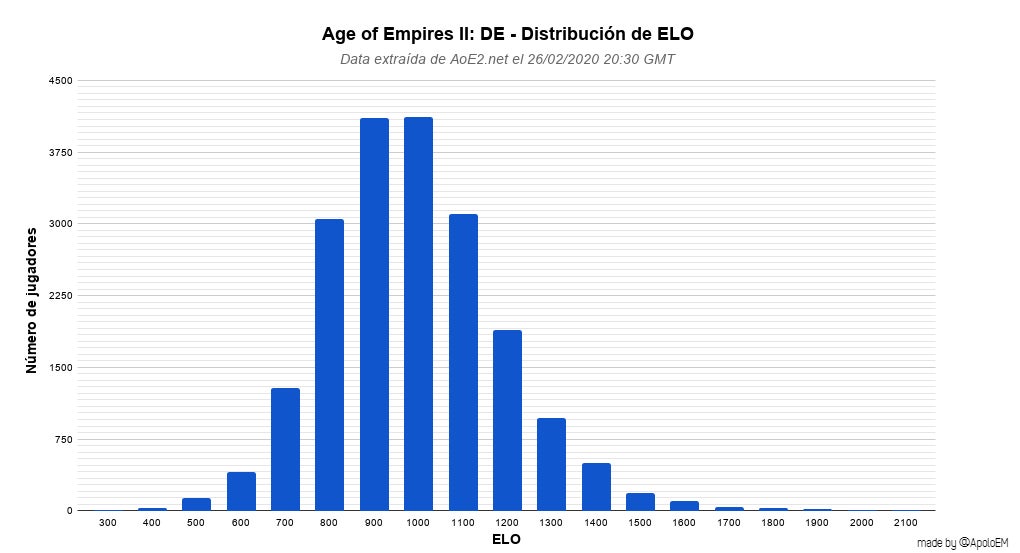 Just something I found, if you can’t understand the graph made by OP.

34 000 is a wee bit high dontya think? compare it to the official numbers…

yea this looks more accurate, thanks