A Conjecture about the Next New Civilization

What is the next new civilization we can get? Personally, I think it might be Persia.
The reason why I think so is that after the Ottoman remake, many models can be used in Persia, which will reduce the workload and make it easier to create this new civilization.
And I don’t think Ottoman will be remake for no reason. It is likely that this is the preparation for the new civilization in the Middle East.
Of course, these are just my personal views

there are 4 factions i could imagine they add, depending on a lot of different conjecture one can take.

2: Persia, large important empire, that did fight both the Mughals and the Ottomans, the crossroad between Asia and the west and one of the few places not colonized in the games period (all be it, it was forced to open its markets).

3: Denmark+Poland, some will argue its not that likely just after knights of the med, ill argue they are 2 fairly large countries that where important each in their own individual way, also most guesses are that KOTM sold well so with that in mind one could i imagine it might encourage some more similar DLC, but again who knows.

The new units the Ottomans got are very, very ottoman looking, so they aren’t really something that’d fit just because "they are vaguely Middle Eastern.

Brazilians
Personally I hope this is the last revolutionary civilization.

If you don’t want more revolutionary civs then don’t promote them by putting them at the top of your list. Personally, I’d like no revolutionary civs, but if they are to be added, Gran Colombia or Haiti would probably have the most potential for unique mechanics.

Mapuche would be the fourth, and possibly the last Native American civilization at this stage.
And if there’s a fifth, well, Muisca

You obviously don’t know much about Native American civilizations if Muisca is your finale. They’d be a good pick for a minor civ, but definitely not a full one. There also already are 4 native civs in the game.

Mapuche and Guarani would probably be the last possible Native American civilizations… in South America. If you look north there are a ton of options. Comanche, Cree, Haida, Maya, and Muscogee would all be excellent options.

I’d agree these are the strongest contenders for potential Asian civs, but this is just too eclectic for one DLC.

The issue with this is that the Kongolese aren’t really a pastoral people so they wouldn’t fit the livestock/influence system the rest of the Africans have going on. If you want a southern Africa expansion, I’d say Shona and Zulu would be the way to go since both would fit the existing system. Kongo would probably be better paired with another non-pastoral African nation such as Akan or Yoruba.

If you don’t want more revolutionary civs then don’t promote them by putting them at the top of your list.

The order of my list doesn’t mean anything.
Including Brazilians is just because I understand it has many fans, which means a pretty good market.

There also already are 4 native civs in the game.

This is my miscalculation. I will edit it.

Apparently the reason I pick Muisca is because its role is similar to the Aztecs and the Incas. And for Native Americans, I don’t care much about how long they existed to be enough to be a civ. But it’s best just introduce the Mapuche, so Native American civilizations are pretty enough.

just too eclectic for one DLC

Don’t you see that the two items above this item?
Putting Asian civilizations together just have more or less possibility like the other items.

The Kongolese are the best representation of Central Africa, so the African-themed DLC should definitely have them. They can have their own unique market buildings or other special mechanics to go along with the influence mechanic. It’s the devs’ job anyway.

I think the next civilization will probably be American, Brazil or Canada, I have a theory that over time they will add a nation formerly a colony of the main powers of the game, USA for brits, Mexico for spanish, Canada or Haiti for France, Brazil for Portugal, Indonesia or South Africa for Dutch, etc etc etc.
Always between big DLC (+2 civs and new game modes) comes a small DLC that adds an “ex colony” civilization, so if my theory is true, a single civ DLC is coming.

After that, most likely there will be a DLC from Asia, a lot of people are asking for it and the devs usually listen to us (with Ethiopia and Italy), so probably Persia is on the way with a “surprise” (as happened with Hausa and Malta).

And if all else fails, well, the next World Cup champion will have his own civilization as an extra prize xD (Can’t wait for my Argentina/Brazil DLC) 212121

Canada would probably be both a mix of british and french influence. The colonial civs seem to be the way aoe3 is splitting the civs to better represent the european motherland countries and the colonies proper.

I think the next civilization will probably be American, Brazil or Canada, I have a theory that over time they will add a nation formerly a colony of the main powers of the game, USA for brits, Mexico for spanish, Canada or Haiti for France, Brazil for Portugal, Indonesia or South Africa for Dutch, etc etc etc.

I can’t hope enough that you are wrong. This would be the absolute worst direction to take the game. Canada and Indonesia should never be added. They’d be much better covered by civs like Cree and Javanese. It’s also extra insulting that they have no problem splitting the Anglos and Hispanics into multiple civs that don’t fit the era the game is set in. While at the same time they have said it’s okay to have a Frankenstein German and Indian civ so splits like Prussia and Austria are “unnecessary”.

Nothing stopping them from adding Prussia. You literally don’t even need to “split” Germany since the prussians would play completely differently and the only change would be renaming the german skirmisher. In what way do these nations “not fit” with this timeline you clearly invented in your head. Aoe games always have civilizations that in reality were seperated from one another by thousands of years while this timeline of aoe3 is actually only separated by mere centuries to even decades. 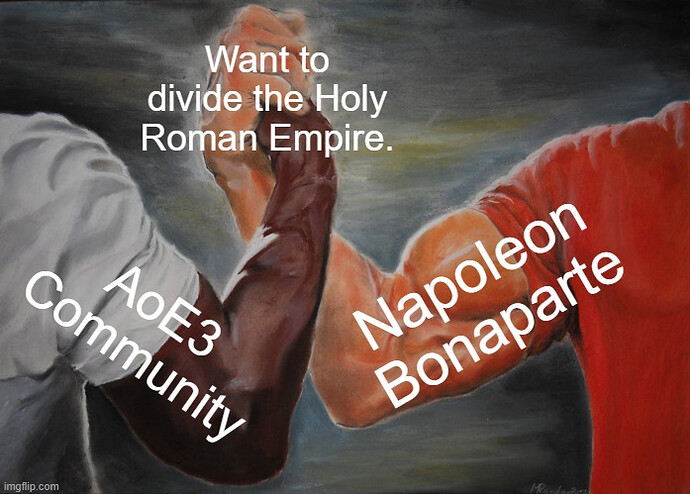 Oh? According to this picture, looks like I’m not part of the AoE3 community so far.

i think there is pretty much zero chance of them adding canada, the historical battle had nothing unique (unlike new orleans which had 2 unique units). also whenever vividly commented on it it felt more like a “why are you asking for this!?” than anything else, if the canadaian dev doesnt even see them as interesting then i dont think there is a chance they are added.

also just not independent in the period.

Persians (+ Omanis/Arabs)
Brings the missing Middle East into the game.

####### has more or less every single time it come up rejected the idea of a german split, its about the only concrete answer we have gotten about anything.

Siamese is the best contender for the next Asian Civ besides Persia. Koreans and Omanis are great contenders too.

Like i said you don’t need to split germany. Just add prussia since they will play differently than germany. Germany represents the holy roman empire(neither holy, nor roman, nor empire btw) during the italian and thirty years war while prussia would represent germany during the build up to the german empire proper.

Remember that the Ottomans are also a Middle Eastern civ

Yes. I stated that in that way just because the Ottoman civilization belongs to the Europeans by the definition of the game. I understand that Turkey is also located in the Middle East.

If that picture hadn’t claimed the own desire as the entire community, I might not come up to express the voice of another side.

since they will play differently than germany.

You can also separate the Scots from the British as they will also play differently too. Just saying.

How are they different other than one has line infantry that wear skirts. Not a good argument there kid.