A few thoughts regarding factory cards

First of all: there is no difference between “robber baron” and “industrial revolution”. The only difference is that they had different level requirements in legacy. This looks a bit uninteresting.
What about either (1) give them different purposes or (2) merge them into one card?
I think it makes more sense if robber baron is an American-specific card (either with or without unique traits) because that term is American: 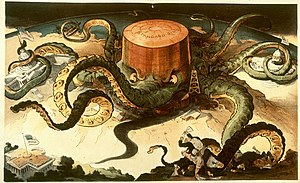 Robber baron is a derogatory term of social criticism originally applied to certain wealthy and powerful 19th-century American businessmen. The term appeared as early as the August 1870 issue of The Atlantic Monthly magazine. By the late 19th century, the term was typically applied to businessmen who purportedly used exploitative practices to amass their wealth. These practices included exerting control over natural resources, influencing high levels of government, paying subsistence wages, The t...

And also I have a more radical thought. Not sure if it is practical, so I’d like to know what people think:
The 2 factories card may be the only cards that you MUST put into the deck if your civ has them (maybe 2/3 vils also?). The thing is, this is not an intentional build or strategic decision, but because if you don’t do it, you’ll be at a serious disadvantage once the game reaches age 4. I don’t see anyone, even those going for rushes, not including them.

On the other hand, the inclusion of most cards is and should be the result of strategic thinking (military or economy, quantity of quality, rushing or fast age-up, and whether to prepare against certain possible strategies from the opponent). For most of the cards you might actively consider whether or not to include them. Factories do not. You do because you have to.

As a result it effectively leaves the European civs a 23-card slot to decide on. Not 25. Imagine if there was a card that unlocks dragoon-type units at age 3, and it is so important that everyone includes them. It does nothing but wastes a card slot. I think such a thing should be a default feature, not something you’ll need a card to unlock.

Of course factories are too powerful if they can be directly constructed by villagers. So here are some possible ways NOT to overthrow balancing:
(1) Like the US. Directly deposit the 2 factory cards into your deck once you reach age 4.
(2) Make them techs that costs shipment points. It has already been done in the NE mod. As for which building, maybe move the capitol to age 4 and add the “factory tech” to it:

Capitol is the only age 5-exclusive building that most games would never see (treaty not included) and serve only one purpose (other cive have those techs unlocked in regular buildings). The US state capitol is a good design, but we can keep their wagon-building and early build as a special feature. But “regular” capitols could be made more interesting following that direction: Available in age 4 Gives some additional civ-unique technologies (in both age 4 and 5; can be unlocked or made cheap…

BTW: I think quite a few cards that look as if they were originally techs in the earliest designs should now be reverted to techs. Now that the strategy of the game is very well established (unlike the earliest release), we are pretty sure that some cards will never be used. Moving them back to techs would give them some possible use.

i think blocking two cardslots is not a problem. I almost never send all of my cards and my biggest struggle in designing a deck is the limited space in age 2/age 3
(most other age 4 shipments are not that important for me)

keep in mind, that many non european/colonial civs need to send shipments to compensate not having 2 factories aswell… so these would also need to be turned into techs etc. to keep it fair

If you wanted to keep the Robber Barons card icon and idea maybe you could rename it “Tycoons” and have it increase gold gather rates at at the cost of lower rates for food and wood? Or increase factory output at the cost of lower villager gather speeds? Thematically you’re transitioning from a primary industries economy to manufacturing… of course it would synergise (too) well with revolutions then lol

Factories should just stay a card, just like others pointed out, other civs have other cards that are necessary in their decks, like shrine cards for Japanese.

A 2 factory card is a very simple no.

This seems like a proposed change just for the sake of changing it, in effect it barely changes gameplay if any at all and the idea that for some reason the EU civs are the only ones with necessary cards is untrue and if you didnt mean it like that, then idk what your point is with euros having 2 necessary factory slots as all civs have necessary cards.

Their origin is that some civs didnt get 2 in vanilla and because it was too unfair they gived them a 2nd one. Now devs create civs with just a single factory again🤨

About slots…aztecs, indians, inca, lakota are examples of civs that have to depend on an infinite card for a good economy while crates have to be worked by villagers too

If I remember correctly, in vanilla the Russians and Spanish had only one factory card, so in the Warchiefs Expansion the original devs added the card “Industrial Revolution” for them, perhaps to represent the somewhat later industrialization of those countries.

Regarding the Italians and Maltese who only have a factory card, I think the intention of the devs was to replace 1 factory with another card that has a similar effect, in the case of the Italians the card is Usury (Lombards now return 25% more coin for each invested other resource), in the case of the Maltese is Sicilian Supply (Villagers gather from Mills 25% faster; grants a trickle of 2.75 food), and there are some other unique cards that can also contribute in a similar way, such as Uffizi and Barrakka Gardens.

We can discuss how good these cards are as a replacement for 1 factory, but I understand the intention of the devs to diversify the options of these civs, to which I can add that perhaps it could be unbalanced that the Italians produce 2 Papal Bombards at the same time (Some think Papal Bombards are crap, but that’s another story), or for the Maltese to produce 2 heavy cannons that have more HP thanks to the special bonus from Malta.

The only " civ" that had a 2nd factory cart ( not even buildable ) were SPCAct3 since their ageup was a factory.

Think about China who need to send repelling volley while euro civs can do it in arsenal.

Aztecs and Inca need to send various support cards to upgrade units while euro civs can do them in arsenal.

There are many more examples. European civs with arsenal techs and factory upgrades are more efficient in deck space than non-european civs actually.

So still 2 cards for Inca’s? 2 factories is also two cards. Its also arguably better for the Inca’s seeing they can actually rebuild the Kancha, while a factory cant.

Euro civs still need to send the advanced arsenal, except Sweden. Also both Incas and Aztecs have priests/priestess and Incas also llamas which do not cost pop space, unless maybe priestess do? which can get military bonusses from the fire pit which the Euro civs cant.

The arsenal techs without advanced arsenal card are pretty useless or not that big of a deal.

2 factories is 2 cards. A card for wood production from a rebuildable and more numerous building can be argued, is better.

Japan has a wonder which has the better arsenal techs and even gives additional bonusses which the Euro civs dont have. Japanese have shrines which are basically small factories from age 1, which euro civs dont have, except Sweden. Also I think by the time your starting Orchards expire, you either have berry bushes and otherwise you should be building rice fields instead of sending a orchard.

There are many more examples. European civs with arsenal techs and factory upgrades are more efficient in deck space than non-european civs actually

Its all perspective, you cant say Euros have Arsenal for which they dont have to send a card (which I showed above is more nuanced as the more valuable upgrades are locked behind also a card) and ignore the fact that Incas and Aztecs can get military bonusses from their fire pits or Japanese having a wonder which is an arsenal + additional bonusses.

You cant say factories are more effective when they cost 2 card slots, while shrines also have first of all an technology and second of all, if I am not mistaken only need really 1-2 cards for their resource production, which in effect is still the same as euro civs.

What I said were just examples. Each civ still has more things that need to be sent by card while euro civs can do as upgrades.

Oh boy u really love arguing. You must be good at debating in real life too lol

And all the examples were bad ones? Its easy to say “oh these were just some” when you have a long list of items which are easily disproven, its better to start with strong arguments instead of poor ones. So what are these supposed other cards they have to also send?

advanced arsenal yes euro civ has to send it. but non euro civs dont even have those upgrades…they are xtra stuff. more example you look at aztec and inca support cards. they have many of them. each of them are some form of arsenal techs reworded. they have to send all those cards to reach max potential

but non euro civs dont even have those upgrades

Japanese get them through their wonder and arsenal they can send with the consulate. They need 0 cards, for these techs, yet I dont see you mentioning or complaining anywhere about that

Hausa can get the arsenal from allying the British, Wthiopians by allying the Portuguese, although they dont have the advanced techs. Although I assume they have cards which counteract this.

more example you look at aztec and inca support cards

These also send units, Euro civ cant both send a unit shipment and upgrade their units at the same time, so arguably the Aztec one and I assume its the same for Inca support cards, are better in terms of slot space.

It also doesnt matter they cost like 500 coin, because arsenal techs aint cheap either.

If you assume a base gather rate it might appear low, but its not realistic to say in age 4 when other factions have send 2 factories, the Hausa civ hasnt atleast send 1 gatherrate card. And assuming Euro civs have send any, Hausa would have too. Factories generally are also only viable in treaty or dragged out games, meaning economies are being optimizied/maxed out.

Again its all perspective. Euro needs more eco cards for their mills and plantations, which African and Asian civs do not need, atleast Africans I know for sure.

Perhaps the factory could be converted to a 2-use card and 2 cards would no longer be needed. The first time you use the card is free, and the second time it costs 500 of each resource.