Abbasid needs the TC meta to be competitive in 1 v 1. I suggest making a change to Fresh Food Stuff, a nerf and buff.

Nerf: reduce the discount from 50% down to 30%. 50% was always too strong for something available soo early.
Buff: Fresh food stuff now gives you a 15% discount on TC wood cost (60w cheaper); this will offset having to gather 50 extra stone since season 3 patch, but still require vils to be exposed on stone for the 350 stone.
Buff: Fresh food stuff now also gives 15% faster build speed for TC (from 150s to 130s). This will somewhat negate the extra build time added during season 3.

So what you’ll be left with is basically season 2 Abbasid with 30% fresh food stuff.

Moved to the corresponding forum section.

I would rather to see devs buffing other areas of the civ so they can have more options and not just rely only on the 2tc build.
The build is already very competitive, but its the only thing they have. It would probably be much better buffing the military wing for example in a way that it can compete with their economic wing.

the nerf to TC hurt Abbasid and Rus the most and abbasid more than Rus; and if you check the win rates at the Diamond+ you’ll see that.

However I DO agree I’d like if they made OTHER viable feudal openings using other wings on land! I’m into that trade for example. If Abbasid could pull off a Mongol/Mali like trade and have the unit roster with golden age??? I think that could be an extremely refreshing way to spice up the meta. 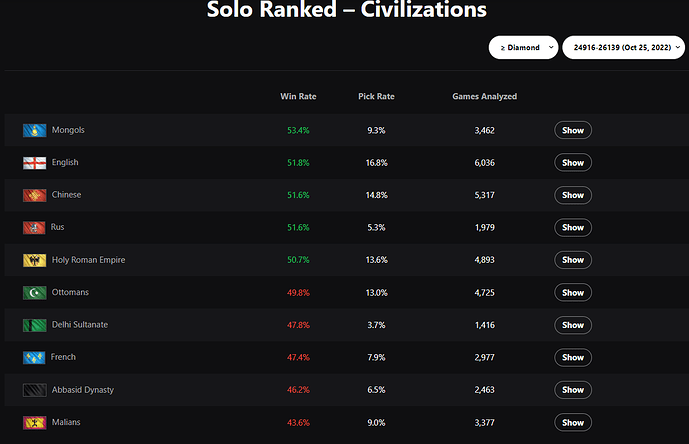 Problem with military wing is it has no place in any build order.

In feudal is better fresh foodstuffs because with the saved resources you can train more army.

In castle is better culture or trade wing, depending of the trade. In team games probably trade.

And in imperial, if you choosen trade is better culture, for save in imp upgrades.

For so, military wing is only viable in 1v1, with no trade. With the actual meta, favoring the trade, it just has no place.

Also, trade wing in feudal is good but not the best option, as Abbasid doesn’t need gold in feudal, saving food is much better.

How about adding more landmarks or buildings? They are the only civ where you only have to destroy 2 landmarks to win. To replace it, they could add more landmark every time you complete a wing, or some extra building, as the chinese:

I also had the idea for the culture wing to create “Field hospital”, but that idea had been already filled in the game with “Medical Center” technology, and right in the fortresses, which makes sense, since the abbasides had field hospitals. In fact, healing units in the fortress is one of the things I love the most when playing the Abbasid dynasty. About the boot camp, I really still can’t find info about the unique technology or if it is based on some specific event of the Abbasid Caliphate, if anyone has info I would appreciate it. If anyone has a better idea for the building of the military wing, I would appreciate it.

Idea for military wing. Instead of 15% hp make all infantry 15% cheaper. This wont be strong enough to displace 50% fresh food stuffs, but if they both nerfed fresh food like my OP says THEN update military wing with this suggestion this would make abbaisd extremely powerful earlier rather then later.

Military wing rework: in addition to the 15% for infantry, they receive +1/+1 armor. And cost of military buildings costs -50 less wood. Now you get better military and get them quicker.

Eco boom or early military should be viable. Also, I think Abbasid should start with 50 more wood.