I think everyone can agree the current Abbey is useless.

and thats it. A few notes:

I think this would ultimately still be a niche option compared to the Council Hall, but I think it would be significantly more viable than the current abbey, and might have some useful applications:

This would be my idea, feel free to poke holes in it. What other concepts do you guys think could provide an alternative to Council Hall?

Yeah at the moment you have to be an idiot to pick it over council hall so this would be a good buff.

Might be good too, I guess. Only issue is that it doesn’t synergize nearly as well with lb and m@a as it does with cav.

You could slap the healing onto their MAA.
Then again this has the possibility of making the english a little too good.

On a tangent, is the Abbey of Kings meant to represent Westminster Abbey? 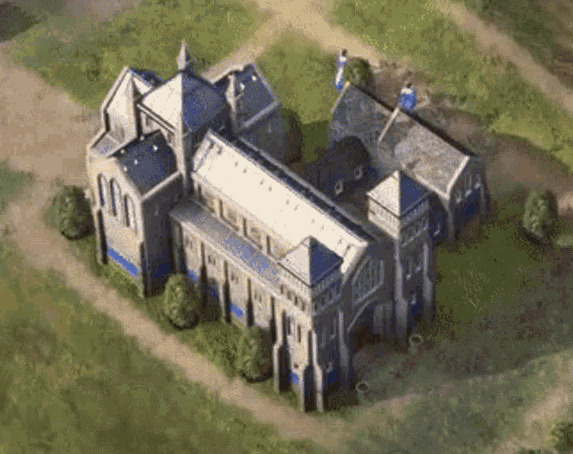 Probably yeah because that’s where kings were crowned for a long time. William the Conqueror and the current Queen.

On a tangent, is the Abbey of Kings meant to represent Westminster Abbey?

Presumably, but don’t be misled by the apparent bad likeness (which I assume is why you posted the two images). Westminster Abbey had a completely different building when William the Conqueror was crowned there. It would have been Romanesque rather than gothic, which seems to be mostly what they’ve gone for, although they still included some gothic elements including, confusingly, a perpendicular gothic window. (Also it’s facing the wrong way, the front should be facing west rather than south-east…)

I think expand the healing radius, and have it heal during combat. Then it becomes a defensive building, which could also be used offensively with a forward base.

It’s useful on water maps to heal your ships.

I have not thought of healing ships, but I may test that out in the future. Is the heal rate from the Abbey of Kings + heal rate from docks stack enough to make it worth it?

These are good ideas but without an econ building of some kind, it just doesn’t matter

English is a rush or go home faction, not just because council, but because the rest of their bonuses are bad

I think that this landmark intended for anti raid with no or low military, by build close to main town center and heal villager close to it after repel raid with mainly garrisoned town center or outpost.

Problem is this trick only useful against AI that send raid in wave and into range of town center and outpost as players would let raid units just out of range of defense but will try to snipe villager 1 by 1 continuously.

It really need reworked to more suited to deal with player.

literally all they need to do is make it heal during combat and it could be a top tier anti raiding option, as long as the healing rate isn’t too crazy it shouldn’t be overpowered, especially as you are trading off the ability to rapidly mass longbows at the start of feudal