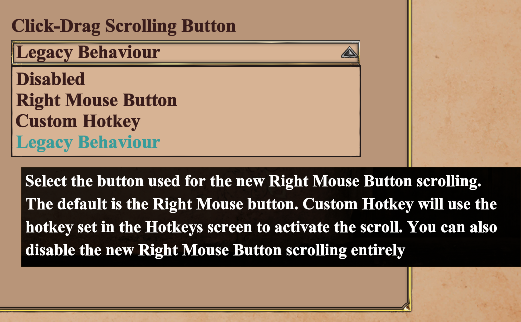 For those who want their right mouse button to control the camera (scroll up/down/left/right), in DE there is a new option, the “Right Mouse Button”, which does scroll the camera while holding it, but sadly, I believe it’s very clunky and unresponsive. So I can’t like it.

From the other hand, we have the “Legacy Behaviour”, that does the same thing, scrolls the camera and it’s super responsive (!), but only while you have zero units or buildings selected! Otherwise it does nothing! I don’t know why early developers made it like this, but that’s it.

I feel very sad about that I can’t exploit the great responsiveness of the “Legacy Behaviour” camera scroll, also while we have units/buildings selected, consequently most of the time.

Do you think that we should ask developers to make and edit on it, if they can, to the direction I point? Or at least vastly improve the new “Right Mouse Button” responsiveness.

Yes, it’s unfortunate that legacy right click drag doesn’t work when something is selected. Thats why I don’t use it while playing, only while watching recs.

The current default behavior doesn’t fit in the rts playstyle, it’s slower and less responsive. Legacy should be made default again.

Hey developers, this is a HUGE quality of life fix that would probably be extremely easy to patch.

Also, having a legacy scrolling speed slider would be excellent as the default is a bit sensitive.