About the new Team ELO calculation

I realise the need to change the team ELO calculation, but I lost 300 ELO in an instant, because of the new Team Elo calculation. Pretty unfair if you consider that, ever since I found a solid group of people to play with, I got teamed up against players with 200-300 ELO higher than me, but managed to reach up to a 51% win rate. And still, I was barely at 1350, while others with 41% win rate were close to 1500. Though some of my team mates lost more, but still this was not the right choice
Why reduce the ELO instantly, while you can start reducing the amount of which you gain after you beat opponents with lower ELO?
For example, if a player with 2000 ELO and a player with 1000 ELO beat a team whose players are 1500 ELO each, the 2000 player will receive much less ELO than the 1000 one. Why the need to reduce the ELO, before any matches?

Because they need an elo reset to remedy the elo inflation over time. Bear in mind, the same thing happened to everyone else, so you should still fight similar opponents.

I know, I read it in the announcement here: Updates to Ranked Team Game Elo Calculation - Age of Empires. I just think that not all players should have their ELOs reduced.
Anyway, sounds like a new start.

I lost 300 points with losing. I have +10 lose streak or something like that. My teammates surrundering for no reason. I cant carry them.

I honestly don’t understand why you don’t play 1v1s, or play with a prebuilt team. You complain about random team-mates dropping. You complain about unbalanced TG nomad. Both of these would be fixed by playing 1v1s, and you could at least enjoy TGs a bit more if you played with a team. Also, the 300 points thing is a part of a TG ladder reset, it happened to everyone.

Why you are come to my comments in every topic and talk about it ? My comments does not interest you.

You can treat this as normalization. Adjust/scale TG distribution and make it fit 1v1 distribution, shift median back to 1000, etc. Your rank is not effected. If your elo was higher than Player X, it’s still higher after normalization. 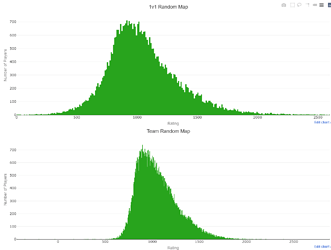 Do you have a solod group of people with whom you play? If you don’t, you 'll eventually end up with weirdos. I remember once our 4-player tram lost from 1 player who kept fighting. My team mates, either did nothing, either tried to attack his base with 20 troops, or just sent me wood, while I was struggling to keep myself alive.

How can 1v1 fix balance issues in Team Games?

No. He is chasing my comments and trying to answer me for no reason. He must be chiled osomething. I told him plenty times to go but he countinue to answer.

And many more other stories.Before this new elo calculation i had good matches but today is nearly all games are problematic.

How can 1v1 fix balance issues in Team Games?

There was a lot wrong with the TG rating. So instead of just resetting the full ladder, they just rescaled the ladder so it has the same distribution as the 1v1 ladder. Things like the same highest rating, same average rating, …
This way people still get their rating. A high rated player will still be a high rated player. You are still at the same spot at the TG ladder. The devs seems to prefer this over fully resetting the ladder, which was their other option.

At the same time they changed the TG elo calculation. You can read about the changes at the following post: Updates to Ranked Team Game Elo Calculation - Age of Empires
But the devs again messed it up, so the new calculation will still be terrible and is still no real fix.

So my TG ELO got a lot lower, because I don’t play that much 1v1s?

No, your 1v1 rating doesnt matter at all for the changes the devs made.

The TG ladder was bug / exploited / whatever you called it. The mean started at 1000 elo, but went up to about 1500 because of all kind of issues.
Also the highest rated players become 5000+. This isnt really normal for elo. On the 1v1 ladder, the max is about 2.6k. Which makes much more sense for an elo system. Look for example at chess ratings, which also uses a kind of elo system. Having 5000+ ratings because of an exploit didnt make sense at all.

As result the TG ratings are rescaled, so it fits the expected curve of an elo distribution

Lol. Sometimes reality just doesn’t fit expectations.
Should we revise our expectations or change reality then?

Lol. Sometimes reality just doesn’t fit expectations.
Should we revise our expectations or change reality then?

What i posted was the goal of the devs. But it looks like the devs dont really understand how and why elo works and how to adjust things around an elo system at all. So the messed it up. Like they did with the new calculations as well.

As result they failed to reach their goal of the changes and they really needs back to the drawing board.

People complaining about losing 200-400 points, meanwhile me losing 900 points and being happy with that.

We still need TG elo reset. As it was proposed by multiple players since months ago. A lot of problems would have been avoided if the reset was implemented together with the last elo calculation change months ago.