Accessibility Issue: No Pause and Queue Command functionality in singleplayer

You can not currently pause and queue commands in singleplayer like in AOE II.

I don’t know whether this is an oversight or it just hasn’t been enabled.

While a large amount of the community does not need/want this, it is a big accessibility issue for many players.

If this feature wasn’t in other AOE games I wouldn’t have expected it but given the series previous titles having this feature, it seems that this is an oversight.

There is queue commands but unfortunately there is no indicator on the map of the current queue for a unit so you have to just trust you have clicked correctly.

I was talking more like, pausing the game, queuing up commands for units, then unpausing.

Hey there. You’re right that there’s not an option for pausing to queue commands in-game. We’ll share your feedback and desire for this with our team for consideration.

I just submitted a refund request on Steam because of this. No clue why this would not be included in single player, after all it doesn’t negatively affect anyone but makes the game more enjoyable for who are learning or prefer a more relaxed experience. I’ll consider repurchasing if these features are added in a patch.

In AOE2 you couldn’t do commands while the game was paused? Are you misremembering maybe?

That’s from Total War series, not age, not needed, it’s an RTS.

You can actually, for all AoE past titles. Only in MP you cant queue commands.

Wow! Never knew this. Just tested pause with F3 on AOE2DE instead of escape and you can issue commands while paused that will be carried out after unpause. Interesting! Yeah no issue with it existing for singleplayer but maybe turn off in higher difficulty campaigns.

From what I’ve read, it was in a very recent pre-release version of this game. What happened?

Is it possible to slow down/speed up the game with a hotkey to workaround this? 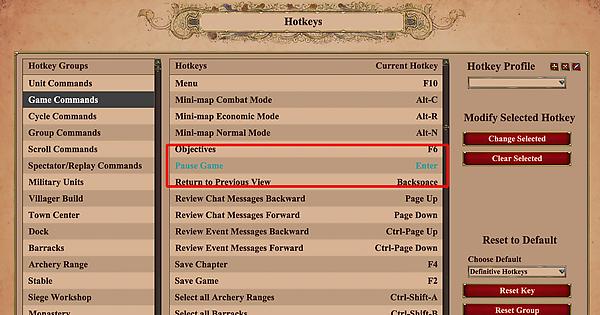 Please add this. For some the game is unplayable without it.

we’re discussing an active pause which allows you to view the battlefield and issue commands that will be executed upon game resume. the same as in previous AoE and AoM titles

Yeah and I think that is what he is showing you (in AOE2 DE).

Yep found out myself right after posting that.