Achievement not triggering: Beat an AI opponent on "Hard" difficulty

Just did all my AI 1v1 difficulty achievements in a row just now. So can’t confirm this bug.

I confirm to have this issue with moderate and hard difficulty. Hardest and Extreme I have not played yet.

@FootedElk911551 WTF is the point of your post? basically this : “my walls block enemy movement so therefore there isnt a wall bug” (in case this goes completely over your head, there is a bug that sometimes allows units to cross walls and jump cliffs)

The achievement mentions that it has to be 1v1 just so you know.

I do try to reproduce bugs mentioned in the Report a Bug section so that I can better explain how it can happen or check the editor/files for explanations. There is nothing wrong with mentioning that I can’t reproduce a certain bug.

As soon as I have time I will try it again and will report about it;)

I have just received moderate achievement with the following setup: 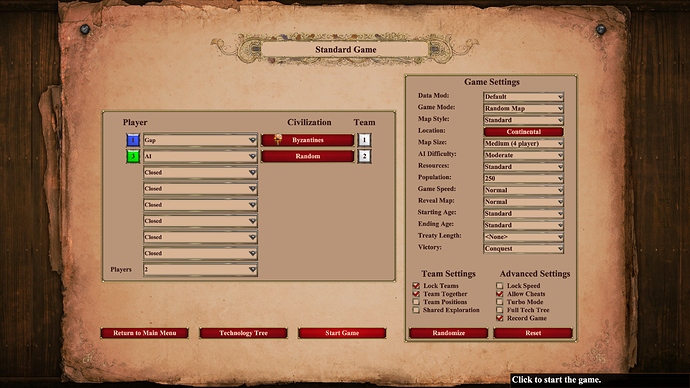 @iIiAGSPiIi thanks will give it a go

@iIiAGSPiIi thanks its resolved! i mirrored your settings and i needed to changet the victory from standard to conquest. that allowed the achievement to trigger. ill see if this helps with the regicide issue as well.

i needed to changet the victory from standard to conquest. that allowed the achievement to trigger

This is certainly a bug and needs to be fixed. Or else mention in achievement description, that victory condition must be conquest.

Good to hear that

Other achievements are still somehow bugged… I am going to write another topic on that.

beat hard ai in a 1v1 multiple times and the achievement is not showing. The moderate one worked and im getting civ win achievements but not the “Rough Ride” achievement.

I had 99 relics gathered (so I was on the verge of unlocking the relic achievement), I had never won with Chinese, and never won a 1v1 against a Moderate AI.

I unlocked the Chinese Victory achievement, but not the relic one, nor the Moderate difficulty one.

After reading this thread I think I’ve found a new “feature” of the mentioned bug. It seems that despite going to a higher difficulty, the AI’s behavior doesn’t feel harder. In my case, I beat the Hardest AI twice and didn’t get the achievement, which hasn’t been the case so far. Interestingly, the game felt very smooth, contrary to what I was expecting from the Hardest AI.
My game build is the current one, post Mongol celebration - 101.101.39515.0 5328560.

I’m having the same issue. Achievements not unlocking for wins on Hardest and Extreme. But they do unlock for the civ wins.

Happening to me as well.

I just won a 1v1 game versus Hard AI. No achievement. Then I realized “Allow cheats” was enabled. Facepalm 11