Noticed the same issue. They pop when the conditions are met, but progress isn’t displayed.

All achievements that require you to do a certain number of things, build x buildings, destroy x castles etc do not show progression of the achievements as did AOE 2 HD.

Issue: Achievements requiring x amount of y, i.e. Wololo, Kaboom, or Castle Crusher do not update with time. They do complete and you do receive the achievement once you’ve reached the amount set.
I have converted somewhere around 500 units today, counter for Wololo stays at zero. I also was not updated for Kaboom until I had completed it:

Every achievement with a counter has the same updating problem. It is minor, but it is a bug.

I’m trying to make the Achievement of taking 100 Relics but i see that none of my achievements who has a bar to complete is not working or updating like below:

The Tracking of the achievements is not working.
I played with several teams and besides the system counting that I already won the achievement do not move up and count as done. 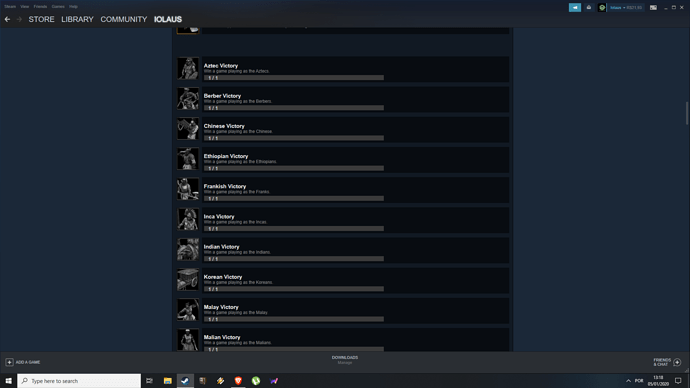 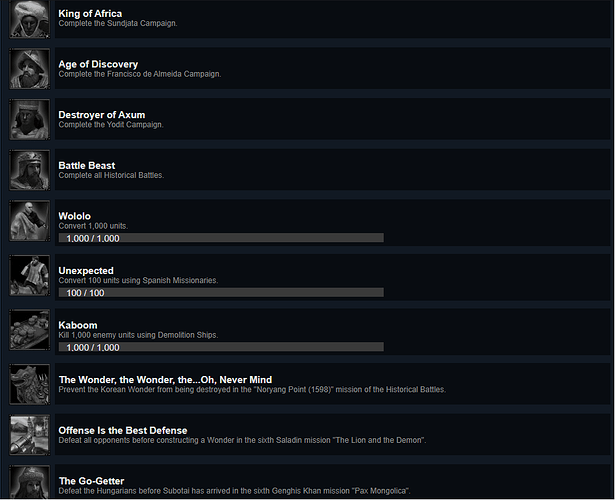 Issue: <!-- In playing several games in “Age of Empires 2-Definitive Edition {AoE2-DE}”, I have noticed that ALL of the “cumulative” Steam Achievements { i.e., those that call for accomplishing some activity over multiple game play-throughs } are listed with the counts shown as completed.

And as my Monks convert enemy units over numerous games, that “cumulative” count never changes to show any progress !! Previous Age of Empires games properly have shown such progress.

How can I correct this so my Achievement efforts are no longer wasted ?

Same apply for AoE: DE, the 21st Century achievement did not count the centurions trained.
Will check the AoE:DE forums and post there too.

Please check out a workaround to these issues I posted in a different thread and let me know if it helped: Achievement not triggering: Beat an AI opponent on "Hard" difficulty