Afghans as a potential civ after DotD?

As we all know, our beloved AoE2 is getting another Eurocentric expansion.
I’m not going to argue and assert why imo its a bad thing, but i was wondering about the future.

Afghans (other names can be used) once had a sizeable empire, which they gained using similar tactics to the Mongols (hence why the Dehli Sultanate, a remnant of the empire was able to deter the Mongols). Eventually after the empire’s fall, they adopted gunpowder and used it.

The Afghans have all the qualifications to be a civ, so if there is ever a less Eurocentric expansion, why not make one for them? Or at least rename the current Indians to Afghans if that doesn’t spark controversy (most people agree the current Indians is a representation of the Dehli Sultanate)

So if they ever do get considered, here’s what i think they could be like:

Bonuses:
Every villager gives you a small amount of gold upon creation or gold mines last longer
Camels get bonus damage vs infantry or Camels have bonus damage resistance
Elite Skirm and Heavy cav archer is free
husbandry and bloodlines are free or are researched instantly

UTs:
Castle age: Camels are faster or deal trample damage or every TC you destroy you get 5 Cav archers
Imperial age: Camels become trash units or BBC has more attack or is faster

UU(s):
Possible Castle UUs:
Pashtun or Ghurid Raider: nimble cavalry archer which turns into a melee cavalry when it dies. Would be more of a novelty raiding unit. Hard to counter when you have good micro.
Camel raider: nimble camel that could be a trash unit, would take on the role of the light cavalry line and there would be no hussar. Would allow you to spam camels for days just like with the hussar, comes with its own upsides and downsides
Pashtun or Ghurid Camel/Rider: A slower but tank like camel, would be ~midway between the normal camel line and a battle elephant in stats. Might deal trample damage. This would add a more powerful punch to your army that would help you deal with trickier units or buildings

Possible Secondary UUs:
Elite BBC: upgrade to the BBC, but an unlikely concept
Camel Drawn BBC: it’s in the name, would probably be unlocked by the imperial UT. This would essentially provide siege that can catch up with the rest of the army, allowing the player to quickly rampage through towns
Zarambuk: out of the time frame but still a possibility. Would be a Camel mounted gunner which needs the camel to sit before it can start shooting, but can shoot with good range or attack. Its role would clash with the cav archer, so it makes the player decide whether they are raiding, and need a mobile unit, or a having a full on war, needing a tanky unit

The civ’s weakness: Halberdiers, however they can be countered by the skirms
The civ’s strategy: If going for an early rush, (which is probably the best strategy), scouts are an obvious choice, but they do lack good archers, so if you’re waiting for castle age, camels and cav archers with some UUs in the mix should deliver good results. Add in some skirms once you know the enemy is making an army, since they’re about the only anti-anti-cavalry unit the civ has.
Good Teammates: Any archer civ would be a perfect synergy with this civ
Good Counter Civs: Any civ that can produce enough halberdiers to neutralize the whole army (like goths) would be great against the Afghans, unless the Afghans play to their full potential

So you get Bodkin Arrow in Feudal Age? Bracer and Heavy Cavalry Archer with +2 attack in Castle Age? It is the most broken civilization ever.

How does this sound?

This sounds really really strong. They better be lacking both castle and imp armor upgrades or something, otherwise this is going to result in ridiculous kill all unit.

What about +1 for all ages? I think that could be more balanced

Oh, hey! I have also a Central Asian Civ concept I wrote some time ago (but haven’t published it before now).
It’s funny that a couple of things are similiar to your ideas.
-Units spawning out of TC (though in Castle Age instead of Imperial Age)
-Free Heavy Camel upgrade and more defense (I balance this out by removing Knights completely and no Pikemen upgrade, the Idea being using Camels and Steppe lancers in conjunction instead of knights)
-Gunpowder Camel UU (But mines a primary instead of a secondary) 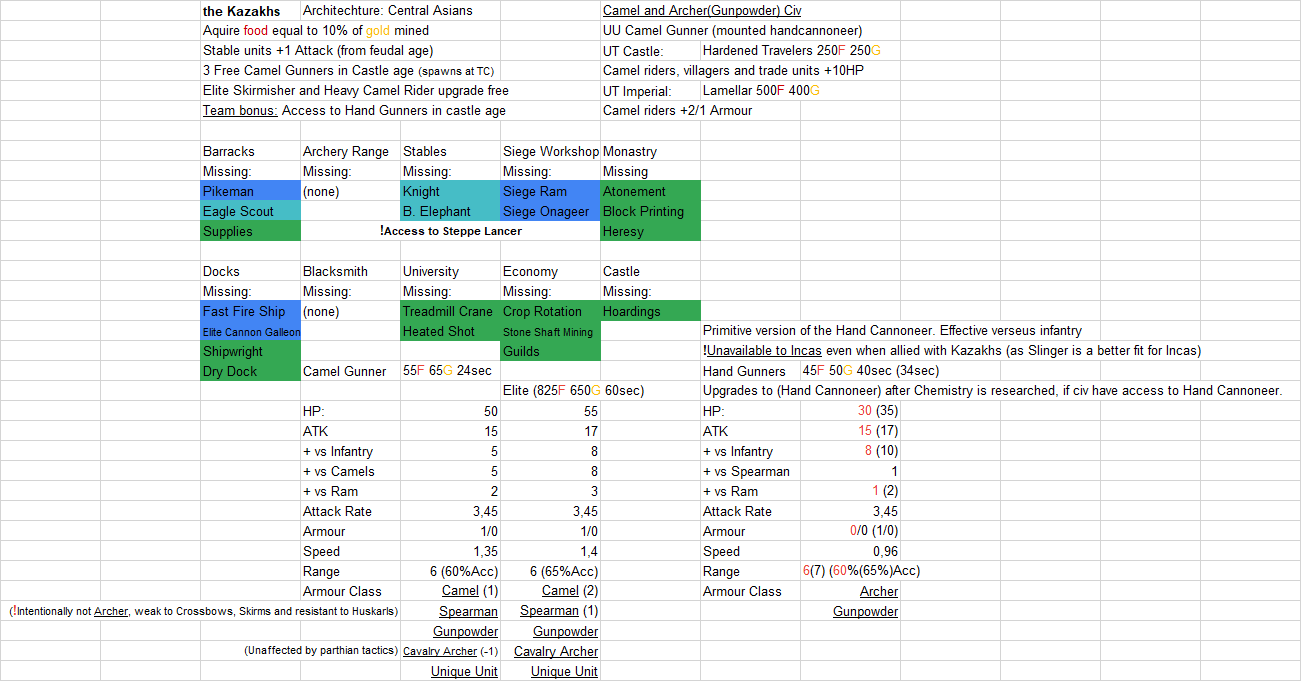 It’s difficult to give criticism your idea since you aren’t stating exact bonuses. When making a civ it’s important to see the civ as a whole, as you need to see the tradeoffs.
For example: vikings have an amazing eco bonus but lacks important cav upgrades.

You could get it down like: Crossbows are missing since you get free Bloodlines and to offset an unstoppable scout rush you get the Camel Raider instead of Scout cavalry balanced to it accordingly (like being very weak to archers or less effective against villagers). With what I understand from your concept, your civ could lack Pikemen due to readily access to camels (camels being cheaper/stronger, camel raider trash unit or Gold lasts longer) that’s exactly what my idea does. It can also help to think out how your civ plays practically:
-What meta strategies can it pull off and how effectively?
-What new strategies can it introduce?
-How do you counter the civilization when it’s played most effectively?
Answer these questions to yourself and write it down on paper or in Excel(or similar) revise it when you find problems and the solution to them so you can give a full demonstration of your idea.

You did probably more historical research on your civ than I did (as I focus more on the gameplay). Your description makes me wonder why I didn’t call my concept the Afghans.

I definitely would also like to see an additional SL civ (or other regional units) and I agree that Afghans definitely would be a good contender.
I had an idea of an expansion that contained a regional unit each and fills out all architectural missing buildings. Bengals: Battle elephants with Indian(South Asian) Keeps and Bombard Towers. Kazakhs(But Afghans might be a better contender): Steppe Lancer with Central Asian Keeps .Tlaxcala’s: Eagle Warriors with Mesoamerican Stables and Bombard Towers. (Only missing African Bombard Tower but figured they could give them to Ethiopians or Malians)

Thanks, i took alot of the “maybe” stuff out, (also borrowed some of your ideas).
Thanks for the feedback

Gunpowder Camel UU (But mines a primary instead of a secondary)

the only reason i didn’t want to make mine primary was because i had a weird feeling it would overshadow the conquistador, and also i wanted to follow the timeline a bit better than a civ like the Portuguese (having access to organ guns before researching chemistry)