Sorry to spam (reddit, discord, wikia and now forums), but I put some effort here.

But there you go, African Royals civs: 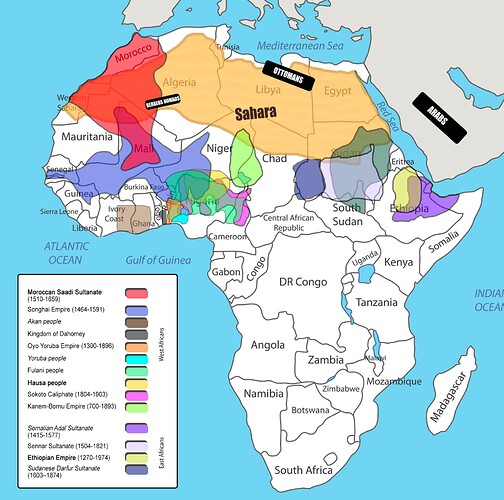 Hey! Because I wanted to learn so bad about African history, here is my not-very-accurate African maps with all major, minor civs and the empires/tribes/cultures where the new African mercenaries and some units come, with also the alliances. Sorry for the inaccuracies, but keep in mind that Empires borders change through the time (some empires here are represented at the height) while it’s very difficult to drawn borders on cultures. All info is taken from internet, so I don’t expect to be super accurate.

In bold, you have the playable major civs (including the Moroccans featured in historical scenario), in italics the minor civs.

Sokoto Caliphate it’s somewhat the empire that absorbed the Hausa city states and the state that it’s formed in the Hausa historical scenario. I didn’t put the Amazighs (Berbers) in a area because they have a big span across the North of Africa, and I didn’t put other major powers to have a clearer map (Ottomans, Europeans, etc…). Sahara it’s highlighted also.

Edit: The dark green from Sudan wasn’t mean to be there, they are the Madhist Sudan (too late for the timeframe)