I was and AO2 players, starwars version to, and curently a SC2 players.

When I play, the feudal age is like the more enjoyable part of the game ( exept when tower rush ). Skirmish and little agression with little pocket army, lot of tactic with unit placement, etc.

The castle age is still interesting. you have to pick up relic, your ennemy can be walling himself but with the civilian count it’s hard to build a single trebuchet but it is quite effective since there’s not keep and wall everywhere. As a french this part is quit umbalanced since you don’t have any monk, if you play agains’t HRE he have already a ■■■■ ton of it and will spread it throw the map. He will pick up all of them before you have finish to build your monastery and your monk. (You can use counter tactic but relic stuff it’s not the point of this thread)

But the late game is… like you have to build wall, wall, and more wall, and tower and keep everywhere for taking all the map for yourself. And you have to build a shitcrap of siege. It’s just stupid. It’s like the best strategy if you end up late game is to not engage your opponent directly and just wall for map control, it’s just wrong.
Ther’s no epic fight, no massive calavry fighting vs huge amount of maa and pick and crossbow, nothing like that. You have to build siege, a few unit pick and crossbow/archer to protect it and that’s it. It’s not freaking fun. Not at all. We were 7 friends buying this game when it was lauched, we were all playing SC2. I am the only still trying something on this game. The other have all left and stay on SC2 were epic engagement are still ther’s despite SC2 beeing quite old.

Last game, when my ennemy reach the castle age I raid it like mad and kill a ■■■■ ton of villager, but as a good amount of tower have been build i have to flee without finishing the job, building on site rame was impossible because of reinforcement. When I come back we where on imperial ( I go full cap army and the ennemy go fast imperial so I do it without mind that mutch ), there was a big wall. I knew it, So I build 3 Treb. I was like 60 Knight and 40Archer, 3 Treb and one canon, everything fully upgraded. Sound like the good amount of anything to slowy kill a gate, guess what, the ennemy was on 5/6 culverin. What I am supposed to do now ? nothing, even with 5 springald, I was dead. He’s only job was to take the treb no matters the cost and retreat.
He send his army throw the gate, I kill 40% when he retreat and I ended loosing some unit replace by immediate reinforcement. I was just unable to rebuild any siege since I was pop cap. I try to shop throw but it was impossible because he was sending crossbow/archer on the wall. I was just facing a ■■■■■■■ wall with no solution, despite my army being better than my ennemy. It’s just stupid, why can’t we just attack a ■■■■■■■ wall that cost only 20 stone with 100 unit. WHY? Why can’t we just kill a gate that cost a few stone with 100 unit WHY it’s the reason behind that. Forcing us to play with siege I suppose ?

Guess what, I come back to home, delete some villager and try to go back with some siege. This time i build 3 canon hoping If I can strike harder the gate it will broke. The time thoose few unit were build, I was walled by my oppenent… They were ■■■■■■■ tower everwhere and mutiple keep and the game was just lost and the 6 culverin where on my doors

I have seen to many streamed game where someone build a wonder and winning despite facing double size army. With for example a certain beasty Q building only scout to snipe threat from siege. It’s not a features, it’s stupid game play.

For me the problem is this one :

PS : I understand than the game develloper have made impossible to attack stone wall since it would make any siege useless, i don’t like this features because with the current meta wall and keep are making the game just stupid.

Keep and wall are to strong and to weak at the same time. They are to strong because a keep is really to ez to place, to fast to build, same for the stone wall. But they they broke up to fast when someone come with a canon/few treb. I think they sould be way longueur to build, like double the time, but having double/triple the health, and be impossible to heal when facing ennemy fire.

As building wall and tower are way slower, it’s denied every tower rushing. Walling and towering everywhere for map control ended up being impossible. Building a keep and a stone wall should be a real achievement that take a lot time and should planned in advance, as it should be real achievement to finaly take down a keep. A few siege unit should be enought to cleary guarented than you can break the wall/keep despite the number of worker healing it.

When someone finaly planne to build a wall it will considere the time it take and will only build the stricly neccessary amount, arount his own base and only if he have enought army to protect the worker building it. It’s just so stupid the amount of people playing this game with no army investissement and just walling up for fast imperial. Where the point of the game. Turtle and then boom get out when your are ready.

I know that it will not be listen but it is somewhat the best I can before leaving and go back to SC2, facing again the stupid no micro sky protoss ( but that’s another problem ).

I agree that late game can feel very tedious and is the part I’m the least good at. A tip I got was if you can maybe go for a sacred victory and force them out of their walls. It worked for me in a game today I was somehow able to control all 3 sacred sites for 10 minutes and win even though my opponent was still walling in.

“I play a civ that is good in feudal and bad in imperial so i don’t enjoy lategame”. Here summarized!

The only thing that needs to be changed is when a wall breaks it should break nearby chunks as well. Just like gates. Late game is much more enjoyable as you have a very diverse units and opens a lot of options. Try playing civs that are better late-game as well.

i think Aoe4 stone walls are dumb too. You should be able to attack them with melee units.

Seriously, you have more unit in the late game… like “canon and anti-canon” , the elephant ? So basic siege ? You have the handcannon/grenadier, ? Such a enormous amount of unit…

if I show you than from all this guys, none is still playing the game, what do you think ?

Why they all leave, let’s me explain :
They all say " It’s boring, nothing happens, they’re just all waiting with wall everywere, That’s force us to all go fast imp, full cap, basically we wait 30 min then we can start to fight"

But continue with what you say, You know what ? It’s because the game devellopers listen to player like you than they all leave.

From 16K player to 6K player in a less than a years, sound like it’s because the game is great and everyone have great enjoyement and deep need to play late game civ and 35 min turtle.

Yeah this is this intense late game : 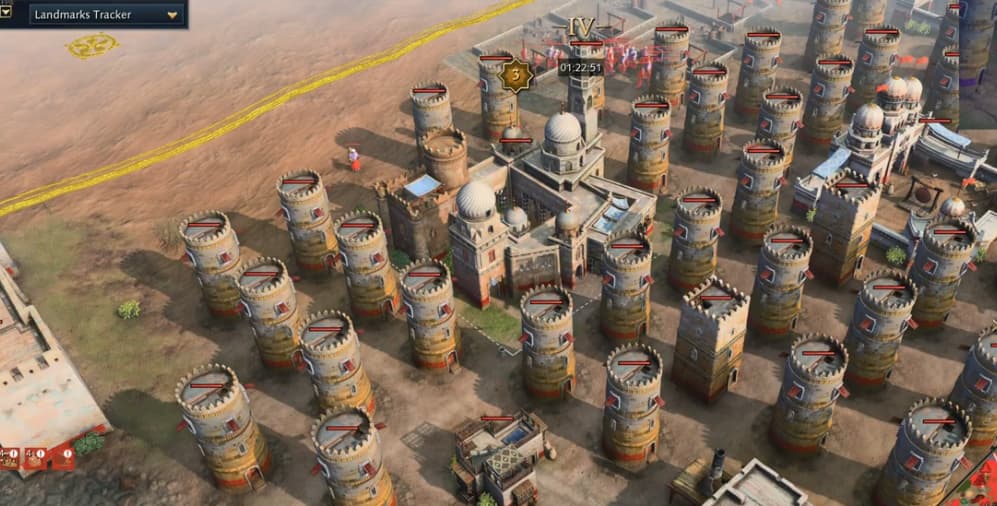 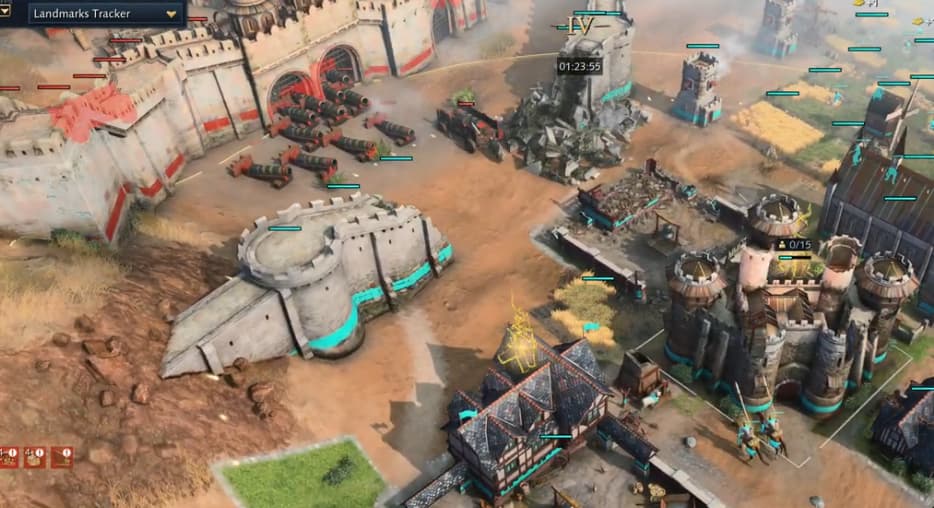 So boring to watch or play, you need so many unit to take town defense like this than the only solution is to kill all your villager. Because a tower is a unit shooting than doesn’t use any pop space. The thing is they made this thing so ez to build than it’s far more effecient to build them everywere than to build real army with the real capability to defend a siege.
What do you need after that ? canon to kill every siege. It’s garbage.

looks like you’re playing on turtlemaps and on low ELO.

PLayed plenty of team games, I don’t have this issue.

Never ONCE have I had a non-custom game where people cover half the map like that in towers.

While I agree, I am personally not a fan of lategame.
I like early Dark-age fights into early feudal fights.

I am gold 3, it’s like where more of the player are.

The screen are from the last game streamed from drongo on FFA with pro player allied each other for point and it’s each game ending like this + a wonders.

But I can put screen shot from regular 1v1 from my own game when a massive amount of defense have to be kill. Like 3 english + castle + monument castle in the front line, a wall, tower, massive amount of treb and anti siege and just a few unit.

But let’s say it again, from all of my friends, non of them is actually continuing playing the game because of that, and theyre diamond player from SC2, witch is far more hard to master than AO4

This describes 90% of my late games. Incredibly boring wall tower and keep fests that you have no hope of getting by. I usually just end up quitting or surrendering at that point out of boredom so I don’t waste anymore of my limited time that night trying to in vein to get past it.

If anything it’s made me look towards AOE2 more even though I’ve never played it. IF it’s late game is more exciting then this stone wall fest I may have to switch.

Mostly, i Agree…
Gold is infinitive, a lot of strone and stonewalls are cheap as dirt, no upgrades for rams… bombards is only option.

But you need to recognise that it’s different skills…and different games…
Sc2 is about micro/tactics… aoe4 is about strategy/mapcontrol.
You used to click a lot but in AOE - you need to attack with small forces from different angles (just A-click on different positions ).

Turtle and then boom get out when your are ready.

at least you have SS and relics, which in theory should give a win against turtle.

If anything it’s made me look towards AOE2 more even though I’ve never played it. IF it’s late game is more exciting then this stone wall fest I may have to switch.

no, this was a big problem in all other aoe games for me and i like it alot, that you need siege weapons.