there is a new version of my combat simulator.

It now offers the feature to pick civs. The units you can add to an army depend on the picked civ and their stats depend on the techs available to the respective civ and its civilization bonuses.

Additionally the user interface has been brushed up a little. It now displays information about the stats of all units.

Feel free to send feedback, suggestions for improvement or report bugs. It helps me to improve the simulator!
But in case you doubt the simulator’s correctness for a specific matchup: Please test the respective matchup in AoE2 DE at least once before posting your assumption!

Important: The simulator hasn’t been optimized for mobile devices yet! 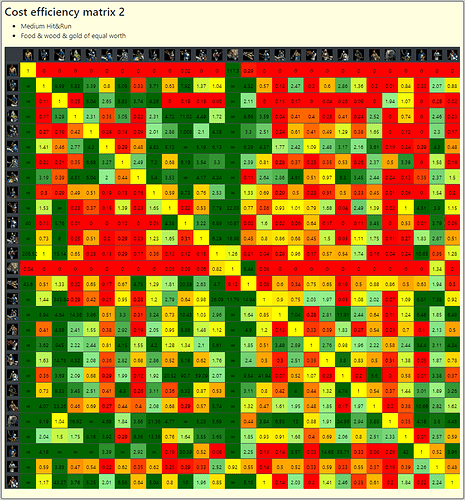 Feel free to send feedback, suggestions for improvement or report bugs. It helps me to improve the simulator!

i think its really great, well done man! tested a few things and they all seem to correspond, thanks for putting in the effort and sharing this

that extra bit showing the unit stats was a nice touch

Feel free to send feedback, suggestions for improvement or report bugs. It helps me to improve the simulator!

in reality in 1v1 its a 50/50 split and in groups teutons win every tim, and im assuming this is down to the AI’s terrible method of choosing targets, as opposed to your sims method, which i wish was the case in game…

Hi and thanks a lot for your feedback.

(a) As to the 50/50 split in 1v1: I really have no clue what’s wrong here. In theory, looking at the numbers as I’ve explained above, my simulator should be absolutely right here.
(b) Concerning the group fights: It’s possible to entirely deactivate influence of the AI/character in the scenario editor (player tab), maybe that helps getting reliable results. Also you should patrol both groups into each other using triggers. If only one side patrols, the results will be distorted.

Thanks again for your feedback!

Very happy to read that

(b) Concerning the group fights: It’s possible to entirely deactivate influence of the AI/character in the scenario editor (player tab), maybe that helps getting reliable results. Also you should patrol both groups into each other using triggers. If only one side patrols, the results will be distorted.

sorry you were right, i had only lined them up and left them to fight, alternating civs around to create an “unbiased” test. but if i patrol them then we receive the same results.

It would be interesting if you were to extend this to allow buildings to fight. Where the building is destroyed, the time taken to destroy it could be an output. It would need to be limited in some way, e.g. maybe only 1 side can have a building, and it can only have 1 building. But this would let us easily see how many elephants you need to take down a castle, for example, and how the time to destroy it varies with the number of elephants.

@phoenix1089
Of course in order to fix or adjust things, first I have to understand, what exactly went wrong. I’ve mainly taken the numbers and stats of unit types from https://ageofempires.fandom.com/wiki/Age_of_Empires_Series_Wiki
Maybe there is something wrong with a few numbers there?
Looking at the math (as explained in my last post), my simulator should be absolutely right with its prediction in the specific matchup you have described.
Do you have an idea what could’ve gone wrong?

@breeminator
That’s definitely a possible addition in the future! But there are some other things that have a higher priority currently (for example different ages or units of different civs for each side). But thanks for the suggestion!

@TohoBuWaha
I’ve released it an hour ago

it’s about the cost efficiency of different militia in post imperial!

This is really neat. Are there future plans to build this so it can be tested with units in various stages of upgrade? (i.e. different bs ups).

Thanks for putting this together.

Those are definitely also excellent things to add to it, you are doing great work on this simulator!

I just wanted to have a short look at the videos but ended up watching the whole thing xD
Very well done and explained!
It was interesting to go through all the data and draw conclusions from it.

A thing I learned is that it’s probably a bad idea to go for 2HS as Malay before gold is about to run out.

I only disagree with your choice of Bulgarians as one of the best militia lines in situations with gold still avaliable. They might be if it only comes down to doing things Champions are good at (which this video focused on), but their lack of HP should be a serious downside against ranged units, so I’d rank other top militia civs higher (Japanese, Aztecs, Vikings (especially Vikings should be a lot better as allrounders) for example).

@csaArmistead
Ty! I’ll probably add support for castle age and feudal age, but I don’t know if I’ll ever implement the option to add or remove specific techs/upgrades for a player. That would be a lot of work.

@TohoBuWaha
Thanks as well for your feedback!
I didn’t intend making it 17 minutes, but there was just too much stuff to present

Yea, the Malays’ 2HS are really pretty weak before gold runs out entirely imho. Obviously that’s very unfortunate in team games when you’re able to trade cause then they will very rarely be a viable option - except vs. eagles maybe

And yes, I can certainly see a point in prefering other militia lines to the Bulgarians’ one. Maybe I’ll do another video about militia lines vs. unique units which could give us even more information which militia lines are the best in most situations^^
Yes, the Viking champions were really strong as well! Trading cost efficiently vs. paladins and most other cavalry unique units is pretty impressive!

Thanks, that was indeed very interesting, made it really easy to compare Franks paladins vs Lithuanian paladins with different numbers of relics to see how the balance shifts. It’s the sort of thing that is easy to take for granted when it’s there to be used, because it only takes a few seconds to find the answer, but I know it’s a lot of work for you to create this simulator.