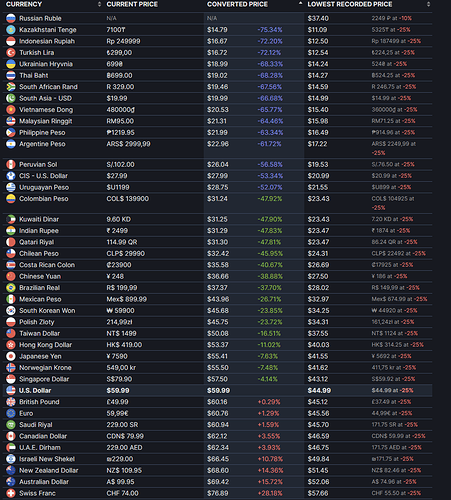 Pretty stupid if you live in some countries you have to pay more than what the US retail price is.

i paid $100 in australia, its kind of given everything will be costlier here.

Pretty much everything costs different in different countries. This is why there are tons of cost of living metrics out there, which relate to things like how far the average wage goes, strength of the economy and fiat currency, and so on.

Do we have a list of other major releases and their pricing as well? Is this pricing comparable to those other games? These need to be answered in order to determine if it’s “stupid” or just normal.

Moreover I believe the cost to buy aoe4 outright is artificially higher in order to encourage gamepass subscriptions.

Artificially higher than . . . what? The price you’ve set in your head?

Aussies get badly hit by pricing on general. Canada too. It sucks, but if folks are just gonna invent conspiracy theories, what is there to actually discuss?

microsoft pricing their games considerably higher is purely because they want people to buy gamepass subscriptions. have you seen the cost of their new flight simulator?

i’d say it worked perfectly as they got sold really well despite the high price. for an unfinished game like aoe4

I mean, a lot of new games are and have been coming out at that kind of price. People were shocked when Civ VI was what it was, and that was half a decade ago.

Everyone can think it is or isn’t worth their money, for sure. Especially with how much everything else in life is costing us. But games going up in price isn’t unique to Age IV or even Game Pass games.

I mean $60 is regular pricing for a triple A title. But I would say that it is still seems high for aoe IV. It would make sense that they charged a bit more then they normally would to try to get people onto game pass, since everything is being pushed towards subscription . If they can get a lot of people to switch they can get more of a passive income and maybe make more money long term