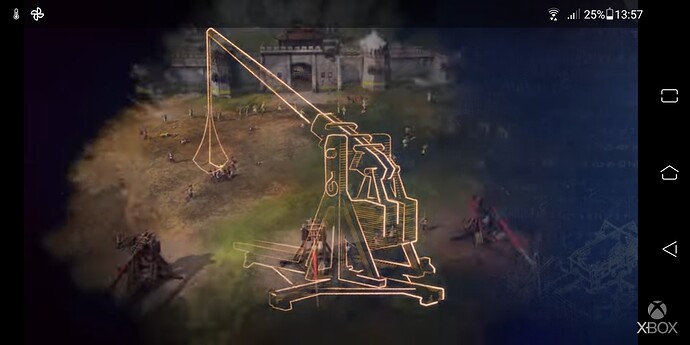 Too bad the zoom level is so close, no one will ever see anything even close to this happening (never mind the angle).

In general, I like their scale*. You can say a lot about unit proportions etc. but IVs trebs definitely look more imposing than ones in II.
Trebs are my favorite siege unit so far. If I have to set it up at least I want to do that safely away from enemy fire.

edit: * packed trebs should be scaled down. ALL siege units in packed mode are just YUGE.

so what is that other machine that looks like a trebuchet but is propelled by rubber bands?

Sadly i din’t get into beta but i hope people really made the point that it’s too far zoomed in and the camera is not vertical enough?

With totally out of scale production buildings (too small) and walls (too large), that was my most important point i wanted to make.

Crew on siege would be great too, obviously.

I know what its meant to be, its meant to be a smaller version of a treb that is fast firing because 20-30 people would pull on the ropes to make it go, but without crew it looks like rubber bands. I absolutely love this movie. It was generally really good. (nobody cut through armor like butter)
I love that they showed that the siege took multiple days/a long time.

so what is that other machine that looks like a trebuchet but is propelled by rubber bands?

You mean a mangonel?

The trebuchets at 5:11 are clearly bugged versions of the treb that miss the part of the 3d model that is the counterweight.
It is really funny that this got past whoever was in charge of approving the video.

The counterweight is the only reason the treb can function.

Now that I look at them again they also miss the part that is the basket/swing that has the projectile.

Nice eyes man, I did not noticed it

They are actually a different type of trebuchet.
Not a glitch.
It seems not all civs will have the same type of treb.

Its called a traction trebuchet because the other end is literally powered by people pulling it.
Whereas a counterweight trebuchet makes use of a heavy weight at the end to make the force stronger/easier to use.

I know what its meant to be, its meant to be a smaller version of a treb that is fast firing because 20-30 people would pull on the ropes to make it go, but without crew it looks like rubber bands.

You have it right.

I hope that is the case it is a buggy model, but it fires completely different and is actually a different arm. unless you have the beta and know something I do not it seems like a different type of siege unit. Exactly like a kind that did exist. So maybe it functions more like a culverin for anti siege.

The counterweight can also be and was used by people pulling ropes. but they were not the kind that would fire 300 yards and 100kg stone. but essentially its the same concept.

no that is not a mangonel at 5:10. mangonels use torsion powered springs.