AI allies will sometimes abruptly stop fighting in the lategame

Sometimes, late in the game, AI allies will suddenly stop fighting and just sit there with all its troops in its base. It will defend its base, but stop going on the offensive. No number of taunts or commands will get them back up again.

More details in the “Image” section below.

The AI is supposed to be attacking and defending as necessary, not keeping its entire military idle.

Here are a few pictures. I have written a short description for each image under the picture. 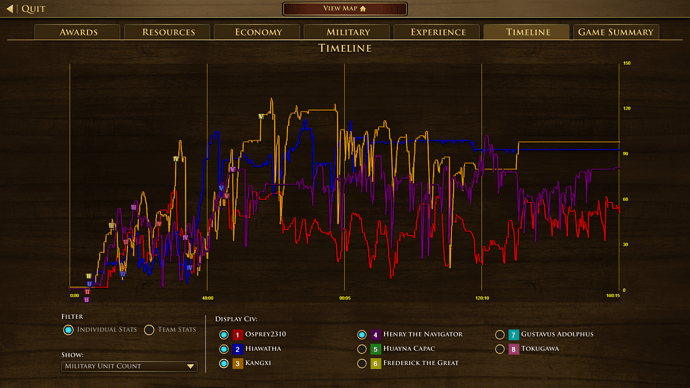 Military Pop Stalls1920×1080 2.61 MB
Note that the Chinese and Haudenosaunee AI have a fixed number of units towards the end as they have stopped fighting. 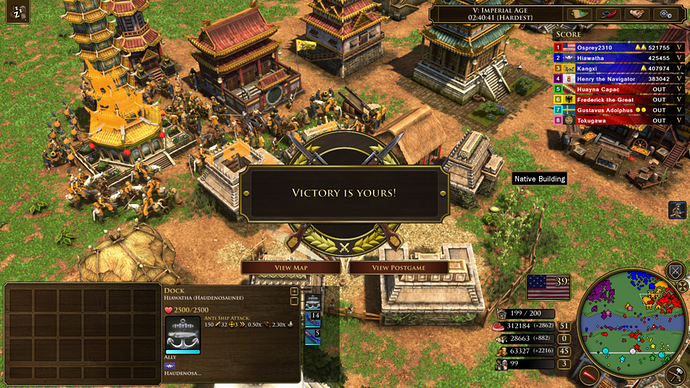 Units doing nothing960×540 1000 KB
Here you see the entire Chinese ally AI sitting in its base doing nothing in the lategame. Towards the beginning it was quite active, but suddenly it just froze up. Not building ships960×540 841 KB
It has also stopped building ships. At first I thought it’s because the AI has no wood. I tributed Kangxi some wood, and he still didn’t build ships anymore. In the mid-game, he was actually building ships as required. 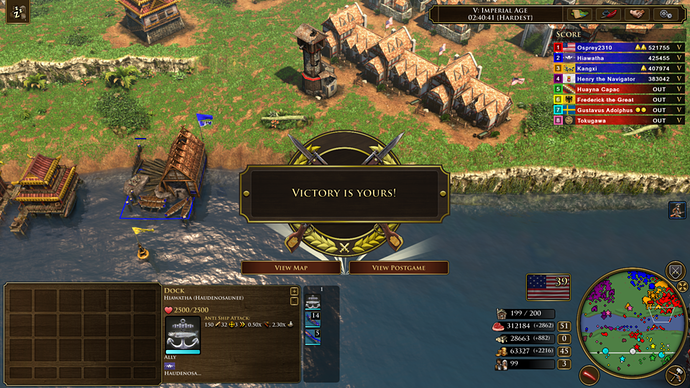 Canoes garrisoned960×540 847 KB
For some reason the Haudenosaunee AI has garrisoned its canoes inside the dock. However, I think these canoes have units in them, and these units (taking about 90 pop space) are stuck in the canoe, which is in turn stuck in the dock. There are no Haudenosaunee military units on the map, but the timeline says there’s around 90 pop worth of military, so it must all be stuck in the dock! Maybe I should make a separate post about this issue??

Here is the recording of this match (which by the way I enjoyed a lot). It was a 3 hour long match, so the recording is huge. I’m pasting a link here:

Yes, I can confirm this happens almost every game in late game which is around 45 minutes.

The devs really need to dedicate a patch just for the AI imo.

there is 0 wood. The AI can not play without wood.

No, it seems related to player scores. It seems the AI prioritizes agression now based on player score. In late gane, one player gets a lot of score so everyone just stops attacking.

How does that make sense, if the score is high, they should attack them no?

No. If the score is too high they just stay in base defending.

Thanks for responding to the thread guys. The score being the issue makes sense. Somehow it only applies to the allies - the enemies attack just fine. Hopefully the devs will take a look at this, since playing against the AI is really all I do to enjoy the game.

Enemy AI stops attacking too. I play vs AI ffa, and if i have the lowest score, all AIs will attack me. If I gain score, AI will leave me alone. If I am left with just one AI and I totally outscore it, it will just stay in base, but react when attacked.