AI is still too passive on some campaign missions (hard difficulty)

I was playing through the last mission of the third act (Last stand of the Boneguard) and noticed that the AI didnt even try attacking me once! Instead it will choose to gather all of its troops on an arbitrary place and let them sitting there for the rest of the game.

This always happens when trying to play the mission

Somewhat challenging mission where I get to massacre hordes of enemy troops. 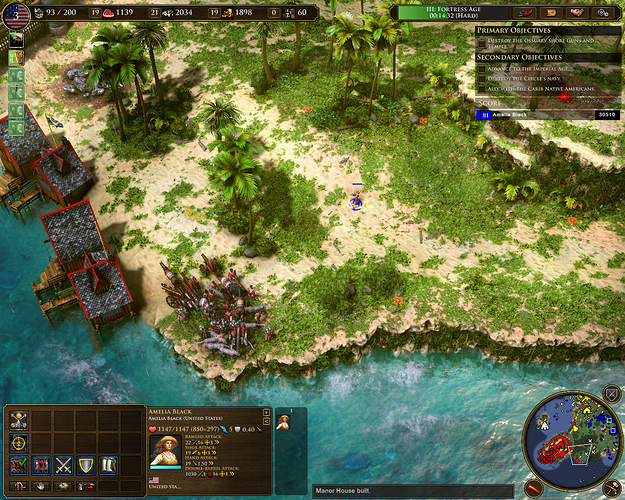 I’ve finished all of the campaign content, but I’ll replay some missions later to spot other underwhelming missions. Feel free to post your own findings in here

Mission: ACT I - Temples of the aztec

In this particular mission you’re supposed to defend aztec temples from series of Spanish attacks, but the AI still refused to make a move, instead it massed a big army and let it sit on its base until I swoop them with the Tenochtitlan army. 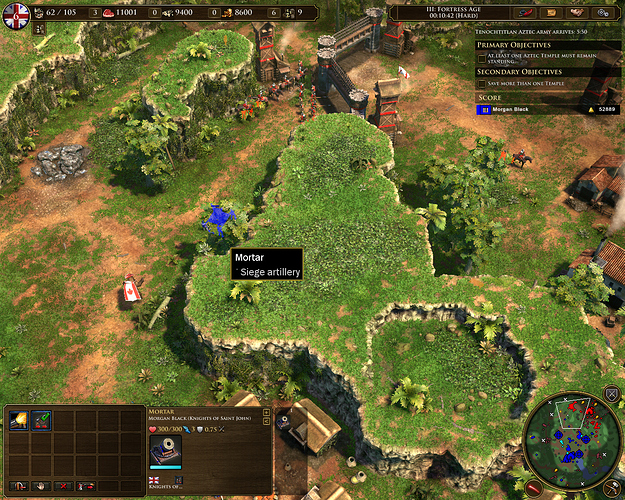 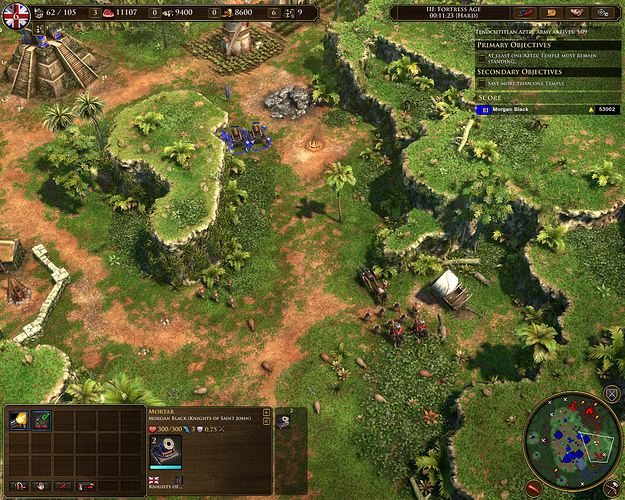 you should put this in the “aoe3-ai” category of “Report a Bug”. So the devs can see it more clearly.

Mission: ACT I - The Fountain of Youth?

In this mission you’re supposed to destroy the fountain of youth while you try to fend off the attacks from the circle of ossus, however. Alain seems to be reluctant about sending troops on their way.
In fact, once you gain control of the lake it’s basically over beacuse you don’t get pressured via land attacks.

It’s also funny when Sahin shouts “WE’RE BEING ATTACKED BY LAND AND SEA”, beacuse you’ll only get attacked by sea, red troops are too busy having a party below their TC (be careful if you decide to attack them though, they will send a horde of boneguards and dopplesoldners at you). Also Alain comes in way too late in order to protect the fountain, he should appear sooner. 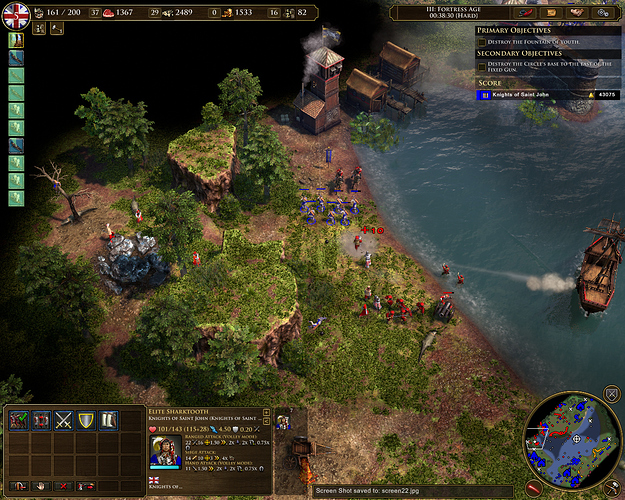 The first part of the mission is alright (not that the AI played a big role there), but when the second phase starts (Warwick takes your starting area), he won’t attack, he’ll play the “defensive game” and lose, beacuse the player won’t be harassed (sometimes he’ll attack you at the start with 5 longbowmen and some musks, but that’s it for the rest of the mission).
Another strange behaviour that I detected is that the enemy AI will start sending (and losing) settlers to the mine that’s located near where you get the Town Center wagon, no matter how risky it is, they will keep sending them. 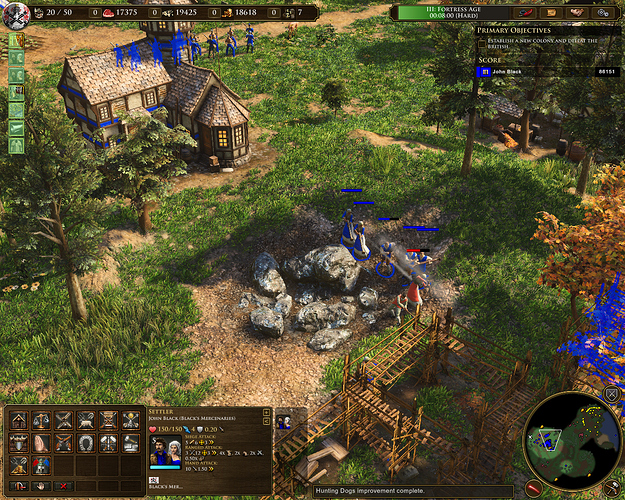 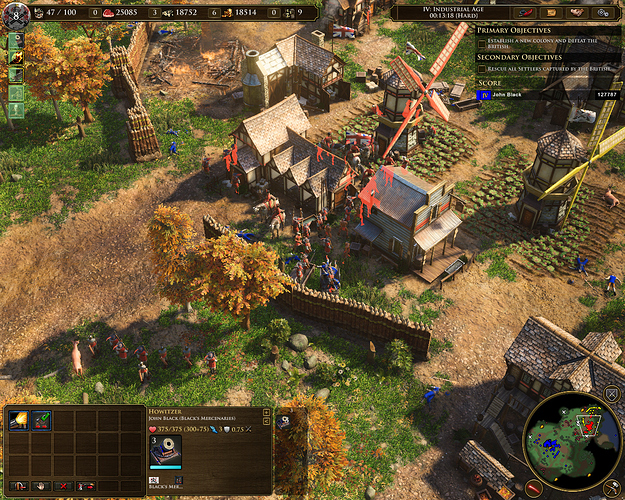 I think those are trigger bugged out.

I’m not replaying the campaign until the AI issues have been fully addressed. Kudos to the devs for the improvements made in the most recent patch, but there’s a lot more to be done, especially in regards to their aggression and gathering.

Here’s a link to an in-depth topic of issues with current AI.

So I’ve played several games, and I can confirm the AI is still far too passive. While there is an improvement, they still don’t quite attack enemy bases frequently, and if they do they pinch the outskirts and then retreat. So a few areas there needs be improvements in: Gathering: earlier farms and plantations as they seem to delay these until very late (post Industrial Age and sometimes Imperial Age). Smaller natural resource gather range/lesser priority for natural resources after Comme…

Campaign AI is really broken sometimes it feels kind of ok then some mission it does almost nothing even your allied AI who you are suppose to protect is capable defeating your main enemy for example last stand of circle your ally was pretty much able to destroy circle base without your need because circle army stood in one place near one of his dock and even when my culverines opened fire they just took those shots in and did nothing. Only thing that was able to keep anything at bay was their fixed guns.

Thank you for all of this information! I’ve compiled all of the examples provided here and passed them along to the team for review!

I can also confirm the very disappointing AI on hard level in the campaign storyline. The AI’s villagers are just standing around the town centre not gathering or building or attacking. No challenge or fun at all :(.

Hi,
Is there any update to this issue? There are lots of campaign missions aside from the listed ones where the AI tend to send its units to a certain point on map and do nothing. Something generic is broken for sure.

Most levels of the campaign are ridiculously easy because of the AI. I just played a mission where my only objective was to destroy the enemy base, which consisted entirely of a Town Centre and a few buildings because all the enemy did with their villagers was send them to gather resources near my town so they were continually slaughtered.

The whole game seems too easy. I don’t consider myself to be a good player, but I can easily win on Hard. Hard is not Hard. Standard wouldn’t even be a challenge to children, so how can that be the standard? (Also, Hardest isn’t even the hardest difficulty. The difficulty names really need standardising across the AoE games so players can more accurately estimate what kind of challenge they’re going to get.)