I played with 2 friends and myself on the mountain ridge map against two hards and the entire game they didn’t even try to attack. At all. They sent one single pikeman to my church and started attacking it and that was literally it. The whole game lasted 50 minutes and while they built tons of castles and other military units they were all just walking around their base unorganized and didn’t even launch an attack. I love the new graphics and the new civs, but honestly if the AI are just as braindead as before then what is the point?

I am pretty sure they are bugged on hard or below since if you check steam forums many people have exact same issue. I also played about 5 games on hard and not once does the a.i build a army. Just a few units at base with about 20 castles. Yet if you play on hardest or extreme they build huge amounts of units. The jump in difficulty from hard to hardest is quite large. I believe when the devs nerfed hard they broke something.

We’re indeed tracking a bug where the AI is training less army than intended on certain settings. If you encounter this issue try using a population cap of 200 or less as temporary workaround until the issue is properly fixed.

Also thank you for your feedback on the AI’s aggressiveness, we’re still working on the AI and any feedback like that helps.

Yup! I like that you asked, “what is the point?” You would think the Devs would know that people aren’t playin’ this 20-year-old game for fancy graphics. It is being played because it is FUN! Now, the ONE thing that EVERY avid AoE II player would have liked to see improved (from 20 or even just 6 years ago) is the AI.

Following what the Dev suggested, with the AI set on “Hard”, I lowered the population to 175, and the AI improved GREATLY! Yet, it still seems that artificial intelligence is not present, and it gave me the impression of an advanced calculator that was making moves which most human players would have had difficulty reproducing.

I don’t think that they AI is the same. For example, now the avoid castle and TC arrow fire. They accompany rams with villagers and repair them. The AI also responds more quickly to your army composition. For example, on Hard I was Bulgarians vs Magyars. They tried to raid me but I blocked them. When I started producing Halbediers they went archers etc. I raided two of their TCs and they moved their economy farther away by building new TCs and farms immediately.

I think these actions never took place with the HD AI.

Yeh, you’re probably right “WhiteMagick4”. My expectations are likely off the chart. But, I’ve played some other games where I could barely tell the difference between a human player and the AI. That impresses me! Maybe once they fix the bug it will be better.

I actually do remember that happening once in a while with AoE III. I would witness the AI do something totally different than I had ever seen it do before. It almost freaked me out because it was such a shock.

I do appreciate the improvements in AI behavior like finding safer places for economy, repairing siege etc but there is still a ton in need of development. For example, sometimes it seems to understand when it needs to send its units back because it’s facing a bigger army, counter-units or a castle, but then again a lot of the time this behavior backfires or doesn’t make sense in the given situation (like if the AI is actually winning the fight) or just breaks and it sends all of its units to kamikaze anyway.

I agree with DivineMetal433, as the increase in difficulty in my opinion comes too largely from the AI simply being faster rather than smarter. I think I’d much rather have the AI strive for improved economic efficiency, flank raids, unit formations and out of the box strategies that I’d have to react to instead of harder AI meaning just a bigger, more overwhelming swarm of units. Going into DE I was really hoping for a near-human-like AI capable of recognizing when to use vills to defend themselves and when to send them to safety, preferably before they are damaged, challenging me in outmaneuvering and micro, and with quick response times overall, like building counter towers. This is of course hard to balance with an AI, as with a person you’d always have some sort of a delay but the AI may just respond instantaneously, with omnipresence.

AI doesn’t attack before the 40 minute mark. This happens even on Extreme and happened during the entire beta as well. I think it’s just due to the AI being too defensive of it’s “home base” and refusing to move out. Viper just put out a 1v3 Extreme AI game and you can see they don’t attack him until the 40 minute mark.

You can always swap to the HD AI, that AI can hit hard early even on lower difficulties.

We’re indeed tracking a bug where the AI is training less army than intended on certain settings. If you encounter this issue try using a population cap of 200 or less as temporary workaround until the issue is properly fixed.

Also thank you for your feedback on the AI’s aggressiveness, we’re still working on the AI and any feedback like that helps.

Can you take a look at the Campaign AI…?

The campaign AI is bizarrely training and scatering units everywhere. They don’t create a ‘defensive army’ or an ‘offensive army’, the units move individually and suicide on you one by one.

The campaign is not very good to play right now.

Weird, what you describe is very far away from my experience. For me the AI periodically sends out attack groups, consisting of a very reasonable amount of troops. This is also what I’ve seen in most YouTube videos.

I´m having a lot of fun playing the campaign. Which campaign are you playing and on what difficulty? 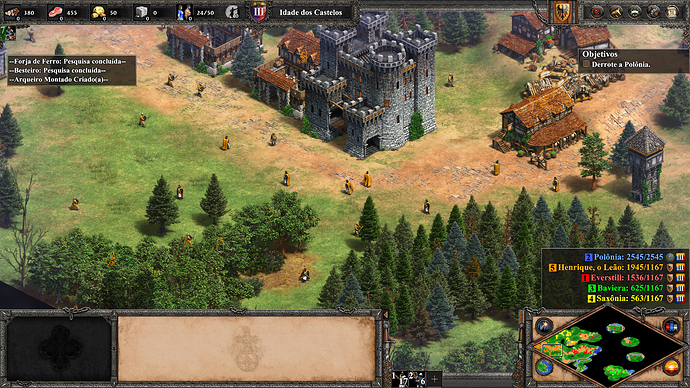 Here an screenshot example of the “Henry the Lion” mission.

I play on Moderate difficulty. Maybe it’s a bug that does not happen playing on Hard…?

Is this related to the afk issue? I haven’t seen that addressed yet.

What is the afk issue?

Happens to both default and HD ai. Both enemy and ally. There are idle vils everywhere. No new buildings or units are made. Lumberjacks walk long distances. It won’t attack. It’s just as if the ai stopped playing.

It happens seemingly at random, and sometimes it goes away if you keep playing, but usually not.

AI doesn’t attack before the 40 minute mark. This happens even on Extreme and happened during the entire beta as well.

What maps have you had this happen on? I just played against an extreme 2 days ago on Arabia and they drushed me with 3 militia.

In maps like Arabia where there is no water I would say the AI acts appropriate, atleast the times I’ve tried it, but if there is water the AI doesn’t build anything except boats as military units and well… they get crushed because of that, they also don’t use the boats. (on hard)

I think you’re being extreme and vociferous on purpose. With no real point made at the end.
An extreme AI could beat up 7 conquerors AIs (by the way, conquerors AIs did cheat, contrary to the new AI). The elites of this game consider that beating 2 or 3 extreme is an honorable challenge.

The hardest AI is way smarter, and that’s why it’s also faster.

Also, Microsoft made this game mostly to bring new players in. Not so much for people playing the game for 20 years. With a 20 dollars entry ticket, it should drive new people.

I’ve only seen them bugged in this way (never attack) on one Arena map when they were walled in from start (Hard AI, with 200 pop max). So it might be in specific circumstances when they can’t find their way. However, most of my games vs Hard on open maps 1v1, they played as expected. So I believe it might be a pathfinding issue.

It does, however, always seem to wait until it’s maxed out at 200 pop before attacking (in the 10 or so games I’ve played), and always goes for Fast Castle strategy, which makes it very predictable. Would love if it sometimes went more aggressive both early and mid-game, and used more unexpected strategies. Preferably you could choose this at the map start screen as a setting, if it should play economic, play aggressive or mix it up.

EDIT: Worth mentioning is that I usually play on Regicide, for the faster start, so this might be a reason why it always goes FC. However, I still think it could have much more variation built-in, and be more aggressive sometimes. I will try more Standard games and compare.

I suspect that I’ve always been looking for a game where more strategy was involved rather than my ability to multitask and learn keyboard shortcuts (things I’m not particularly good at). I’m guessing the “elites” of this game are a different class of gamer than I am, but if more people do end up playing, then it’s a win-win for everyone!