[Merged a bunch of threads on the topic.]

Just a reminder that we could use two things to help us see and identify the problem:

Unfortunately we have not been able to reproduce this problem internally, which is why we could use replays of the issue. Pass them my way and I’ll be sure they’re sent along to the team.

You haven’t been able to reproduce the AI standing around doing nothing, or that it always plays at a 200 population when set to something higher?

Also, have you had a chance to look over the replay that was posted of the AI standing around? Maybe it is a reseeding farm issue, but then all of the lumber vills shouldn’t be standing around as well. Or maybe it’s an expansion issue where they have no more space to expand and just glitch out.

These are two savefiles and the recording of the game that I posted the timeline of:
savegame.zip.txt (5.6 MB)
Just remove the .txt ending to extract the zip file.

Bumping this thread. I have played several reloaded multiplayer games where this bug has occurred.

The (hard) AI seems to do basically nothing in the reloaded game - no eco, no military, no unit commands.

Any fixes for this? Its insaninly frustrating to play for almost an hour and this starts to happen.
It happened to me playing with 2 humans and 2 to 4 AI… they suddenly stop responding and In my case since I created the match, my units and buildings just stop responding too. Sometimes they respond for a few seconds (just my units).
Here someone recorded the exact same behaviour although it never kicks me out in my case.

Just a note, its a similar behavior as when I save a multiplayer match… workigin fine, 2 humans 2 to 4 AI… no problem, I save it, and when I restore it all AI just stay still like zombies (actually zombies would attack at least).

I started a 200 pop 1/human 7/ai coastal map difficulty hard. I received some error message while on loading match screen. Then in game the Ai’s never started their base building the original villagers just started roaming. 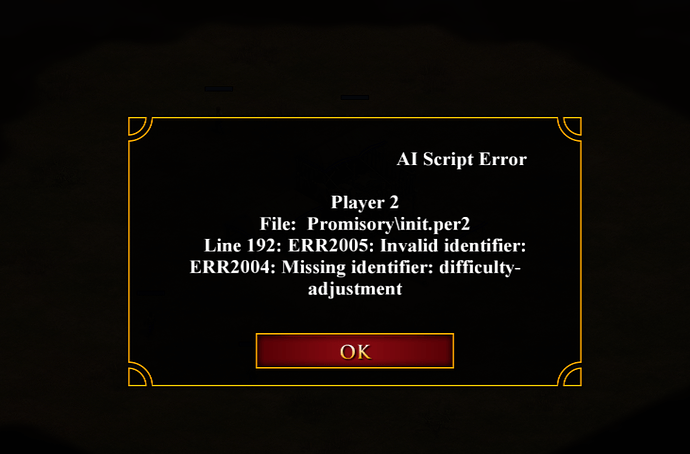 aoe2errorscreenshot974×642 349 KB
Hopefully I’ve given enough info to either recreate or fix. (I recreated it to get that error screenshot)

Hey @Ljenksnml,
thanks a lot for this report, we are now tracking the issue

Hey! Any news about a fix?

I’ve been recently back do AoE II DE for some campaign playthrough and I’ve stepped upon this issue, it’s really frustrating…

In which campaign scenario you had the issues?

It’s happended in the fourth part of the Tamerlane’s campaign. I believe it’s named “Rajastan’s Sultan” or something like that.

Although I’ve figured this issue has been going for some other campaigns. On Bari’s penultimate part - I so believe - it happened again, but that I played like one year ago. Problem was the very same: idle AI, not moving, not engaging in any fights, not training new troops, idle villagers all around… it’s really frutrating.

Hope you guys can help us out, thanks!