Alright and this needs to be stop, you guys just too emontional

I believe that the forum (targeted, subjective words) is then such a few people, and like to create additional accounts. No guts, it is a joke.

LMAO, his writing style and hatred towards china is exactly like Sugarygraph (the rainbow panda guy who got banned from the forum last week) XDD 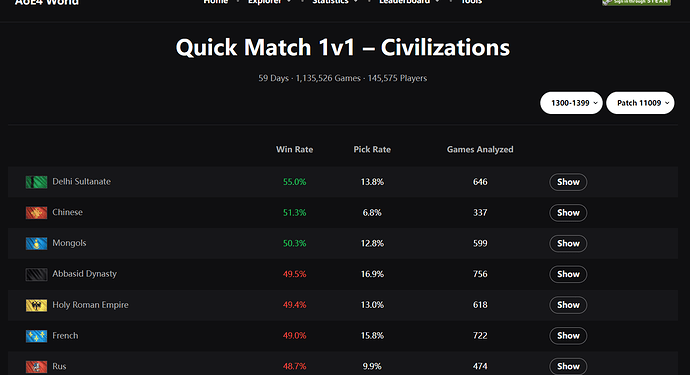 So once more, why are you cherrypicking data from the 1300-1399 range? When data from literally every other elo category has China as the lowest winrate

Cuz 1300-1399 could representing most average players’ performance.
Any player with more high ELO could not explain balance cuz they already good at this game. In this points the only thing effects WR are skills. Pro player could still beat you with Civs that you so called “bin” civs

And how does aggregate stats from higher elos not matter? Yeah, a pro player could still beat me with China any day, but in pro vs pro, or >1600 elo vs >1600 elo, we can see that statsitically the people who pick China are at a disadvantage. Not to mention the abysmal 4.2% pickrate in >1600 elo (compared to 10.5% prepatch), which means people at that high level know China is weak and thus are avoiding it. Even in your 1300-1399 range China only has a 6.3% pickrate - which means the only people playing China there are likely the dedicated China mains, which could also explain the higher winrate in that catagory.

Do you mean: Chinese players must have the operation level of viper?
Why use an example to represent the whole?