An Idea for a future expansion or mod: An Siam(Thailand)Civilization

With the addition of Inca and Sweden, it is obvious that the Asian civilization is vacant.

【Civilization Introduction】
The name “Siam” has been around since the Sukhothai Dynasty. Since then, the Ayutthaya and Thonburi Kingdoms have used “Siam” as the country name for several periods, and during the Chakri Dynasty, “Siam” was confirmed as the official country name of this country.

With the development of the times,Siam began to be oppressed by European powers. In 1855, the first unequal treaty was signed with Britain.
Siam has a deep understanding of Western advanced technology and culture, and has promoted modernization in the country, successfully preventing Siam from becoming a colony of foreign powers and becoming the only independent kingdom in Southeast Asia.

Make full use of the location advantage at the connection point between China and India and Europe, accumulate wealth, and gather businessmen and military mercenaries from all over the world. While being influenced by the cultures of China, Japan, Europe, Persia, etc.

r510001r75nr471nnp5616×831 89.8 KB
According to historical records, The plate armor and hand-held muskets worn by the Portuguese mercenaries are very good, which attracted the attention of the Thai military. They have imitated many of these plate armors and muskets., and the picture is a movie poster

Great ideas but it’s a contender between Siam or Vietnamese. Idk much of their history but two of those will be great additions to AoE 3 maybe even include the Koreans.

Siam because it is one of the few that was never colonized and it is right in the center of south-east asia.

Well India was colonized but there they are. Geographically, Thailand is not in the middle of South East Asia though. Unless you don’t count Philippines and the Malayan Archipelago.

I do like more nations to be included tho. Even better if from SEA.

It is a well known fact dude I am not saying anything new.

I think you meant that Thailand is in the middle of the Indochina region. Not South East Asia region.

Anyway Thai civ with elephants the Indians would be cool to see.

I think you meant that Thailand is in the middle of the Indochina region. Not South East Asia region.

seriously?
dont you know that changdao is a unique weapon of chinese, and so is naginata of japan
how come they become the thai unit?

There are many overseas Chinese living in Thailand, and even Chinese have become their kings
( Anachak Thonburi,鄭昭)
and hired Japanese and Portuguese as mercenaries,
The most famous Japanese mercenary leader in Thailand is Yamada Nagamasa.
Therefore, I designed it as a unit that can train Asian civilizations
By default, it is the diplomatic country of the consulate, so it can be explained reasonably.
My consideration is that if the design cost is not high, the development team can refer to my plan

Changdao in Thailand is called ดาบไทยอยุธยา, and Thai monks will engrave scripture on it 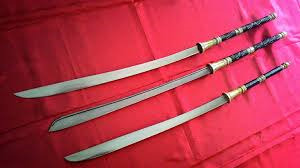 If ES wanted, they have 3 expansions to the game with 3 civs each. One for Africa (Morroco, Ethiopia, Zulu), One for asia (Persia, Malay and Siam) and one for europe (Italy, Austria and denmark)

I doubt that they will go 3 civs each dlc. I prefer to have Koreans instead of Malay.

Koreans were not as relevant as malay in this períod. Malay had an empire which was contested by the Portuguese and the Dutch

Korea was an independent, but albeit almost vassal state to the Qing dynasty.