An interesting (and probably wrong) observation: knights and cavaliers in DE

Correct me if I’m wrong, but it feels like knights in DE actually have a later-era helmet than the cavaliers. 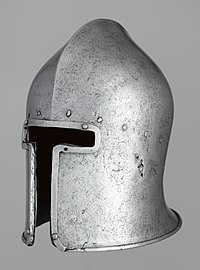 A barbute (also termed a barbuta, which in Italian literally means "bearded", possibly because the beard of a wearer would be visible) is a visorless war helmet of 15th-century Italian design, often with a distinctive "T" shaped or "Y" shaped opening for the eyes and mouth. The name 'barbuta' when applied to a helmet is first recorded in an inventory made for the Gonzaga family of Mantua in 1407. The helmet can be considered as a specialised form of the sallet, both types of helmet being ultimat...

This is a great helm from earlier era: 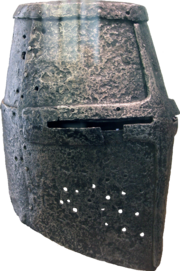 The great helm or heaume, also called pot helm, bucket helm and barrel helm, is a helmet of the High Middle Ages which arose in the late twelfth century in the context of the Crusades and remained in use until the fourteenth century. The barreled style was used by knights in most European armies between about 1220 to 1350 AD and evolved into the frog-mouth helm to be primarily used during jousting contests. In its simplest form, the great helm was a flat-topped cylinder of steel that completel...

Back in old AOE2 the model was low-poly so it’s hard to tell the helmet type (I thought he was wearing only a chainmail hood, but not really if zoomed in)

Oh well this is also the game were onagers come after mangonels for some reason, so this is entirely plausible too.

Yeah, you’re right. While it’s usually a lot harder than it looks to pin any particular design to any particular age the knight’s helmet does like like it has more advanced features, getting rid of the flat top.

It does have a more open face though, yet somehow less peripheral vision. If you asked an actual knight which helmet they’d prefer they could still pick the cavalier one because of that. In that sense it still works as a unit progression.

No.5 helmet seems to be the inspiration for the knights helm. 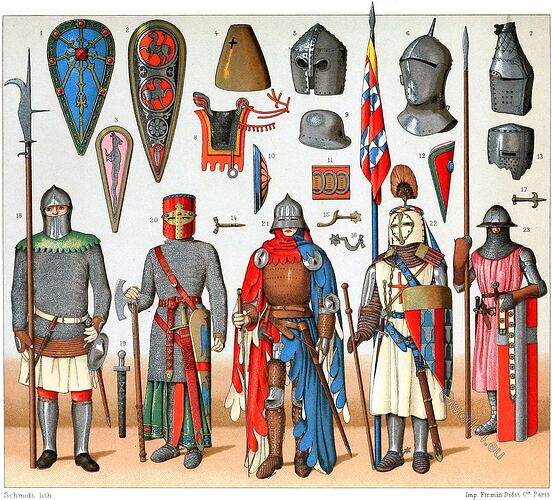 The Robert Guiscard model is probably quite accurate as a early knight unit.