Arabia, the most played map in the history of AOE II, and therefore the most modified one. It has been a roller coaster of changes, for a map that should be our stable staple. I’ve been “investigating” this subject ever since.

We’re still at a point where Arabia is a quirky enviorment for a high quality strategic AOE play to say the least, the influence of the generation of the map on the meta is beyond any other form of civ/unit balance we’ve had, and naturally that’s what we should prioritize when addressing the meta, the gameplay.

The Resurgence (TR) is a tournament that runs as we speak, hosted by JorDan_AoE, which gave us an opportunity to get introduced to a new generation of Arabia, this time, unlike ALL the other generations we’ve had in the last 2 years, it has more trees and less woodlines, which makes it dramatically different. Honorable mention to talented Chrazini who made the whole map pack.

*Excluding tiny patches of trees, and rare occasions where the generation seems to be off. Overall the consistency is high.

Check this game between TaToH and Villese for extra impression:

A Pettiton to turn this TR Arabia as the Arabia we have on the ladder, I’m calling the community and the developers to refresh and adapt into a better sustainable generation of Arabia. The best hybrid between the Arabia we had for 20 years and the desereted “open” Arabia we have right now. Less potential to Arena-wall it by connecting multiple patches of trees with endless palaside walls, and on the other hand no long Fletching-less Archers drying you out of wood because woodlines are 3 tiles thick.

It encourages a diversive play. more viability when it comes to civs and new strategies, and completely redefines the arguement about “openess” of a map.

Let me know what you guys think. 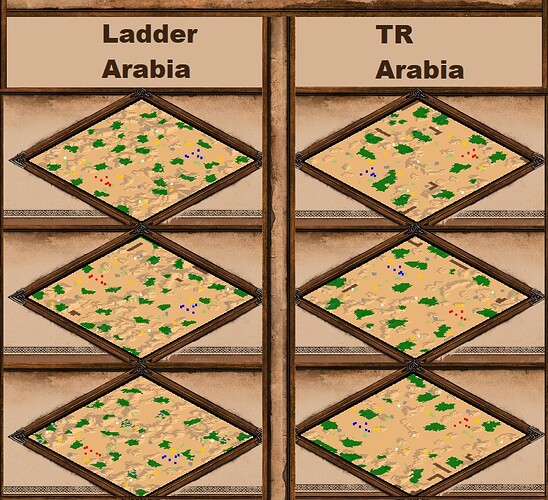 Am i the only one getting the impression that the TR arabia is also wallable? Just by the icons at the bottem doesnt seem too hard.

Petitions are against the rules. Also, didn’t the devs already implement a changed map by Chrazini?

@emarz4697 Every map is wallable to a certain degree, even Land Madness which is designed to be completely open. There are two point though we should consider:

In the current Arabia we have you cannot go 1TC ALL-IN unless you’re invested in a bizarre Tower Defence kind of gameplay. Even Hoang no longer goes for his famous suicidal push, he goes for a defensive Archery Range in almost every single game, playing meta-ish. We want to allow walling, yet with a heavy price, and at the same time we want to prevent a symetric defensive play (aka the pseudo aggressive skirmishers meta we have) by allowing them to be aggressive. Tiny woodlines mean you always have to stay at home babysit your lumberjacks, and later on commit to just adding TC’s which act as fortresses in an empty desert.

Currently castle age=crossbow age. I would like the previous arabia as well.