Anybody got latest update from Microsoft store?

There is no update seems to be published for AOE III DE (43871) on Microsoft store. Hard to find a game now since I can be only matched to people in the same situation as me looks like.

Same for me here my friend.

I’ve been trying to update since yesterday, still nothing to download sadly

I live in Australia and we are usually last to receive anything down here. I usually wait a day or two for it to show up.

All previous updates were available at the same time it was announced being available, for me at least. I’m started to think they did not do update in Microsoft store and only did it in Steam.

yes i got the update immediately on launch day 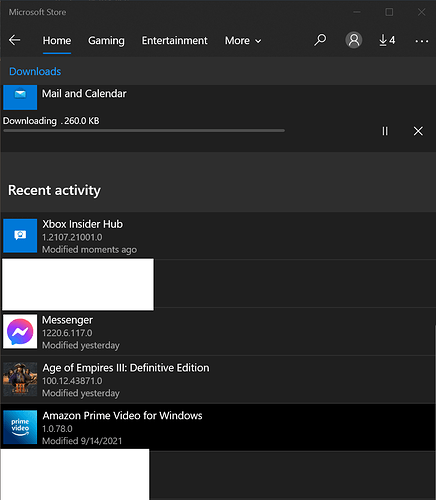 I’ve tried everything, and I can’t get the update

are you guys able to update other apps from your microsoft store app?

maybe try uninstalling and reinstalling the game, but i dont think that will help either…maybe try repair the game from settings apps

No latest update (43871). Bought the game on Microsoft Store Ask for Help

I uninstalled the game and redownloaded the whole game (all 42 gb). Now its updated. Only solution i believe. I remember this happened for an earlier update too.

maybe try uninstalling and reinstalling the game, but i dont think that will help either…maybe try repair the game from settings apps

Would not one loose all settings and customisation as a results (mods, shortcuts, ui settings etc)

I created bug here, so subscribe or mark it as +1 to let developers know something is not right

REPRODUCTION STEPS No updates are offered in Mi…

no because all settings and customizations are in your user folder not in game install folder. dont take my word, its my guess

its not really a bug for the game devs but rather for the people who push out app store updates. microsoft is currently working on the next version of the app store which has been completly revamped for windows 11, but i doubt it’ll be as good as steam.

but regardless, i havnt bought a single on steam and continue to rely on microsoft app store for games. not game pass user but i have some 15 day trial cards which i use when i have to buy a game from microsoft store as they are discounted for game pass members. i’ll use one to buy aoe4 after launch date. provided the reviews dont brand it a complete disaster and server population sticks for a few weeks. given their last aoe game aoeo was shutdown in a few years and i sunk a lot of money into it. i bought not just for myself but for my friends and family only to see it all go down the drain when microsoft decided to pull the plug on it.

solution: download the xbox App in de windows store, search for the game. after that you find the update… worked for me

Yes. Thanks, this works. How did you find it out?