I just looked into details in aoe 2 buildings and they made very well alot of details and you feel that is a medieval building. When I look into aoe 4 building models, they are also not too bad but not feeling medieval and not as much details that aoe 2 buildings. They look way more modern and less detailed than aoe 2 buildings. I think using low-poly models makes this issue. Does anyone feels the same?

I think the AoE2 buildings have more detail, but the AoE4 buildings look like they’re real architecture. They’re both pretty nice and fit their own art styles.

AoE1 buildings are bright and grand, especially the wonders.

With AoE2 buildings you can see the gritty tone of the game with the dark age seeming buildings.

With AoE3 buildings there’s a heavy colonial Americas vibe. It really seems like a functioning outpost.

With AoE4 buildings you can see the painting-looking architecture based off of real buildings. 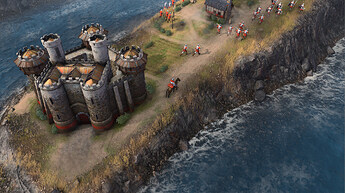 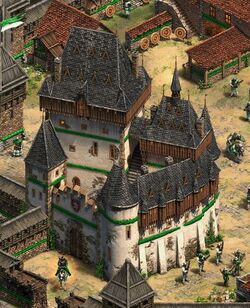 When comparing these two. It seem aoe2 castle more detailed and realistic than age 4 to me tbh.

It’s much much easier to create a realistic 2D image than a realistic 3D model that doesn’t take a beast machine just to render a building. If you want it to be even more realistic, just crop a real image and it would be perfect.

I’m sure they can handle a detailed and realistic models as a AAA studio with many employees.

This has nothing to do with it.

When you’re converting a 3D model to a sprite you can use as high quality of a source model as you want because it has no impact on how the game performs once the model is converted into a sprite.

If the models have to rendered in real time you can’t make them as complex without having performance impacts, which in turn helps inform the general artistic direction.

As for the actual style, that’s purely a matter of preference.

I’m sure they can handle a detailed and realistic models as a AAA studio with many employees.

As I said, it’s not just about them creating the models, it’s also about your computer rendering those models. More detailed models take up more resources, including disk space. That’s probably the reason why they make a separate 4K pack. I also think that you should also wait for the 4K pack before making the judgement.

The short answer, besides that you are correct - AoE2’s look a lot more detailed indeed, is that with AoE4 they wanted to keep the the System Requirements low for a 3D game so this is why we now have the average graphics quality that we see.

If 4k texture pack is that good why they didn’t even show once on videos. Who knows maybe it is just 4k monitors support only.

4k might make a difference when rendered on your local system (depending on how large your monitor is and how close you actually sit to it), but it’ll have almost no value in a stream.

So it does no impact on building models since textures aren’t magical that adds more details on buildings.

If you look at the house in the front of your house , you can see that houses are spheres ? No ? Then is not a polygon problem.

(Only chads can understand this joke)

Hold my beer Budha from AoE 3

So it does no impact on building models since textures aren’t magical that adds more details on buildings.

Textures can help by using shading to give the appearance of more polygons.

Increasing the resolution of textures is only going to help to a point where you can’t actually see the difference anymore (or your hardware can no longer display it).

This means that if you’re sitting far enough back from your screen you won’t be able to differentiate between 1080p and 4k textures because you aren’t close enough to see the individual pixels anyway.

For the streams you have the problem of the data needing to be transmitted, which can’t be done uncompressed with 4k resolution. This means you end up with compression to get the video to the point where it can fit through the same bandwidth that your other video fits though.

If the compression just ends up combining blocks of similar pixels to make the final product smaller, you just lost any benefit of adding more rows of pixels.

It’s not that 4k textures can’t improve things, it’s that the practical improvement is pretty conditional.

When comparing these two. It seem aoe2 castle more detailed and realistic than age 4 to me tbh.

The second image is a wonder not a normal castle.

It is not. It is Bohemian castle you can try it out.

The second image is a wonder not a normal castle.

It’s a castle. But the best thing about AOE 2 is their castles looked like mini wonders. They were mighty looking and cultural.

The only thing that sucked about them was that they were the same amongst civs of the same regional location. Wish it was more unique per civ.

AOE IV just uses the same base model and reskins it it.

Stop lecturing us about those technical details. People have played FPS know these things well.

The problem is, why buildings look so bad in aoe4 when other 3D rts games are doing well. No one complains buildings in aoe3, total war……

Stop finding excuse for devs. Just look at wonders, they are so terrible!

If we’re talking about realism, Aoe IV’s structure isn’t even a castle.
Its a Keep.
If you build a bunch of walls and towers around that keep THEN you would have a castle.

Partially true, textures aren’t going to add more polygons to the models, but textures are actually how most games create the much finer level of detail. Bump maps and things create the look of a textured image, affecting the lighting and shadows of the image, and making the flat picture look 3d. I don’t really feel AoE4s graphics “problem” is as much polygon related as it is texture related, as the textures look flat, unreflective and undetailed, mostly saturated with team colors.