Hello my friends!
So im a map maker and ive used all the models in the map editor 100x times over now. So i kinda wanna use new “decorations” or more even.
I was hoping the dlcs would add more but its not alot everytime they release new stuff. So im asking if you guys know of any mod that adds stuff like:
Statues, buildings ( like the nubian pyramids not actual buildings but more like decoration). Rocks, cool cliffs.
maybe trees. Flowers. Medieval market stands! I dont know i just think it would be cool to add a few things to
the scenario editor to make even more lifeful maps.

Is there such an add on? Or can someone actually make one if interested. I mean its hard to make moving unit models from what i hear. But a 2d sprite schoulnd’t be to much hehe…

Nah but im mostly looking for new models to make maps but would be cool if there was an universal
AOE DE 2 : The Map editor ADD ON mod And everyone was lik " dude you gotta get the add on mod "
" adds so much extra stuff you know ".

Wish the devs just did some improvements to the map editor. Top of my list are getting a dragon, having statues that face away from the player, and setting the zoom level to the default, which for me is max zoom.

Yea statues facing away would really help alot… But just more variation in general. I mean simple stuff to really make the medieval world alive. Not just go from what is in the original campaigns.

This is just a few things i came up with just now!

Runestone
Market stalls ( of all cultures )
Small brickwalls
Ruined brickwall
A BIG cross or bigger statues from european and asian civs?
Statues facing all directions.
(Wooden table
Throne : These three could be rock entities
Chair)
Fish hanging to dry
Fishing nets on hooks / poles hanging
pelts on a frame
Better “Paths”
Broken cargo like barrels and crates ( would go well with shipwrecks )
Guiliotene
Lumberjack “stump with an axe in it”
varying corpses
more skeletons like " Horse skeleton " “elephant skeleton” and so on " animal skeletons "
Weapon stands / armor stands ( for example military encampments or courtrooms ) Could be rock entity
A “knigths armor statue kinda thing”
wooden crane
Stone Stairs
Brick stairs ( you could place these on a hillside and units could walk over it )
minig props / mineshaft props

Hi man! Could I have a chat with you on what you are proposing? On Steam?
In any case, may I demonstrate what I had hoped to bring into the game, namely eye candy including trade goods and camel caravan units. See image on the right and particularly the trade goods I imported in from the Emperor Rise of the Middle Kingdom game which I seem to be having adding back into the game after some recent patches in past months… You can also see some buildings I imported in from AOE1DE. I did a few more than what you see.

Wow dude that looks so cool!
I think this could be exactly something what I mean!
I wonder though did you ADD stuff into the game or REPLACE?

Since my idea is to add stuff to make more lush worlds!

But I would LOVE too see more of your work!
Ive spoken to a few ppl on discord since yesterday about how they change graphics in certain games and groups that do that for special scenarios. I know a few ppl that know modding and they know more ppl and so on.
Maybe if we all put in our knowledge together we could have the " COMPLETE EYE CANDY MOD / ULTIMATE MAP EDITOR ADD ON / ESSENTIAL EXTRAS FOR MAP MAKING "
It would be so cool to be able to make exciting adventures.

I remember Galactic Battlegrounds added so many things to the editor so i could make so cool adventurous maps with it.

Bless you sir! Looking forward to see more of your work!

PS: I love Emperor Rise of the Middle Kingdom

We definately need more stuff! Would love to see more variation when in comes to flora, buildings, etc

Also hoping for scenario editor units from regions other than the civs (Nepal, Orissa, Ceylon etc.)

The Ratha unit has the archer/swordsman unit riding it. However, what I would suggest is added is the archer and swordsman units as foot soldiers as well. They are very well made. The ratha archer is wielding the Indian bamboo longbow which Indians were famous for, and the khanda wielding infantry unit could be an Indian heavy infantry unit, with both included in the editor. The devs don’t need to even make any new sprites. 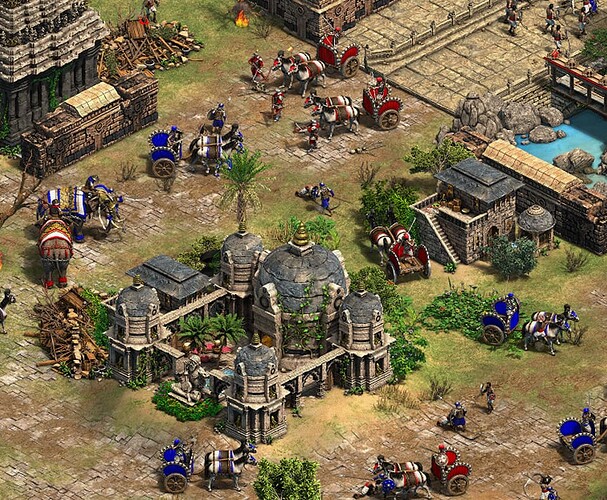 So there are no extra scenario editor units with this DLC? Not even new hero / special unit graphics?

I don’t know if this came with the DLC but there’s a new aggressive animal, some kind of waran from what I’ve seen.

Did you see the Komodo Dragon? It was added with RotR, comes in one of the Prithviraj Scenarios.

So there are no extra scenario editor units with this DLC? Not even new hero / special unit graphics?

That really sucks then.

Okay so the DLC contains:

Alot new of units ofc, Heroes and normal ( like since its dlc )
There new architecture looks amazing.
There is like a new “trade workshop” kinda thing that looks great for eastern market kinda vibe.
And a monument looking kinda similar with a tower.
Then there is “Indian Ruins” a few ruin models that looks really cool but could have a few more variations.
Then “Indian Statues” Finaly i get the elephant statue thats so amazing. And a few more cool things.
Thats basicly it though.

I still sould love to expand the eye candy in this game to make immersive scenarios. I really love map making.

I heard somewhere that you cant actually “add stuff” into the game like in a mod you have to replace stuff.
Is this correct?

The new heroes were quite limited in terms of new unit sprite skins. Most use the existing UUs. Sad. Very few new buildings added. I really hope we will get more material to use for the editor. The Qutlugh femalr horse archer unit is interesting though.