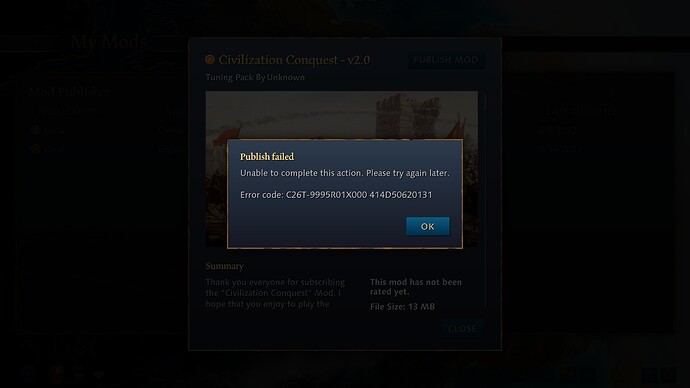 When I put my MOD files to another computer to play multiplayer game with my friends, the MOD is working without any problems or errors. However, the game client doesn’t let me publish it…

I submitted a ticket for AOE4 Support, and their first reply to me was to ask in forums and AOE4 Support closed my 1st ticket. Then I opened another AOE4 Support Ticket, and no help at all and it was one week ago (There’s been a server issue last Friday.
Were you able to upload your Mod successfully? If not, please try it again.
)…

Today, I opened another ticket as attached my MOD file that AOE4 Content Editor generates and I still wait AOE4 Support reply… Why AOE4 Support doesn’t help or try to solve this problem??? I have made lots of time to prefer this mod already. When I released it for one week before these problems started, it was +2000 subscription with 4.5/5.0 stars already from +30 votes.

Note:
This is my MOD.

Thank you everyone for subscribing the “Civilization Conquest” Mod. I hope that you enjoy to play the AOE4. \r\n\r\n
Please do not forget to RATE this mod and if you have any opinions to add more features, or if you find any bugs, bad data error, misspells etc. Please write a comment, thank you very much. \r\n\r\n
With this mod, you will enjoy to play with your favorite civilizations to do conquests against your opponents in a smooth and enjoyable way. Your battles will last longer and you will experience intense battles when you fight against AI or real players. \r\n\r\n
Previous “Civilization Conquest v2.0” Patch Notes: \r\n\r\n

-If you have any cool ideas you want to see in this MOD, please write a comment, thank you. \r\n\r\n \r\n\r\n

What do you need to do in this mod to win the battle? \r\n\r\n
-Always target enemy economy buildings and enemy villagers first, and then so whoever pushes efficiently with good tactics via constantly reinforced army will win the battle. \r\n\r\n
-Do not let your enemy to place more and more Town Centers. Otherwise, it will be harder to predict where the enemy forces come from and stop the Enemy Advancement. Thus, placing Keep / Castle buildings is very important to prevent any Enemy Villagers to sneak into your territory to build their Town Centers. \r\n\r\n -Always Control the Trade Market and Sacred Site\r\n\r\n
-The most important factor here is to have a good economy to supply your army and pressure the enemy. \r\n\r\n
That’s all for now! We’re still hard at work on the next version which they will soon begin its first testing phase. In addition, many other things are still in development. Release will not be soon. \r\n\r\n
Yours, \r\n\r\n
The Civilization Conquest Team.

Thanks for your post, we are looking into it.
-Seabass

I will look forward for your solution. Right now I cannot publish any mods. I re-installed the game with a clean re-installation, it didn’t work. Then I tried to publish it with my friend’s account and his computer it didn’t work too.

There is nothing wrong with MOD too; because when I build the MOD files in my friend’s computer - and then we still can play my MOD multiplayer with this tactic. However, this MOD cannot be published from game at all with this ERROR CODE: C26T-9995R01X000 414D50620131 problem. If the MOD was corrupted then we couldn’t play the mod multiplayer as the way I described above. I wrote and submitted this issue to AOE4 Support too but I still wait for a solution for 2 weeks already.

I will be really happy if you AOE4 Support friends would help me to solve this issue. I have spent lots of time and effort to make a nice MOD which I was able to publish it one time, but then I cannot publish it anymore; because of this ERROR CODE: C26T-9995R01X000 414D50620131 problem. All of this started with that server issues we have experienced 2 weeks ago which we couldn’t update the mods at all for 2-3 days and it was at the weekend. Thus, I had tried to remove it and re-published the MOD again, and I started to experience this ERROR CODE: C26T-9995R01X000 414D50620131 problem for +2 weeks already.

I will look forward your solution to fix this problem, thank you very much.

I’m not a dev, but had problems with publishing mods aswell. Is there anything in your warning log file?
It should be at
C:\Users[[YOUR WINDOWS USERNAME]]\Documents\My Games\Age of Empires IV

How to find information for troubleshooting with Support

In the event that you are experiencing technical issues when running the game, we first recommend that you work through these troubleshooting steps in our support articles. If there is still a tech...

It’s what helped me solving my problem

@Unauffaellig248 , my problem is solved itself but I don’t know how it is solved really. After 3 weeks, I tried to publish again and it worked 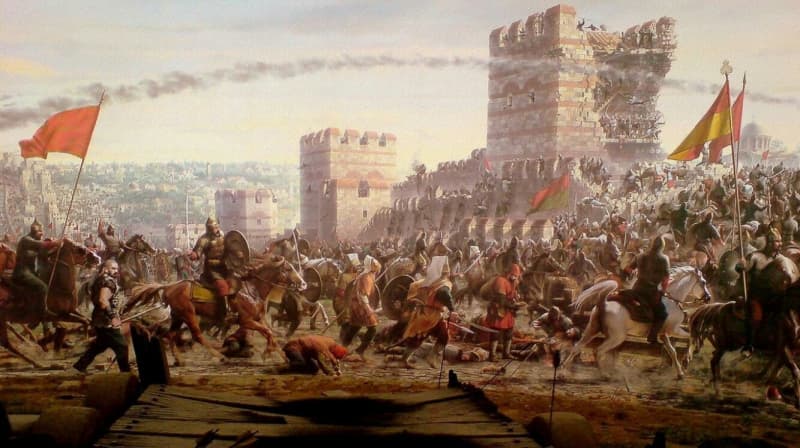 You can subscribe my MOD from here.
Civilization Conquest MOD

Please let me know if you like and enjoy the mod^^.

Great to hear!
We have been working hard on some of these issues recently.

I try to update my MOD from v2.0.3 to v2.0.4 ,but it doesn’t update to v2.0.4 in AOE4 Modding website and in game MOD research section (even it says “your mod is updated” with notification in game, it only shows as v2.0.3 and it is like that for a few hours already).

If it is possible would you look into this issue please? thank you very much.