The new arabia is bugged.

Either I play the same map over and over (i.e. 3 woodlines all to the back) or there are no woodlines.

Furthermore, the resource spawns are incredibly imbalanced, with one player having 2 gold at the back and the other having tgheir main gold forward and their support golds in the open far to the sides.

That’s intended and it’s the current map gen for Arabia, except for this part:

The woodlines are far away, so perhaps that’s what you’re seeing. If you have zero woodlines, that would indeed be a bug. Do you have a screenshot of one those type of games?

I can’t believe that, Arabia is for 1v1 balance. The way maps are spawning at the moment is insane. It’s boring (always 3 wood unless bugged which often happens), it’s completely unfair for either player and often the map is having an overridiing factor in the outcome of a game.

It must be a bug. If intended it needs to be addressed. All you have to do is watch any pro stream from the past few weeks new arabia has been out to see how unpopular it really is. 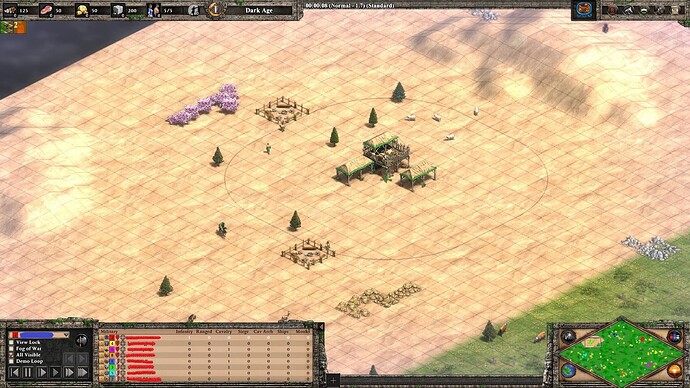 An Arabia map I played in today, my ally had to use my woodline. This is completely broken, its so annoying to have such an unfair disadvantage like this.

If you haven’t ended up with one of these wood less maps yet, you haven’t been playing much. 11

Thank you for pointing this out, we’re already tracking this issue

Many thanks for response

Any idea on eta of solution?

I hope you realise this, but in order to fix this issue, what you need (and I really mean need) is for rms terrain generation to have set_place_for_every_player, min_distance_to_players and _max_distance_to_players, in the same way that objects generation does. Official map scripts really shouldn’t have to rely on convoluted hacks, like the new Arabia does.

@Murken901 This issue is fixed in today’s release:

Fixed a rare issue where forests would sometimes fail to generate for one player in 1vs1 matches.

If you haven’t ended up with one of these wood less maps yet, you haven’t been playing much. 11

I have been, but apparently not 1v1s where this issue occurs.

I have been, but apparently not 1v1s where this issue occurs.

The issue occurred in TGs too. I’m honestly not sure why the patch notes claim it was a fix for 1v1s.

Non-standard numbers of players on larger/smaller maps no longer cause missing forests.

I’ve had 3 in 1v1s 11. It says rare, but I do tend to have really bad luck in general. I remember playing civ multiplayer and always ending up in the tundra or desert

Yeah, it happened with “standard” numbers of players on other map sizes too.