Are pings higher than they should?

I live in Greece. In general, the average delay (ping) between my computer and Western European servers is about 65-75 ping (UK, Germany etc), as I type this text. In games that I have tested, like League of Legends for example (its servers are in the Netherlands I think), I have about 69 ping while being on the menus.

But… in Age of Empires II: Definitive Edition, the connection quality panel shows pretty high pings every day for my standards. Steadily green remains only the Europe West, but the amount is close to 200. That’s not acceptable. UK West adds 50 more, even more unacceptable… like it is much more different geographically. Not to mention US East, that is about the same with the UK West and India West, around 250…

Shouldn’t we consider AoE 2: DE multiplayer structure and behavior, the same as every other video game?

If you played some multiplayer games then you would know that those pings shown do not matter at all. Playing on your nearest servers feels like playing with 30ms so who cares what the actual ping is or what is shown there.
Even playing on the furthest servers is totally fine.

Only issue is the performance lag from computers. Input lag is almost non existable.

ping in AoE DE is a bit misleading, since instead of referring to raw network latency it actually is a protocol-aware ping and is supposed to represent something along the lines of the total round trip latency for actual actions sent and received by the server. I think Minecraft also has ping that is “layer 7”

Well, I will agree with both of you.

Maybe the game not does a simple icmp echo/reply(ping) but how knows (have you a capture file?).
But i don’t think that this is a explanation. Because the latency is way to close for servers on different continents. I’m located in germany and take a look. 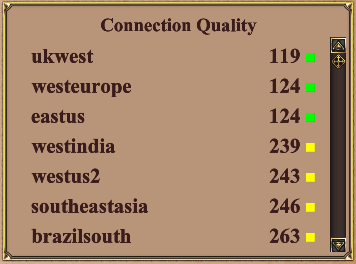 It makes no sense that “eastus” and “westeurope” have the same latency. I think that there is no server really located in europe at the moment, at least from what i see.

I haven’t done any sort of packet capture of it, just information that was communicated during an earlier stage of the game. Not sure if that forum thread is still live.

i have the same problem today and i am from Greece too . i just joined my age of empires and i have like 400 ping on ukwest and europe . last night i had 100 . please fix the problem , its not about my connection … my mbps is 100 and i have 10 upload… . we paid for this game…

In my case, the last 20 days, my pings have been stabilized to this image: 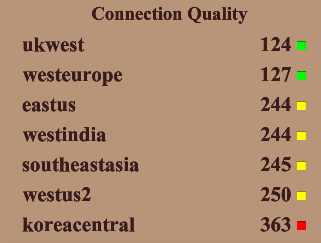 And that’s an acceptable image. You can play very well.

i just changed my dns IP . i used benchmark dns and i found my best and i put these on mine . feel better now . i have now like 110 ok ukwest . thanks for reply

Considering eastus and westeurope have more or less the same ping for me, I can only assume that the European servers are also located in the US.