Are sentinels the worst musketeer of the game?

at least for treaty games, and seeing the base stats I’m almost sure that sentinels really suck. At least in treaty seems that they can’t stop properly the calvary. They work better as a high HP settler that can build towers and forts on the battlefront than a musk unit.

I think it should cost 1 pop and have some HP nerfs. In industrial there has to be a card that restores its stats, but makes it 2 pop again. I think that would be ideal.

Am pretty sure them being inefficient is part of the intended balance of the civ.

I’d say they’re probably 1 of the best, they are 2 pop but very cheap for their stats so they trade really well vs other musks. Unfortunately for treaty they’re not as pop efficient because resources don’t matter as much though the age 4 card makes them a lot better in the latest pup boosting stats by 45%.

the problem is : sentinel 2 pop, fire thrower 2 pop and then huss goons 2 pop, so in late game you have an army at 50 unit against 100 unit ( approximatively ), then you had to play crossbow ( bruh ) and then what the point to having insane rocket card for fire throwers if you can’t mass them xD, idk its weird for me

As i see the sentinel.

1-Is the BEST musk quality/price in Game when figh near to urban center so, It is perfect to defend vs Rush.

I think it’s more to do with all the other 2 pop units as kevin said above, units you might also want to make are fire throwers or dragoons and they also take up 2 pop, you end up with half the size of the opposing army and it’s even worse if you have built a couple of fixed guns.

I feel like its meant to play into their defensive nature so they want you to push forward slowly with buildings to maintain defensive posture or use teleportation to turn from defensive to offensive.

I find they’re quite strong, but they really need a lot of cards to get there. At minimum, I think you need to send Sovereign Order, Papal Bull (and then buy Crusader Knights to make them get defensive bonuses from enemy buildings), then F. Rockets once you get to the Industrial age.

Still, I think they’re quite powerful, even with just the first two in the Fortress Age. The Crusader Knights tech is essential to making them usable outside your base though.

Would a card that lowers the pop of some of matla’s units but lowers their stats as well be too crazy?

I take back what I said, he’s the best musketeer in the game and thank god he’s worth 2 pop.
I think upgrading imperial should make them cost 1 pop, but before that, it should always be worth 2 pop.

It has very good HP and attack.
It can be upgraded a lot.
And it has 4.25 speed
Finally, from personal experience (clarified 1v1 supremacy) the sentinel is able to kill light infantry and dragons easily and win most musk fights.

…Which is why they should stay 2 pop.

They have alright HP, nothing major, like I see them getting an average of 400HP at the imperial level, and that card…wall guns or whatever, is useless. I only got a single range increase. That’s, that’s pointless, I was hoping it take them up to at least 14 range, maybe 16!

I think sentinels suck unless you have that rocket card thing, their charged attack. Then they’re great. But I am comparing them to the King of Musketeers, the Soldado, so like, not everything can be gold lol.

I only got a single range increase. That’s, that’s pointless, I was hoping it take them up to at least 14 range, maybe 16! 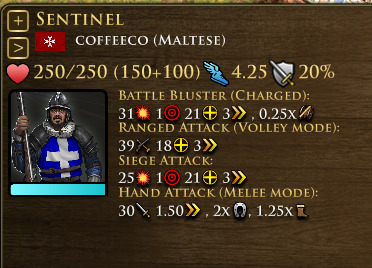 I think upgrading imperial should make them cost 1 pop, but before that, it should always be worth 2 pop.

I would suggest the same for the Ottoman abus.

Their max stat is like 70 atk with potentially 18 range, making them 1 pop would be kinda insane.

The range of the wall gun effect should be increased so that they stay at 18 range more often ( it takes like 20 wall segments - pillars not included, to get them to 18 range) - additional potential it also gives them some

Their boost around buildings can be increased in imp - it only provides 15% HP near ranged building (outposts, commandaries, forts). In imp it can be +30% HP and ATK

edit: the depot aura range should also be increased a bit at imp, enoough that one can cover the mass of 50

No way, how did you get that? I had like 20 imperial sentinels and got a range attack of 13, the normal one, not the battle bluster? Am I reading the card wrong…