Spain, England, Italy, and Dutch all seemed to play well. I would stick to Euro civs as the Asian and Native civs need some specialized attention.

Ok. Archipelago still shouldn’t be playable yet. I’ve got some ideas on how to implement a way to take new islands but lots of problems are arising.

It’s not the island hopping y’all might be waiting for, but it is some other cool stuff:

All the following moments are effectively AI vs AI:
Ships raiding fishing boats: 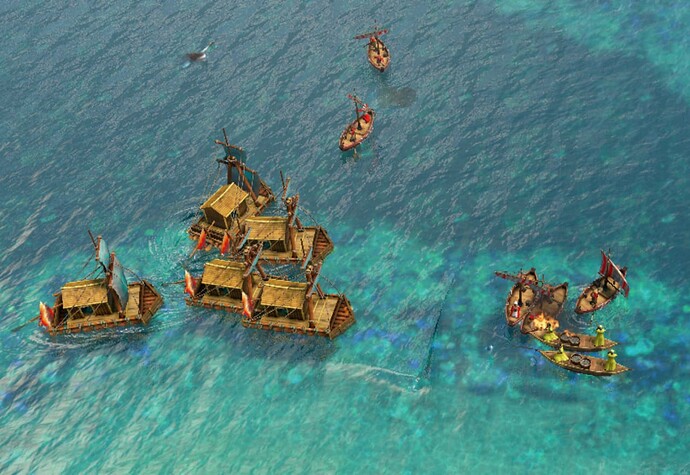 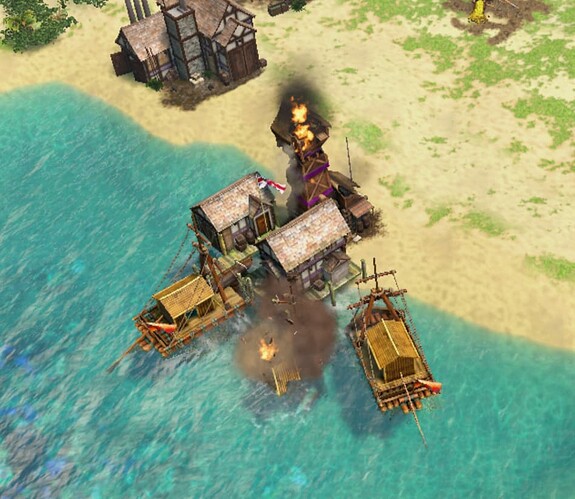 Castles building next to docks: 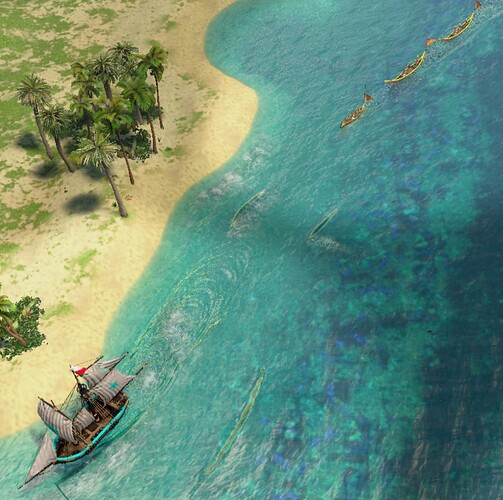 Last but not least, a decent sized naval battle out on the open ocean:

I’ve been playing some games with this and the previous update, you can really feel it coming together. AI now puts up a good fight at age 2. Still, I think some things need tweaking:

Now, I know deck behaviour is finicky, but there are some shipments the AI already has in its deck but never sends:

I’ll upload some recordings later in the day so you can see some behaviour too. I still hasn’t tried it on Amazon or with Allies, those are my next tests.

I was able to include most of those suggestions:

There’s still this issue where the towers keep building right next to each other.

As for Schooners, I haven’t seen anything excluding them so I’ll have to kick that can down the road. Admiralty, Extensive Fortifications, Heavy Fortifications, and Frontier Defenses are excluded despite seeming potentially useful, though.

I’m still working on the multi-island issue, but in the meantime I’m thinking of these two as well:

I can make the fishing boats scale to the number of fish, whales, and players. I don’t know how to tell a unit to garrison, but I can tell them to go to the closes tower or fort, which would be a step above what they currently do. Any thoughts on how that should be managed?

The wagon issue seems to basically just be a bug. There’s an existing rule that is supposed to handle it but it doesn’t work properly for whatever reason, even though it basically reads “is there an idle wagon? Build something with it”

I think I got the wagon issue fixed-ish. Portugal, age 2, TC right next to docks as it should be. Inca was a little slow to the ball but started using its wagons 30 seconds or so into Age 2. I think the issue was that the original function would assign wagons to an existing plan in the queue, but that plan might not show up for a long time. I just commented that part out so the wagon will follow the other logic and build right away, whatever it is.

Also, Inca joining the fight to… fish? You can’t tell from the picture but that’s the enemy dock.

If you can see it, there’s some fishing boats hiding under the TC: 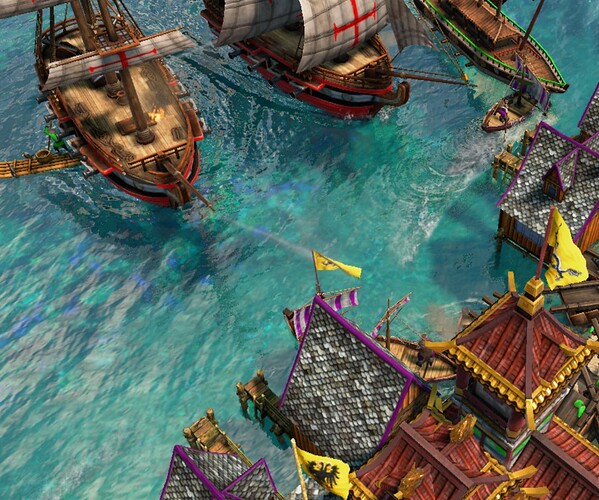 Oh boi this is slick! Keep up the good work!

I took a little break from AI coding and messed around with RM scripts. This is a reskin of Amazonia to convert it into the grand canyon (at least that’s the idea):

Ideally I’m looking to make a map or two with clearly defined choke points to force water vs base defense combat.

Hi! Hope you are enjoying your break from coding lol. I-ve been kinda full lately but I tested the last iteration of the mod. The AI now is a challenge in water, especially in age 2. I really liked it, and it forces me to spend resources stopping their ships.

Sadly, it seems it still has problems sending its galleon or equivalent shipment. I haven’t seen the ai build or send them in any of my games. They do send the mercenary ships and, when they age up to fortress, they also send the frigate. I’m still seeing they send their unit shipments after their first navy shipment when they don’t need them. AI usually have the 2 ships, a galleon like ship and some water upgrade card, many times extra attack. Those should have a higher priority, as a galleon in age 2 would help them defend a lot. As of now, they send the 2 ships, 700 coin and then their 2 unit shipment, disregarding some more important.

Also, in many many games, I still haven’t seen the AI build defenses in age 2, not near the docks nor anywhere. I do llike how they build 2 in a dock, is extra defence, but it should also build them in other patches of land, and then reinforce with artillery or alike. As many times the AI doesn’t build defences until age 2, and they don’t send their upgrades or galleon, they tend to fall behind at late age 2. Many times they don’t even age to fortress, when they should.

Another thing i’ve noticed is that the ai keeps struggling with dock locations, even more than before. In a previous build, the ai were more consistent in changing dock location. Now, they many times keep sending their villagers to a place where all my ships are. maybe some tunning here and there.

I’d love to try some too, I have an interest to resuscitate water maps in this game, and AI and new maps would work amazing. Hope you can update the mod soon too!